Plane Fish n Posts: 6,439 Admiral
July 2011 in Southeast General Fishing & The Outdoors #1
We assembled our team (Eric and Chad from Plane Fish n, Dan from Reel C's and Jerry from Lucky Us) for the trip to Islamorada.

We left on Sunday evening and drove for 3.5 hours from Palm City. :driver

We arrived at the Hampton Hotel and Suites which was a great place to stay. They have their own boat ramp (which is capable of at least a 31' that we know of) and wonderful docks. :crowd

On Monday morning, we awoke to 10-15 knots of wind and an occasional gust. The boat was launched and we went to have our full complimentary hot breakfast.

After breakfast, we drove to the Trading Post which has the most awesome deli sandwiches for our lunch.

Having to wait for the tide to be up a bit wasn't too bad and we finally left the dock about 8:30am.

We set up 2 outriggers, 2 flat lines and a squid in the center and started to troll past Alligator Light and in about 150', our squid catches it's first dolphin (peanut). Chad (aka the Sailman) brings the fish in. The day is looking promising.

Dan quickly grabs the rod and sets the hook and hands it off to Jerry who is still trying to catch his first Atlantic Sailfish.

Problem is, Freddy is pissed and lets Dan know it. We called him Psycho Fish (Freddy, not Dan). :cookoo

Chad and I backed up several times as Freddy decides he wants to impale Dan perhaps for a kebab that night.

Dan expertly removes the hook from Freddy and he was still so green that we let him swim off for another adventure. 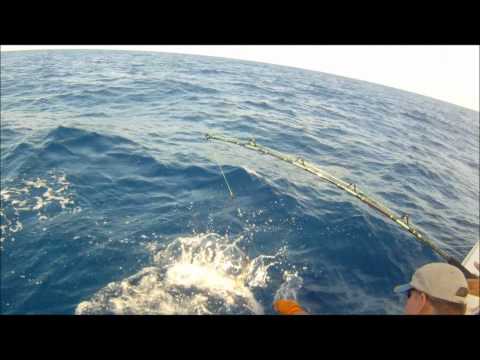 We trolled all the way out to the Islamorada Hump (285' to 560') and had several sail knockdowns. The seas were probably 2-4' at their worst. Very fishable and a nice ride.

We trolled from the Islamorada Hump to the 409 Hump and halfway, we decided to troll in towards shore.

We get a knockdown in about 210' and Dan quickly runs and grabs the rod nearly knocking Jerry and whoever else was in the way overboard. :hairraiser:hairraiser

Seriously, Dan brings in a barracuda and for the first time, my stainless dehooker actually dehooked a fish. I still don't like them but perhaps my technique is wrong.

We hit the channel at about 3:15pm, did a quick washdown of the equipment and the boat and relaxed by the pool and beach.

Monday night, we walked outside to check the boats and winds are blowing 20 to 25 knots. NOT GOOD!!!!

We awoke Tuesday morning to Small Craft Advisories with an Increase in wind. :banghead

We decided to scratch the day of fishing and just be happy that we had one good day on the water.

Jerry was amazing though. On 2 separate days, he managed to completely screw up making a waffle and caked up the machine both times. Lucky for him, the lady who was setting up the food didn't speak english and she just kept smiling and he kept talking.. Somehow they actually communicated.... perhaps in pig latin or something. :rotflmao:rotflmao

All in all, a great trip.

We missed Bo on this trip but I know he will be on the next.

Thanks Chad, Dan and Jerry for a great trip. :applause:applause