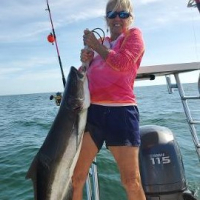 Ruff One HomosassaPosts: 2,080 Captain
May 2012 in Big Bend General Fishing & The Outdoors #1
The weather man was half right today. Morning forecast was for 10mph or less-wrong--more like 15mph and blowing constant. The seas were angry and made fishing in my boat a chore. Afternoon forecast was for the winds to lay down and they were right on. Since it was howling this morning, we decided to hit the first shallow water structure we could find. Settled on some areas in 12 ft. Decided not to anchor, so we made some drifts. On the second drift, Mrs. Ruff One hollers over the wind--here comes a cobe, and she's hooked up. This cobe fought like no other I've seen. He was more like a sailfish. He tail walked. He busted water like a bass. He ran line out. At one time he had 100 yds. out. I even turned the boat around and helped Gail recover some line. Gail did a good job and the gaff put him in the boat! Nice fish--40 inches---28lbs. We continued our drift strategy, but no more takers. Finally the wind started to settle down and we set up on anchor. Chum bag out, and the bait fish started to show. My line goes off and I have a 1/2 in. short cobe on. Gail nets him, back he goes. Sharks started to show up, so we pulled anchor, cleaned up and decided to head in. We had the mackeral around all day, and Gail did put a 26" one in the cooler for some smoked dip(to go along with the smoked cobia belly--I mixed them up last time and it was delicious). Also did take a surprise 18" flounder off the bottom. Over all nice day, but "Ruff".
Forgot the camera, so no on water pics.