tobyhere Posts: 5 Greenhorn
April 2012 in Southeast General Fishing & The Outdoors #1
I've never made a gopro video before, but I got one over the holidays and its a lot of fun! Also, a friend let me borrow his mac to edit, and this is the first time I've ever used one in my life. No fancy transitions or title screens, but I like the way it turned out. Its a bit lengthy at over 8 minutes, but its so hard to delete good footage to shorten it up.

Thursday 3/29
We limited out. Shark Tales may look familiar to a lot of you. I was almost as stoked to drive that boat around as I was to shoot big fish The most noteworthy thing I'd like to say about that day of diving was that my SD card was full before I shot my fish and I took it off of a school of at least 100+ cobes following 1 shark... all 30+ pounders. It was the coolest thing I've ever seen diving. Kyle from fl freedivers said it best, "looked like a gigantic school of mullet swimming up from the bottom." Mike wore the gopro for a long dive through some Crevalle Jacks and it turned out rad!

Friday 3/30
We limited out. Lots of big fish, 4 over 40 lbs, biggest was 46. If you're wondering why travis and jason came up holding that riffe euro together, its because the reel broke on their previous fish.

Sunday 4/1
We limited out. Biggest fish goes to mike with a 55+ pounder. Our scale maxes out at 55lbs and it was maxed out!

We had 2 leatherback sightings, neither turtle holding fish, and neither caught on camera.

The best week of freediving our group of friends has ever had, such a blast! 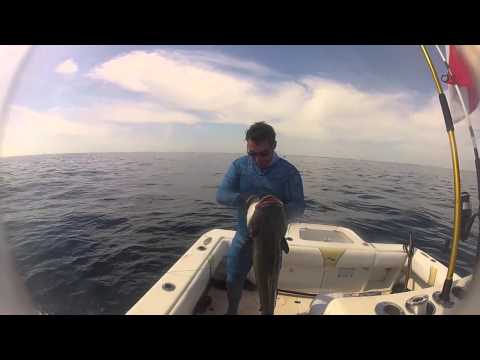