CaptainBly Senior MemberSt. PetersburgPosts: 2,679 Captain
June 2021 in West Central General Fishing & The Outdoors #1
So, I was talking to a buddy of mine a few months ago and asked him about his boat.  He had a Key West 196 Bay Reef that a few years ago he was really using a lot and having a good time on.  His kids got a little older and picked up baseball, karate etc... and the boat stopped getting used.  It was just sitting in the side yard.

So he says I will sell it to you for XYZ.   I am like seriously?  He said yes.  Basically making me buy it.  So I said send me some pictures.  He said it is filthy.  Been sitting in the side yard for 3+ years.  I said no problem, just send them.  So here it is... 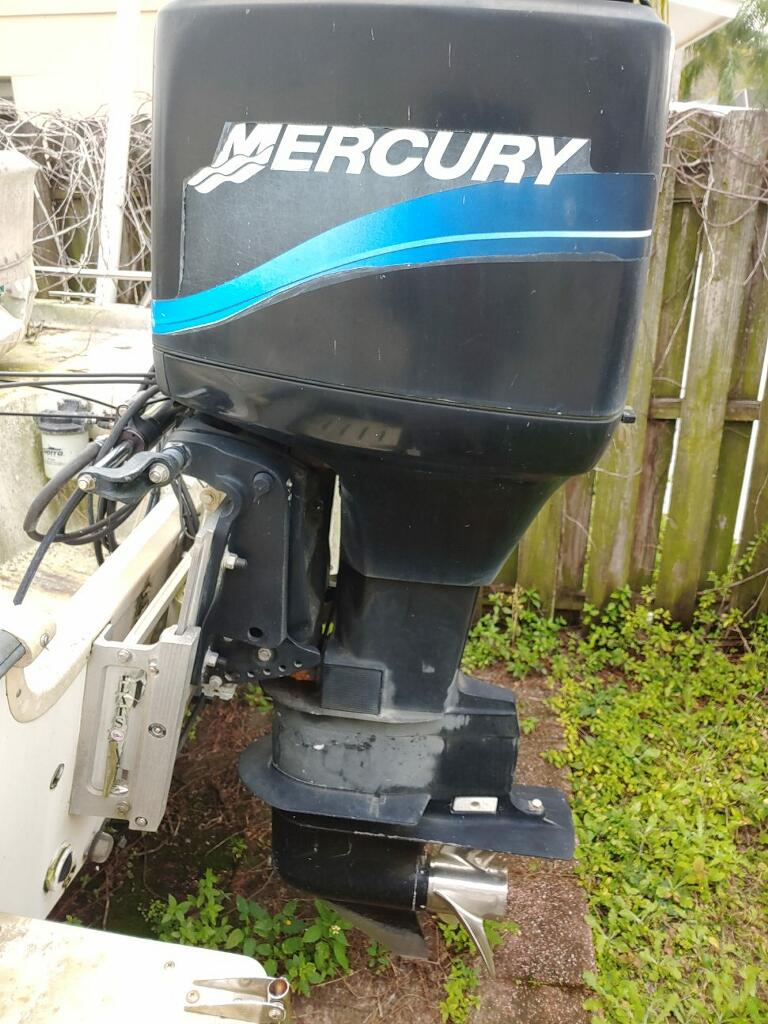 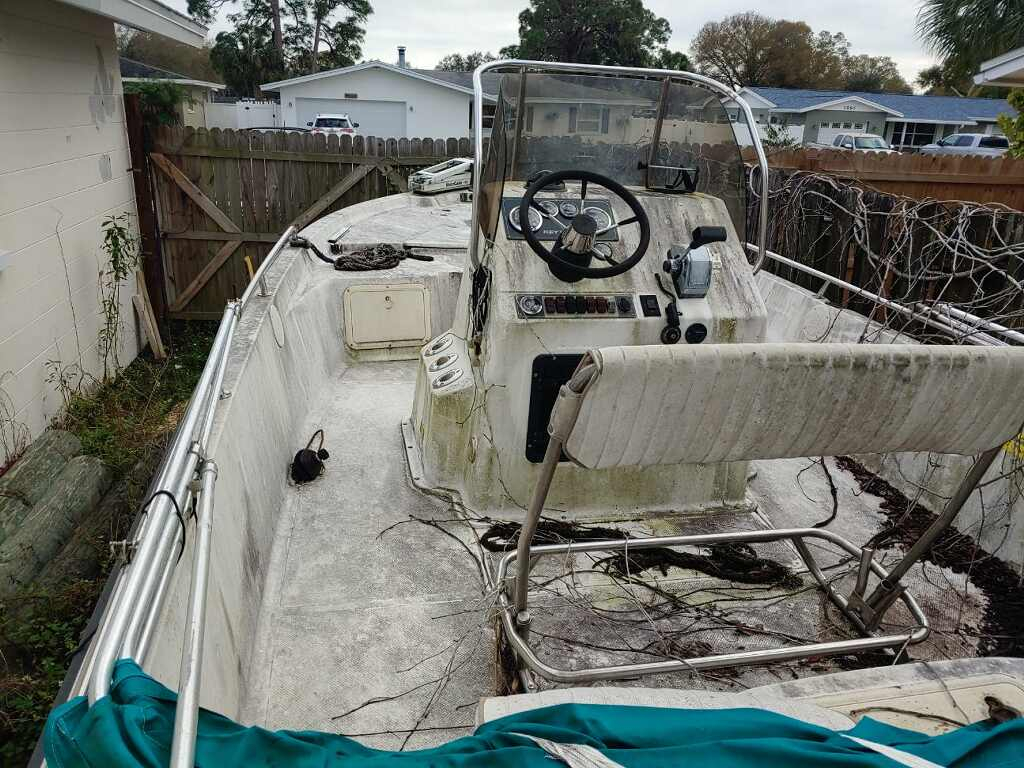 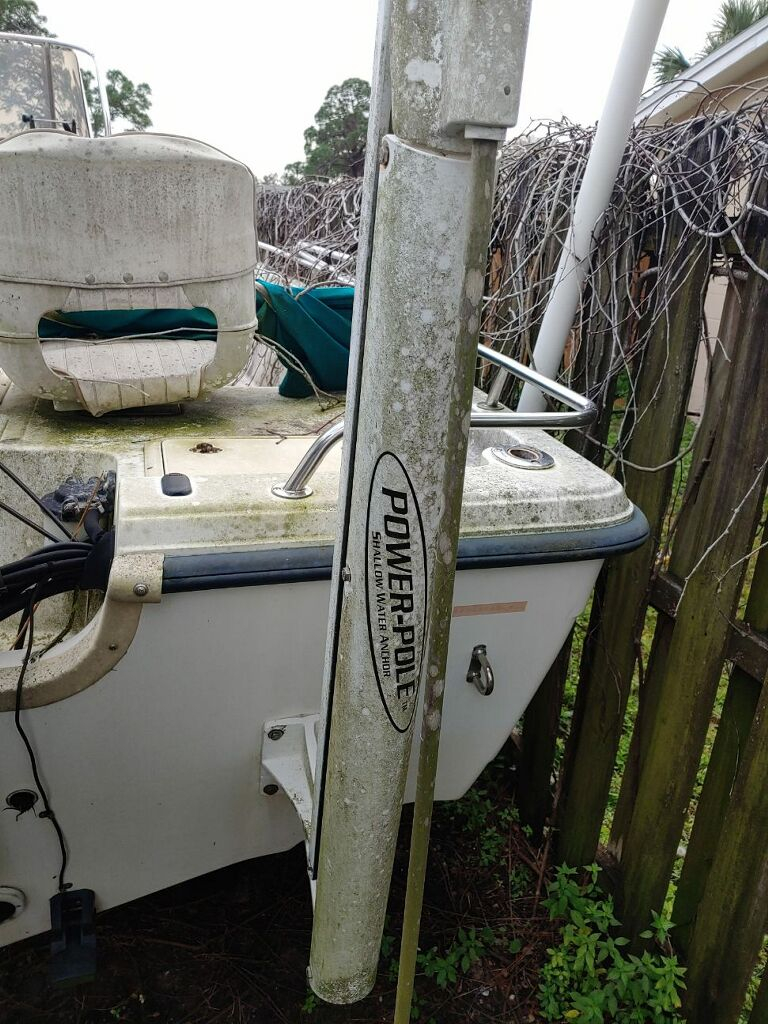 Ok.  LIttle dirt and grime but no worries.  So I start the sell job on my wife to buy this for our son Tyler and I get the NO.  He doesn't need a boat.  He and his girlfriend just bought a house.  They don't need the added expense.  But honey, I will get it in shape and it is a great starter boat.

She was unflappable.  So I started asking some other folks about buying it.  My brother just bought a house in Port Charlotte and it would be a great little boat for beebopping around there. Nope, didn't want it.  My buddy Kiel used to have a 17' key west and loved it.  He wanted it but had no real way to come get it.  My buddy Jeff was immediately in and wanted it but I wanted to hold him off and see if I could talk the wifey into it.   So I worked and worked and worked. Every week or two just mention it.  She finally say NO.  Not doing it.  So we are at a nice dinner at Gratzi in downtown st. pete and I text Jeff and say it is all yours, here is the guy's # and she goes, why don't we buy it for Tyler.  God I love chick logic.

So after I text Jeff that he can take it, I text again 2 minutes later and say sorry Jeff, wifey gave me the go ahead so I am buying it.

So, I get it one weekend and get the pressure washer out. 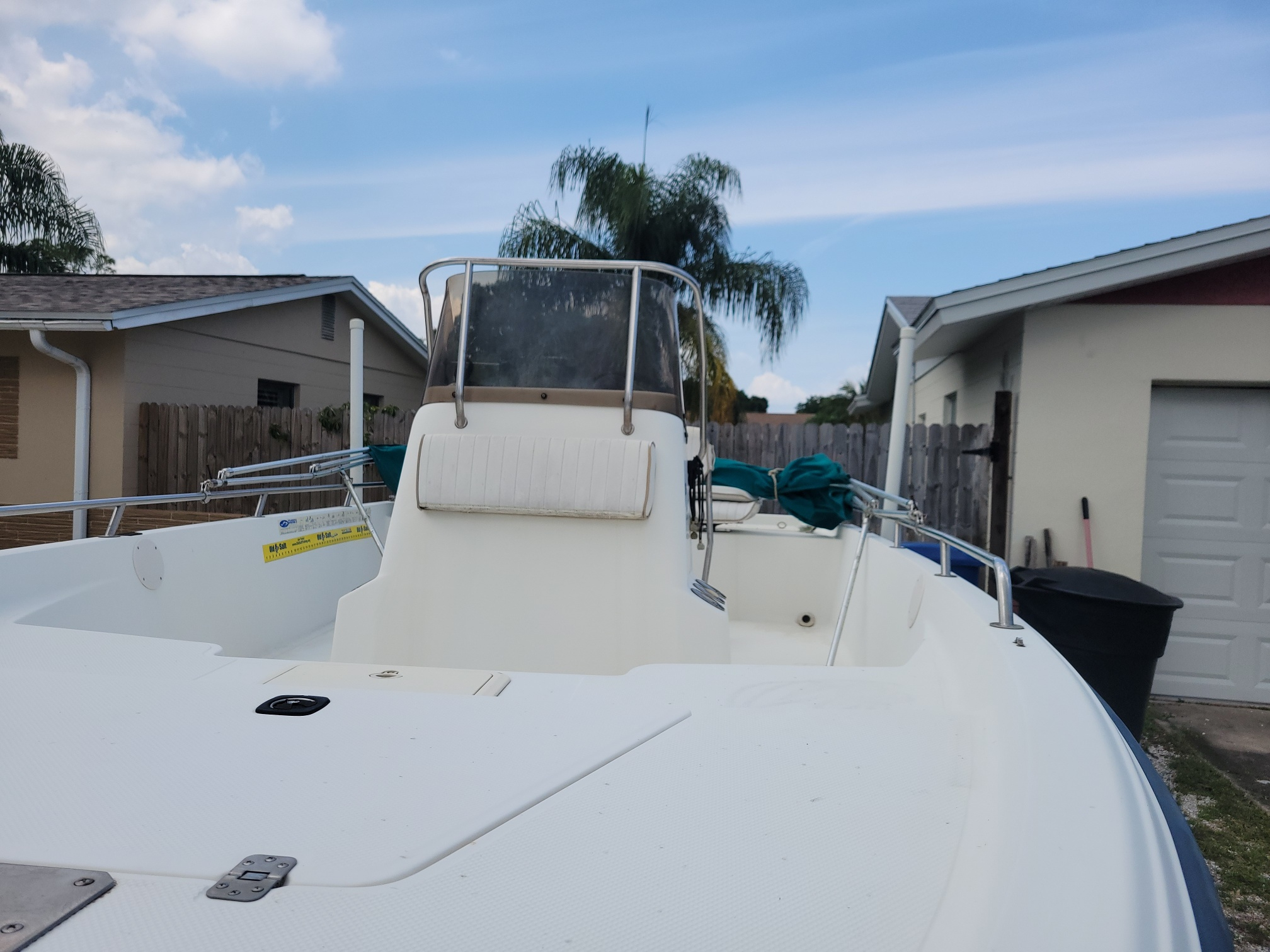 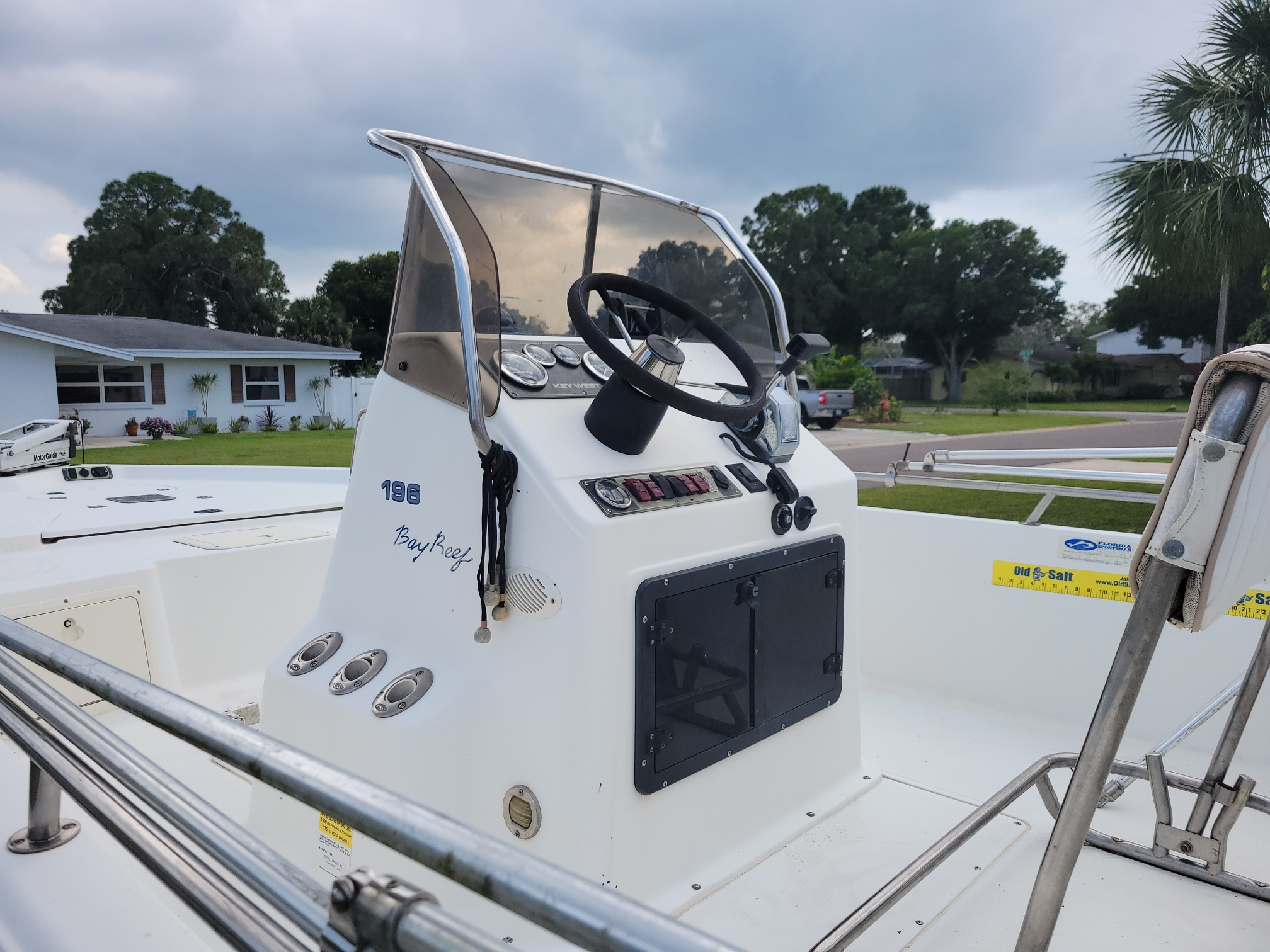 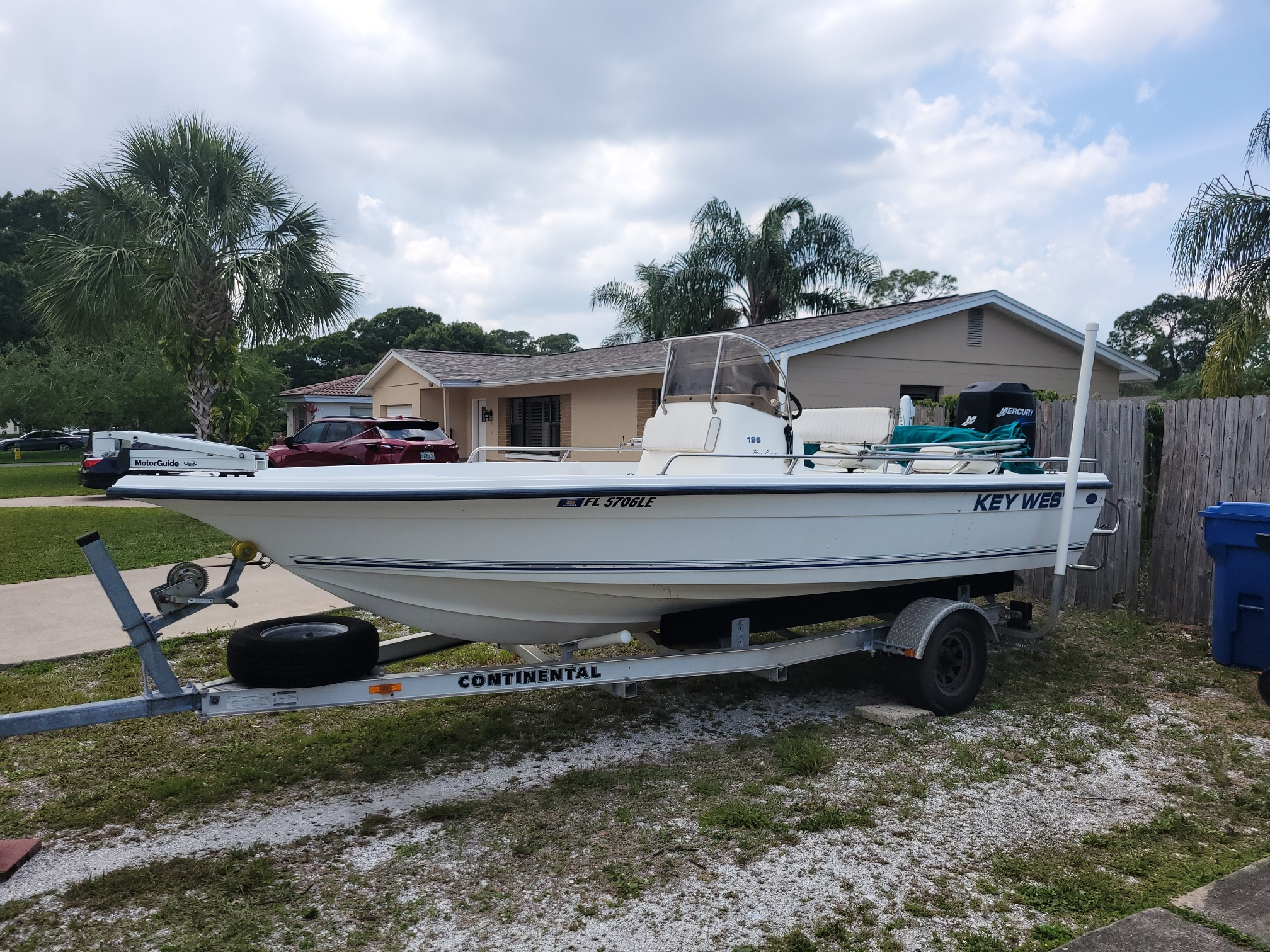 Little better.  Got my buddy/mechanic Mike over to check the motor and great compression all is good.  Got the trailer springs replaced and start setting up this surprise for Tyler.

I emptied the tank of old gas.  Put some new in there.  Mike has gone through everything and it is running great on the hose.  Done the foot oil, new water pump, spark plugs etc...normal service to get it in shape.  Well we are finally all ready for the final test splash.  So my wife and I put it in and take a little test drive.  It sounds great at idle, we run a bit, come off plane and it bogs down so we return to the dock and put it back on the trailer.

Evidently when I emptied the tanks, I didn't have it tilted up enough so there was som water in there but it was toward the front, when we put it in the water it all went to the back and wala.  Fortunately I didn't blow up the motor.  Got that all straightened out, and she fires up and runs great.  So it is finally time to give it to Tyler.  Hoping through this whole thing, he didn't know about it since by this point everyone else did.  My neighbors were asking if he got it yet, my buddies, his boss who is a buddy of mine.  Everyone knew but him.

So how do we do this.  The master plan was to have my wife follow me in my boat and we will park it at bunces sand bar and go back and pick up Tyler and his girlfriend and hang out on the sand bar for a while.  It was also Tyler's birthday and father's day so we had all the reasons in the world to get together.  The guys we dropped the boat next to and left were looking at us like we were crazy but oh well.

So we head back to the dock and arrange to pick up Tyler and his girlfriend.  We run back out to the sandbar and TRY and park a few boats down.  WOW did I look like a rookie.  I totally underestimated the tide.  We threw the front anchor and I was backing in I thought I would jump in and put the back anchor down.  Bad Idea.  Tide was WAY WAY WAY to strong and I am on the beach leaving my wife and son and his girlfriend on the boat.  But they got it under control.  I look like a moron.  I get back on the boat and promptly move about 6 boats away and repark.

Little back story.  A buddy of Tyler's and Tyler got a free 10' john boat on craigs list and they bought an old evinrude 6 horsepower motor.  It is sitting in Tyler's car port.  He has been taking it out in lake seminole and stuff.  His girlfriend said he sits in this little POS every night on his first boat.

So, we are sitting there.  Have some lunch.  Pull out some gifts.  My wife gave him a nice outfit.  Hat, swim shorts, nice shirt.  Then I gave him my gift.  We bought a cheap captains outfit on amazon.  Hat, pipe, glasses, anchor necklace.  I gave him some shtick about how his girlfriend told us he sits in his row boat every night so I wanted him to have a nice outfit to look official.  He just rolls with the old mans f'd up sense of humor. 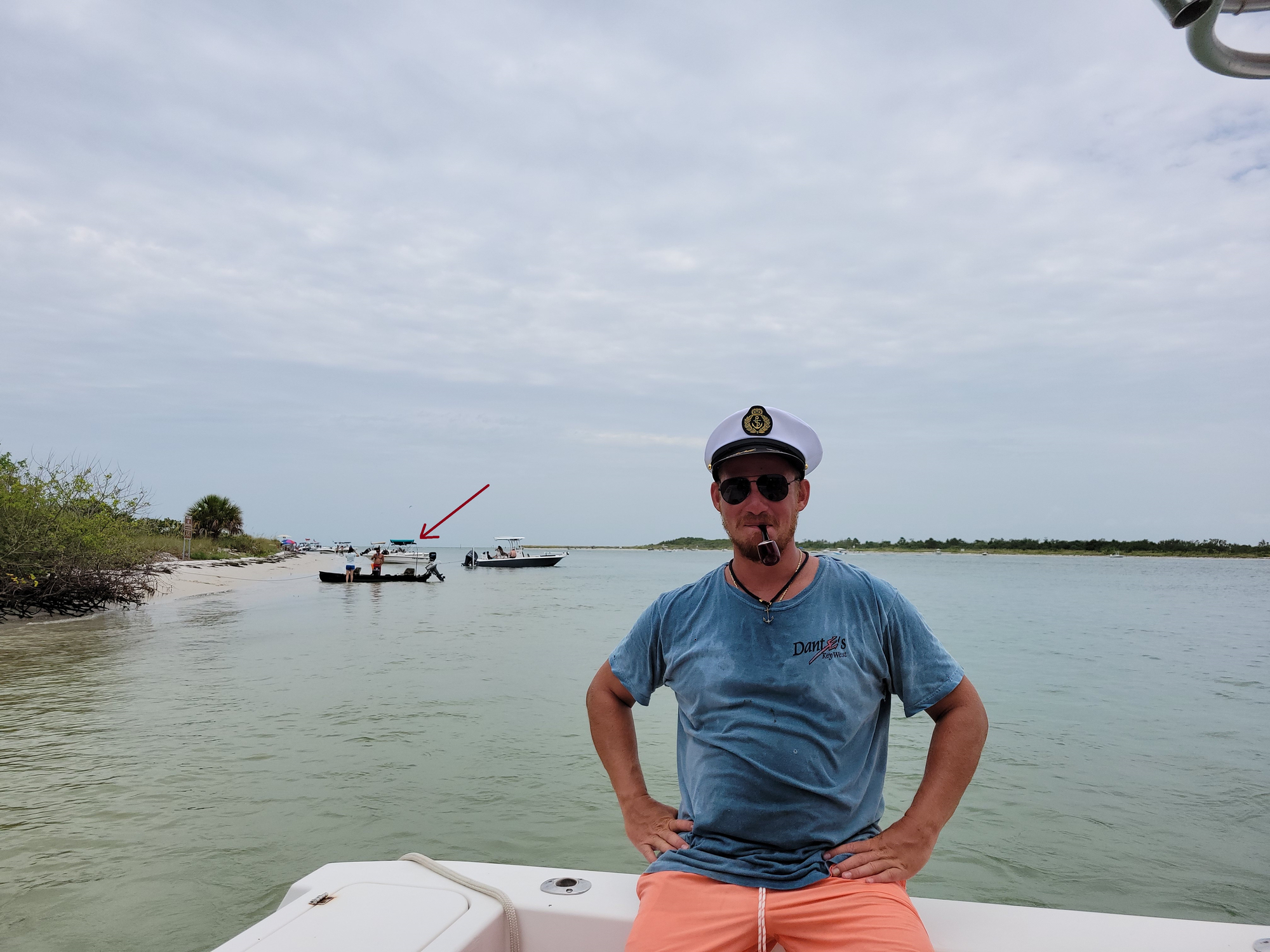 So, he models his new outfit, not realizing his new boat is a couple boats down right behind him.

So, I give him a tackle bag and in the tackle bag is a stem for a live well, a fire extinguisher, a handheld vhf, flares, basically all the safety gear he needs for his boat.  He is like this is great but I don't have a live well in the boat.  I say look over your shoulder.  You see that Key West down there.  That is your new boat and toss him the keys.

So I walk down with him and we fire it up and he takes his new boat out for the first time. 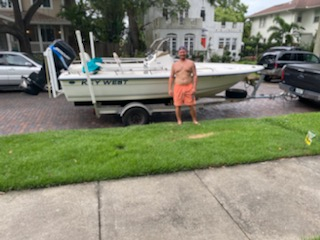 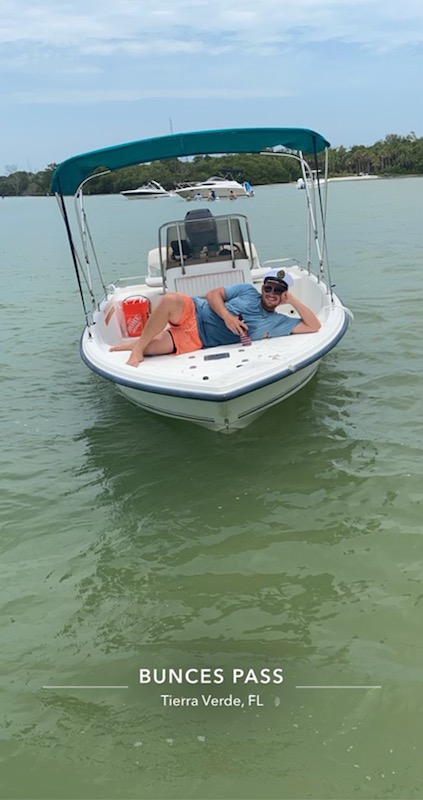 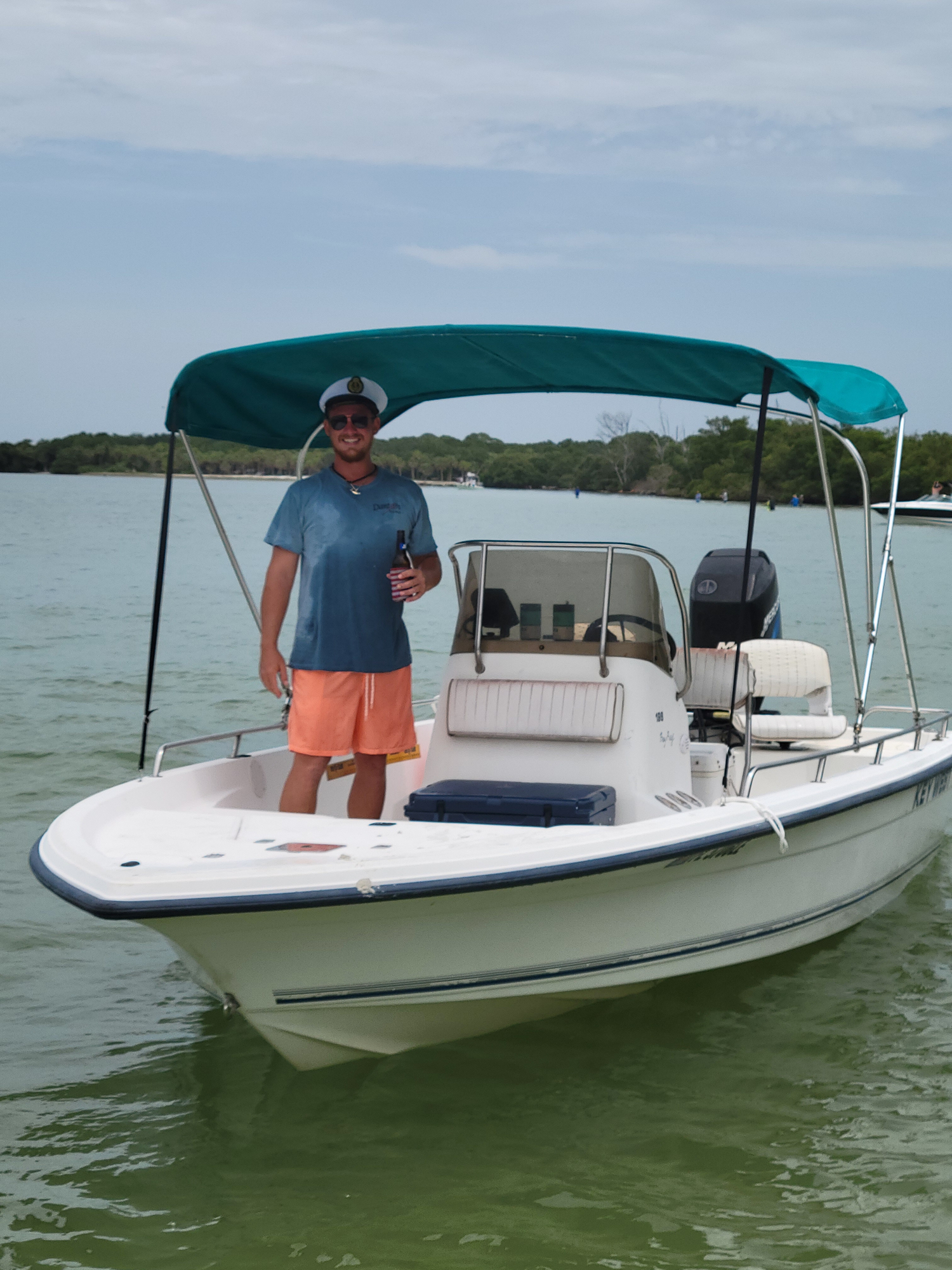 Welcome to the game Tyler.  Hope she treats you well...