gogittum Nature CoastPosts: 3,679 Captain
June 2021 in Boating #1
We went thru this a while back and I almost hesitate to get back into it.  I walked away from this thing and focused on the "new" 16 ft Starcraft, but would like to get the thing sold, so finally got back after it.

I "thought" after all the previous effort that I had it pretty well sorted, so a few days ago I put it back into the canal to go for a test run.  Silly me.

Previously, I pulled the carb and disassembled it, then soaked it overnight in carb cleaner. Used soft copper wire to clean the jets, etc., blew it out with compressed air, set float level and re-installed it.

Still needed ether to get it going the next day, but once started then shut off, it would re-start easily. It doesn't pour gas when tilted anymore.

I put the boat into a local canal, started it and moved out into the channel, then hit the gas. The motor took off strong and smooth and the boat came quickly onto plane - for 100 yards, then the motor quit. It seemed to me later with motor on the muff that a piece of grit must've gotten into a jet, so tore it apart and went thru it again, but this time put a big fuel filter on it.

Now, I did get it started when cold one time with choke and no ether. Put it in canal yesterday and it idled fine, but popping now and then. When I hit the gas, it started to go, then sputtered - more like cutting out - then go again, then cut out....kept me about 1/2 way on plane. rrrrrr-p-p-p-rrrrrr-p-p-p, etc. After a bit it suddenly cleared its' throat and took off. WOW. I screamed down that canal on full, flat plane at about 20 mph - for about 200 yards, then it started cutting out again. It did get me back to the launch, but it was a bit tense.

I had also put in a fuel pump kit and noted the inline filter on pump output. It seemed clean and fine.

When I got it home, I checked spark plugs, spark plug wires, the wires coming from under flywheel and all seem tight and secure, tho' the insulators on the flywheel wires are torn up where they plug onto the coils. Spark plugs look new. Started it on the muff and it seems to run "fairly" well, but idle mixture screw has very little effect, so I suspect an air leak, but used a thin layer of permatex on carb gaskets and all is clean, tight, sealed and new. I deeply hope it isn't a crankshaft seal. In spite of that, it does idle fine.....with some popping.

It still pops at idle and cuts out at higher rpm - air leak shouldn't cause that. I took a short video of it - 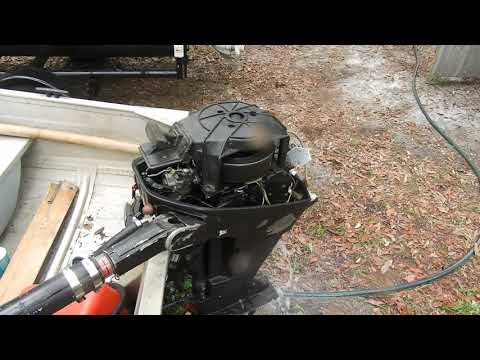 I squeezed the bulb to see if it made any difference.  Hard when started, it was softer soon after, but squeezing had little effect - maybe made it a bit worse, as near the end of the video.  Gas is fresh.

I'm a better than fair mechanic, but 2 strokes are mostly outside of my experience area. Can anyone give me an insight of what to look for on this thing ?? I'm about to tear my hair out.