Randy Richter Posts: 76 Deckhand
April 2021 in Fly Fishing #1
Really counted down the days on this one. Plan was to fish three days with Chris Trosset, son of Robert Trosset, who is pretty much the godfather of guides in Key West. We would be spending mornings running out 50-60 miles to the shrimp boats and looking for giant blackfin tuna. Then afternoons, on the wrecks, with amberjacks, cobia, and permit as the target. While everything didn't go according to plan, (it never does) it was a wonderful trip.
Day One: Chris, our guide, had a new boat ordered, and it didnt show up, so he sent us out with his dad instead. His father has been guiding in Key West for 46 years, and took us out in a 39 foot Yellowfin that was like a spaceship. At the very first shrimp boat we pulled up to, blackfin showed up almost immediately. The key was to pick the blackfin out from the roiling masses of false albacore, and in this case, the answer was a 4/0, eight inch, bright orange deceiver. Turns out albies don't much like the color orange. There were four of us, and we did battle with numerous blackfins as went from shrimp boat to shrimp boat. Only one fish was under 20 pounds, and I was lucky enough to land a 27 pound blackfin on my ten. Would have liked to be using a twelve, but it earlier met it's death when a fish went through the motors, and my path around the boat was blocked by someone (one of the downsides of 4 anglers) After plenty of big blackfins, we moved to the wrecks. Judicious use of chum brought clouds of greater amberjacks up to the surface. After catching a few on streamers, I started fishing them with a popper, and they were crushing it. Most of the AJ's were running about twenty pounds, and I was honestly grateful they weren't giants. A few jack crevalles and alamco jacks were mixed in. A wonderful day and everyone had sore muscles at the end.
Day Two: Different captain, different boat, mostly the same program. Chris was back with a borrowed boat. Ran out to the tuna boats, but this time, all we could find was false albacore. At noon, I had the only blackfin. But we kept moving from boat to boat, and on the eight boat, we hit the tuna jackpot. At one point, we had quadruple header of blackfins. You would land one, and as soon as the fly hit the water, you had another. Eventually, we headed off to the wrecks. Couldn't find the permit, and even the AJ's weren't showing up. Did have an experience I will never forget though. Had a tiger shark show up, and since I'm a shark fanatic and have never even one in 25 years of saltwater fishing, we chummed it to the boat, where it was joined by another tiger. A tiger on fly is a dream of mine, and although they both weighed 500 plus, (not ideal size), I pulled out the 18 weight and gave it a whirl. Didn't happen, and they both drifted away. Then, just a minute later, a lit up hammerhead of perfect fly size (150 pounds) charged the boat. First cast, it garbaged the fly. I've always wanted a hammer on fly, and was so worried that either I would lose it, or one of the tigers would come back and eat it! Neither happened, and after about 40 minutes, had it laid up alongside the boat. A fishing friend of mine says I have a shark fetish, but don't care, I was pretty stoked.
Day three was kind of a bust, big wind and seas, a smaller borrowed boat, and just could never really get on the fish. A few nice cudas, and some yellowtail snapper. I will take two good days and a slow day on a destination trip anytime. Forgot to mention, bonus, the hotel we stayed at had a lighted dock, the juvie tarpon came in every night popping shrimp, jumped one each night before i went to bed.
Day four, left the Keys, and did a little DIY in Miami and north. Peacocks, snakeheads, and cichlids. The snakeheads were the main target for me. Landed a bunch of fish, landed eight different species, midas cichids, mayan cichlids, peacock bass, spotted tilapia, blue tilapia, largemouth bass, bluegills, and shellcrackers. Got lots of shots at snakeheads, but they water was low and they were unbelievably spooky. The blue tilapia was the first I had ever been able to feed, so was happy about that.
Making this one an annual trip for sure. Next year, tiger shark on fly. 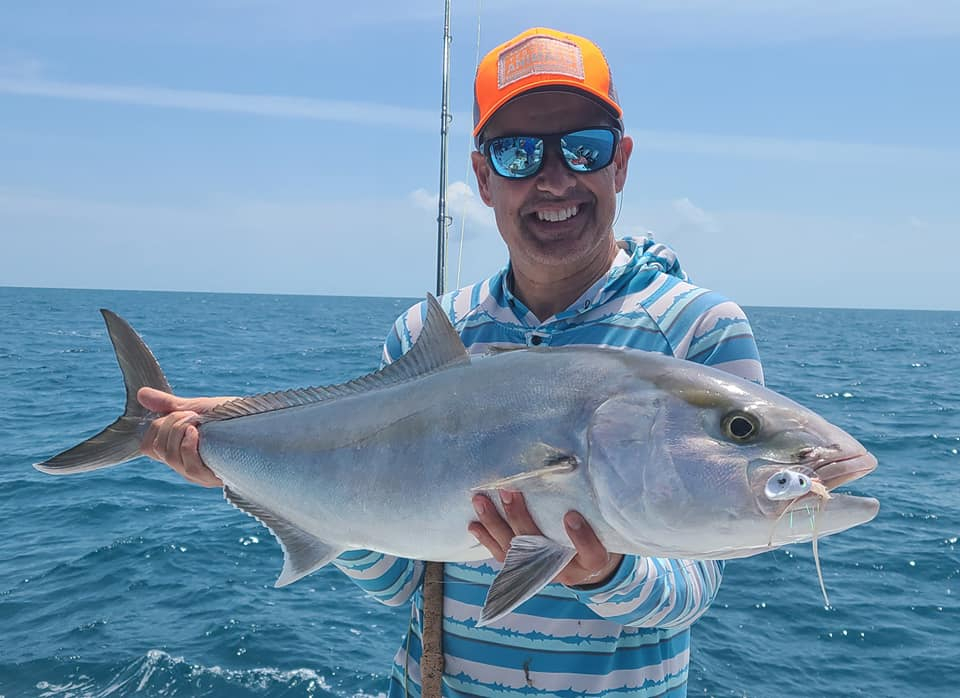 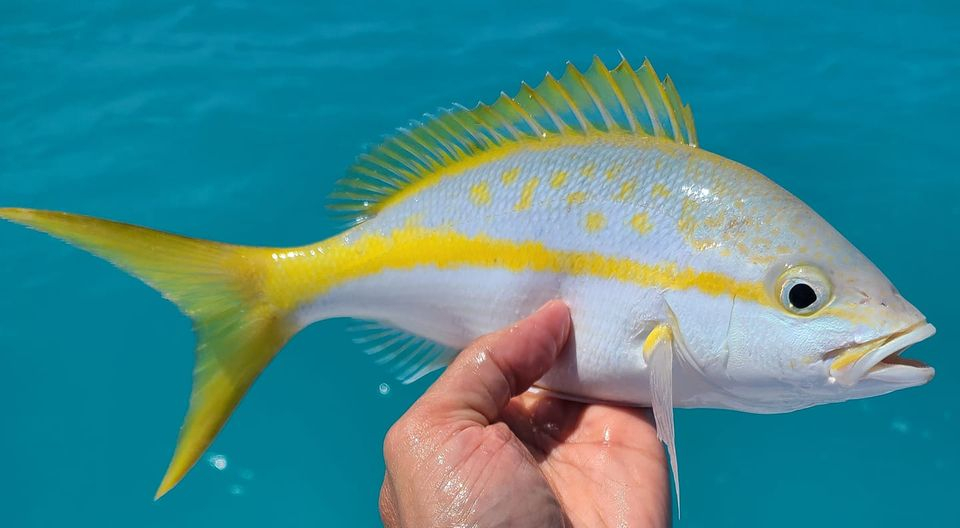 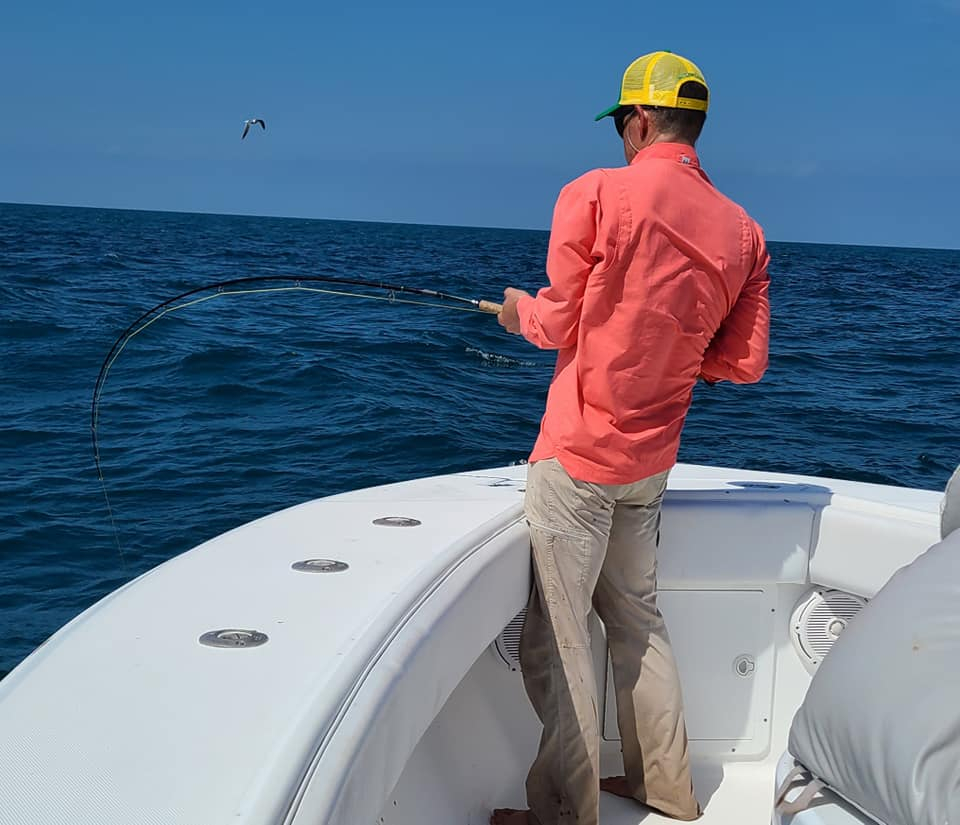 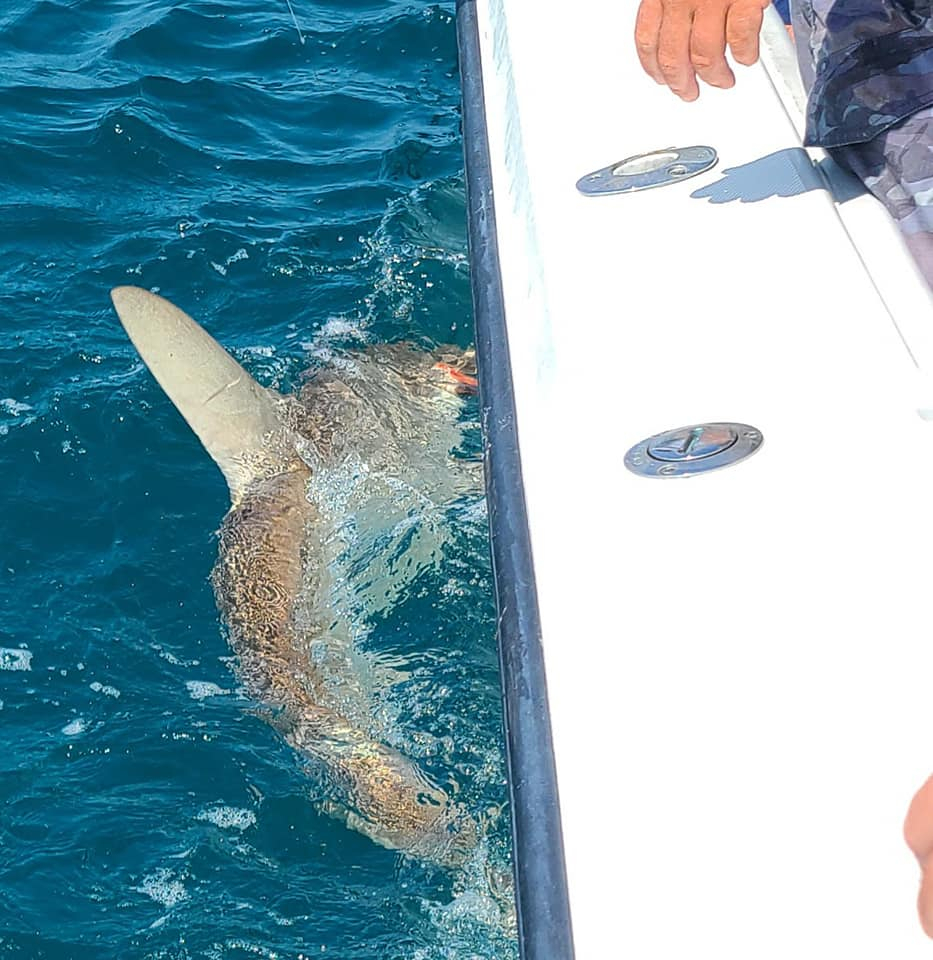 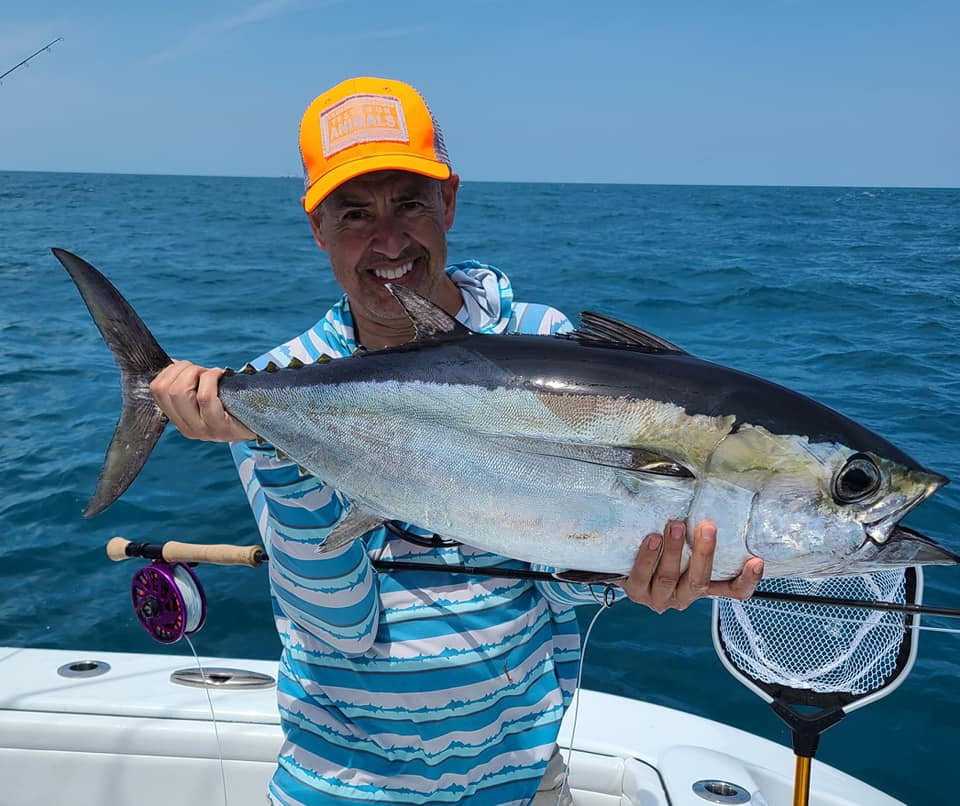 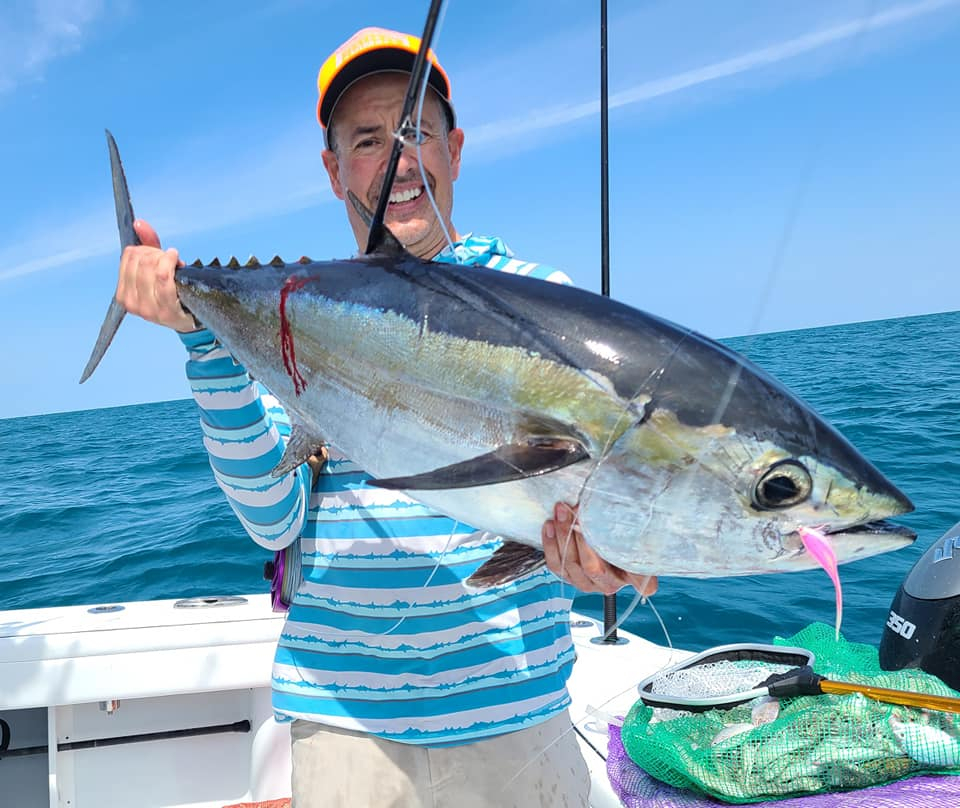 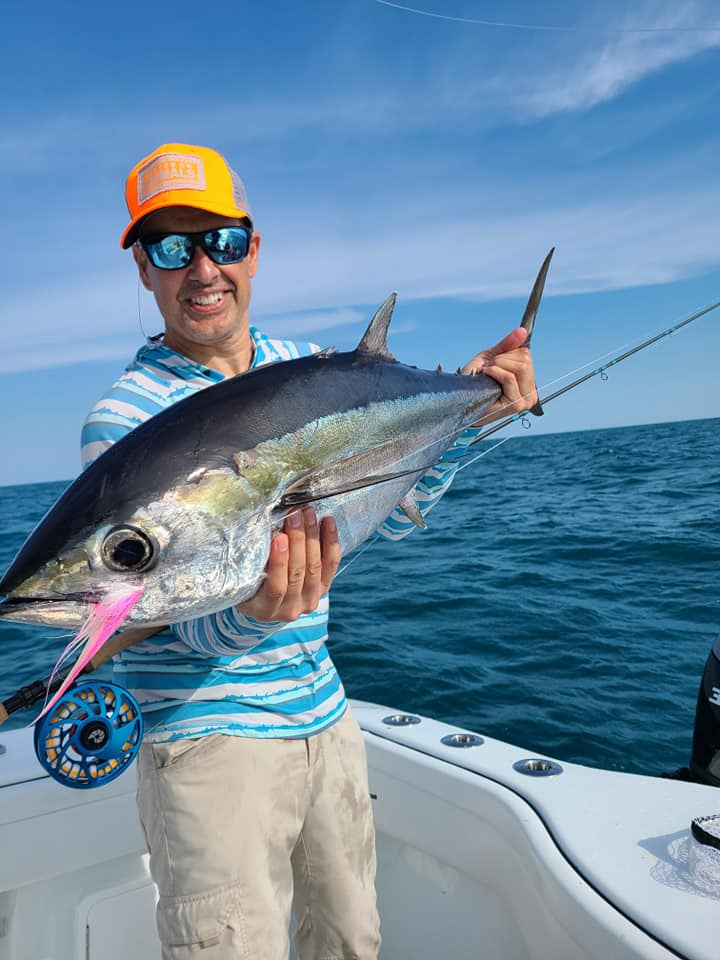 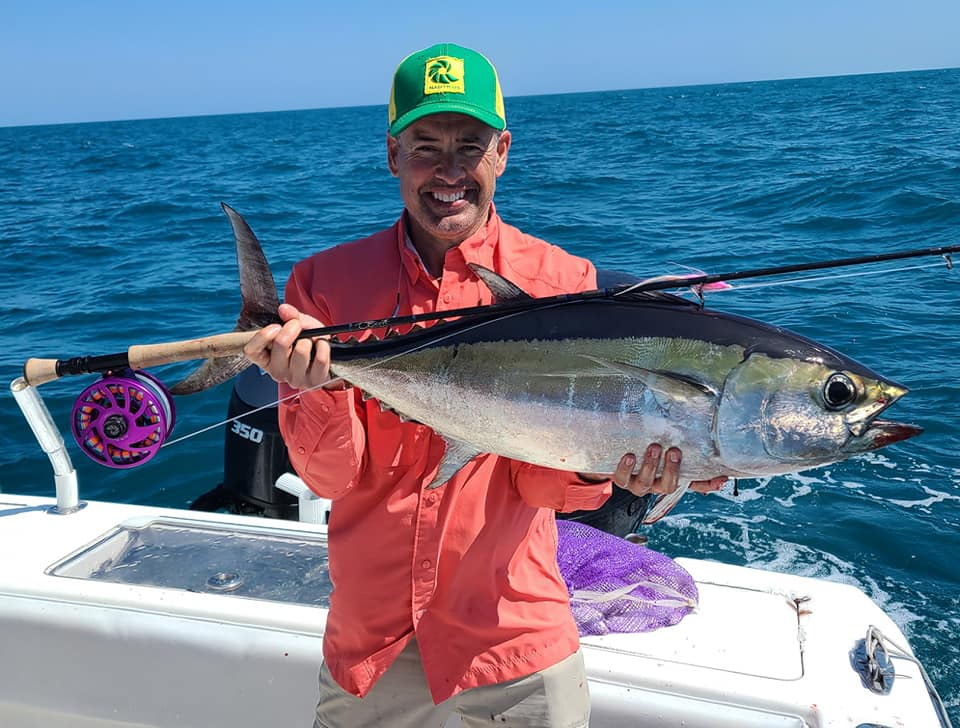 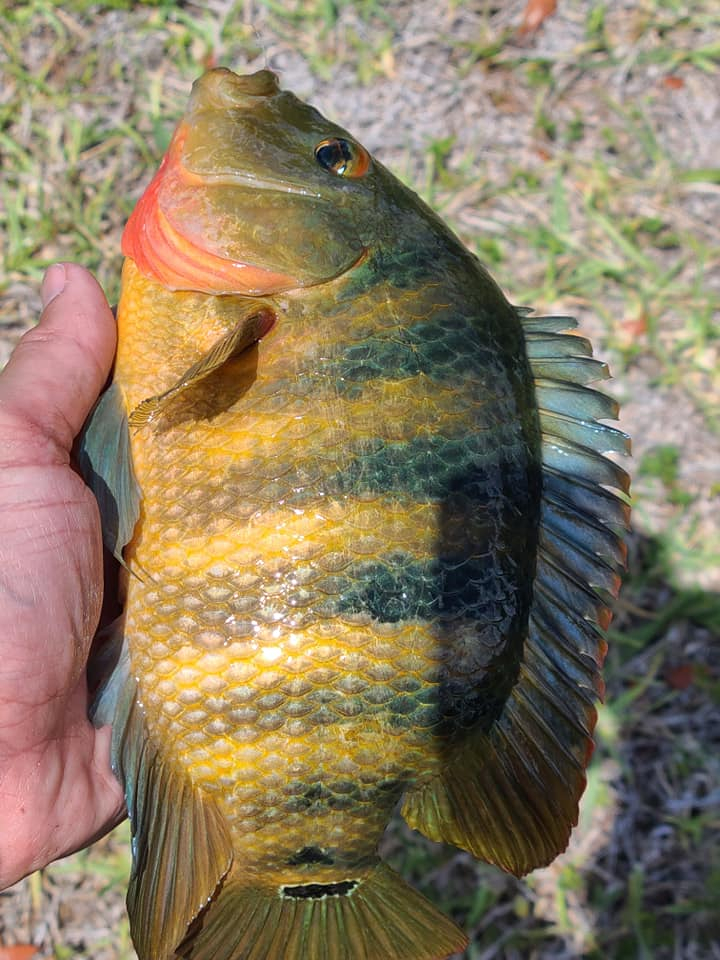 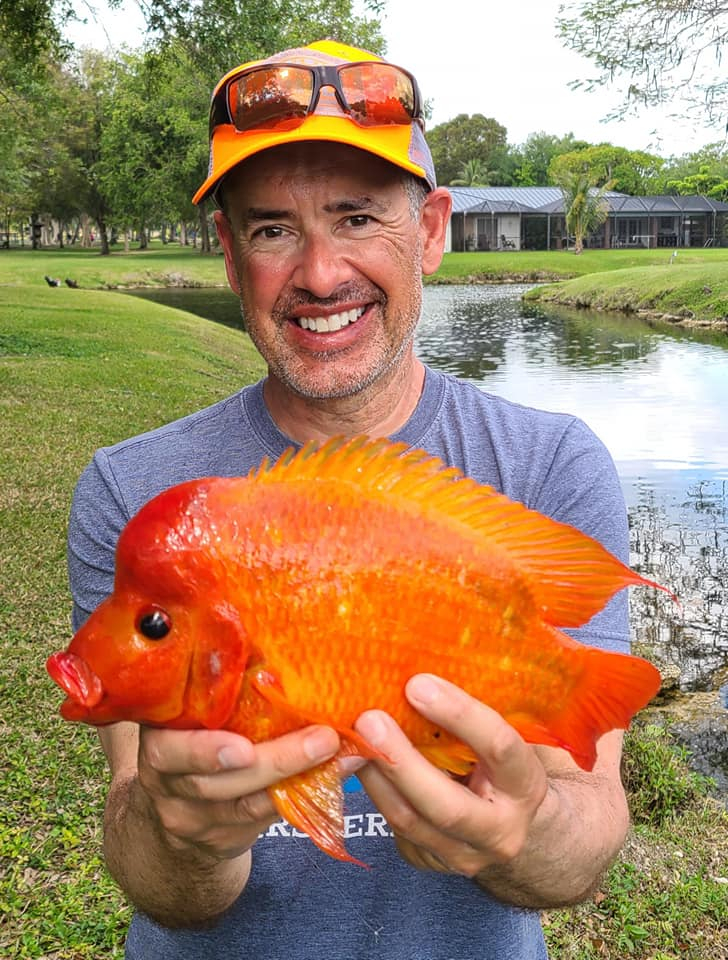 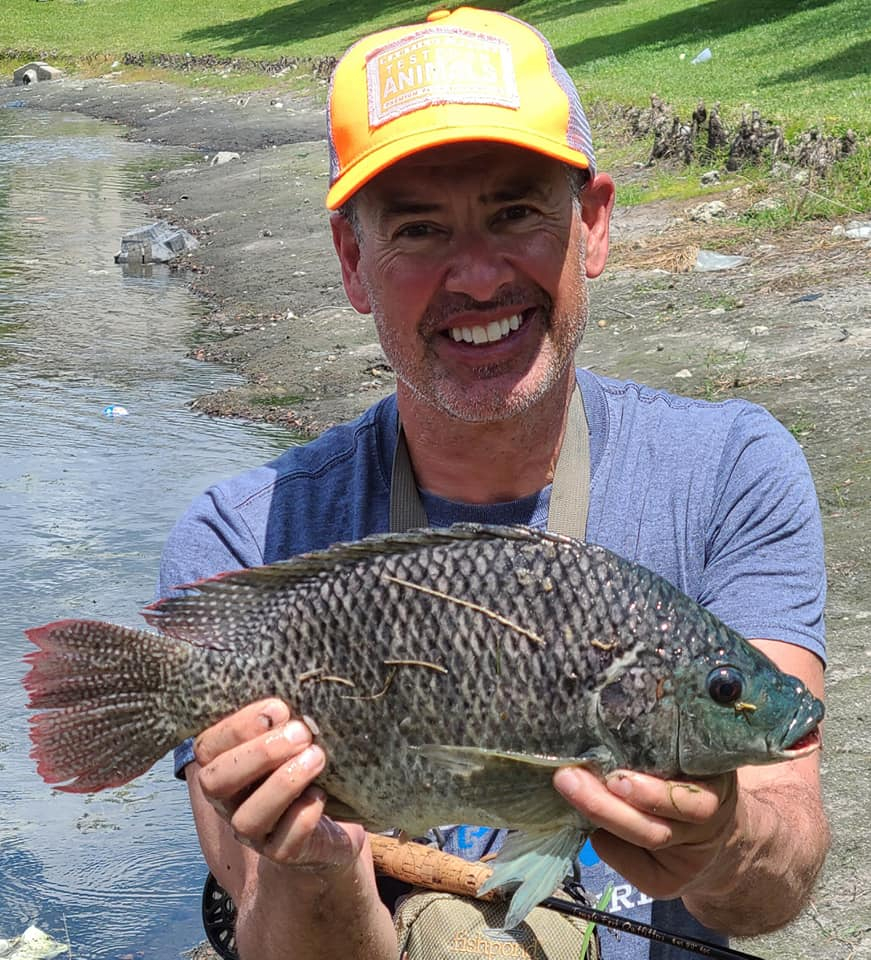 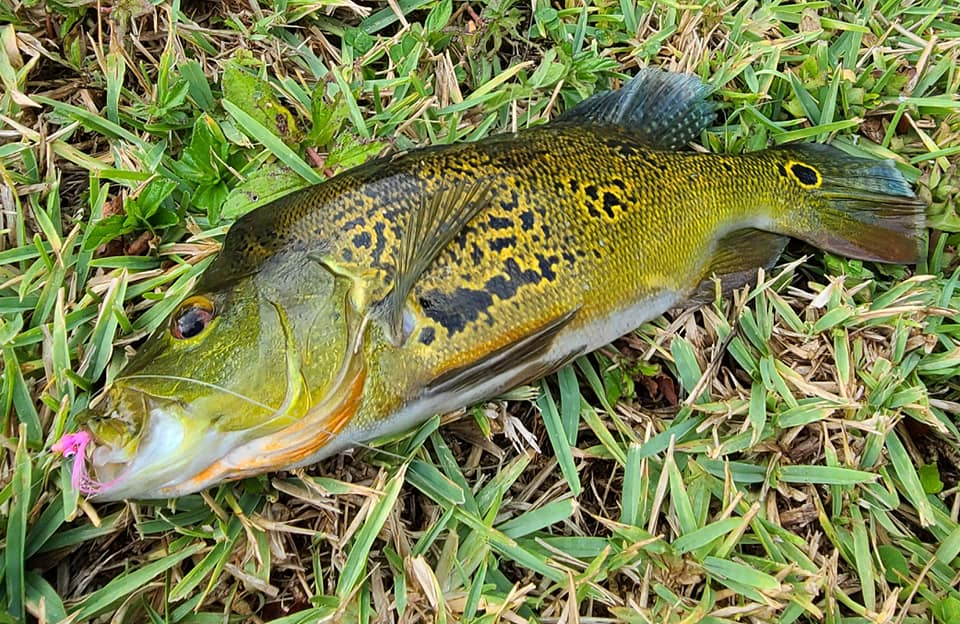