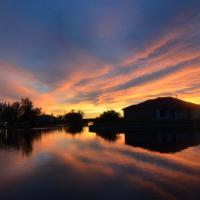 RockyTop Posts: 147 Deckhand
June 2020 in Southwest General Fishing & The Outdoors #1
I went to the Pineland area early last Saturday morning and the water was just nasty. Murky as heck with visibility of a few inches at best and dead grass floating everywhere with very little bait and zero predators around.  Water clarity was fine on the north end of the sound with plenty of bait around though.  So what causes these localized areas of super cloudy (brown) water? This is the third time I've encountered this in the same area over the last couple of years...a friend was with me the last time it happened (sometime 2019) and his comment was that the shrimp boats must have been working the area the night before.  I don't know that he was right or not but it kind of makes sense.  Is that what I encountered again this past Saturday? The effects of shrimp (bait shop type) boats working the area the night before? If so is there any rhyme or reason as to when they work this area?  If the funky water wasn't from shrimp boats working the area what was the cause?