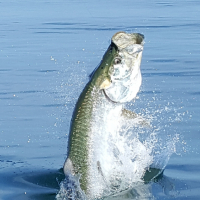 permit_me Posts: 1,177 Officer
May 2020 in West Central General Fishing & The Outdoors #1
Its that time of year again. Although we hit the water at 6 we saw lots of boats were heading out, earlier than usual. We got to our spot about 6:20. first cast, fish on and jumpin! by 630 three boats had come in on that school. One other boat was headed there same time as us and they just drifted, as we did, too. I looked over and they were on. Got the fish to boat in fifteen minutes. Set back up close to beach, and in a minute or so, had a guy, solo, motor between me and beach, where fish were and pulled between and the other boat that had hooked up. HE kills motor. a few minutes later he motors down onto the next batch of boats working fish...two more boats rolled in within five minutes. By seven the place was nuts and we had to leave. Next spot, no one in sight. no fish in sight. guy blows between me and beach and sets up a hundred yds to the south, the direction fish are coming from.  Had to move. next spot too many boats, had to move... fish seemed to go deeper and deeper. A solid bite, shut down by over zealous anglers.

As tarpon season gets underway, we are experiencing huge numbers of anglers on the water recently. While many display some or lots of etiquette many do not even understand that they are interfering with an angling process that requires a lot of work.  Motoring in between two boats hooking up will not get you a fish (or any new friends). The fish will go away. You are better off just drifting or anchoring and much more likely to hook a fish.

Take some time and read up some more on tarpon fishing etiquette and tarpon behavior. Trent posted this a couple years back. (he's a well of info if you pay attention, or can use the search button)
https://forums.floridasportsman.com/discussion/248052/tarpon-behavior-patterns-and-reading-fish