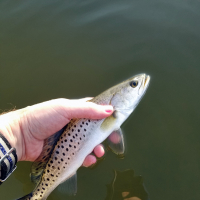 NEKHULZ Titusville, FL.Posts: 24 Deckhand
March 2020 edited March 2020 in General Fishing #1
Hello, my dad and I just got back into wade fishing the Indian River Lagoon out here in titusville.  My uncle used to be guide in the area and gave us an older Shimano stradic and an older Shimano sustain, there are all probably 15/20 years old, the handle on the stradic is starting to stick really bad when trying to retrieve and I was wondering if there might be a fix for this or if yall might have some decent budget options for a new reel, $50~100