John McKroid Posts: 3,588 Captain
March 2020 in General Paddle Craft #1
After more than three months without wetting a line, the weather looked too good to miss out.  I launched Sth of Pompano Beach pier two hours prior to sunrise in hopes of filling-up the bait well with live goggle eyes.  Unfortunately, the bait was scarce -- only one goggle-eye has taken along the beach.  Luckily, the runners bit well, and I was able to plug the well and deploy 2 baits just after sunrise.  Within 10 minutes of trolling, I was rewarded with a double hook-up of Barracudas.  The slimy Cudas are not ideal table fare - CPR(catch photo release). 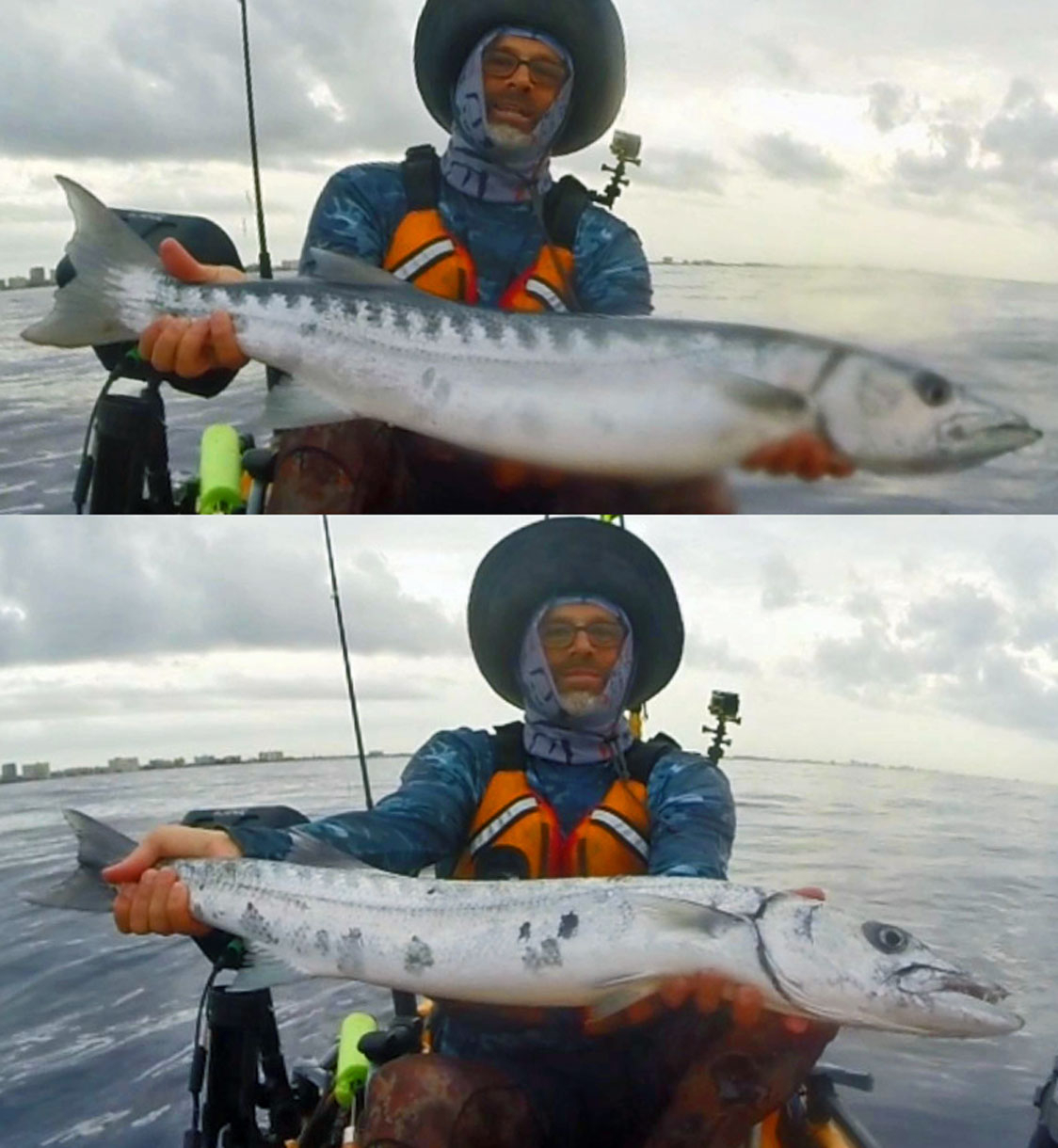 After the Cudas, it slowed down.  I worked my way out to 300ft vertical jigging along the way as I slow trolled two live bait rods.  There had been reports of Blackfin Tuna and I was hoping to bring home some sushi.  By noon I had worked half a dozen spots from 180-300ft of water for almost nothing.  Frequently I can at least catch some Almaco Jacks off the wrecks, but there just was not even much of anything to meter on the fishfinder.  I had high hopes of a snapper when my rod bent over hard with a heavy fish while bouncing a jig off the bottom in 240ft of water.  Instead up came a side snagged Barracuda. 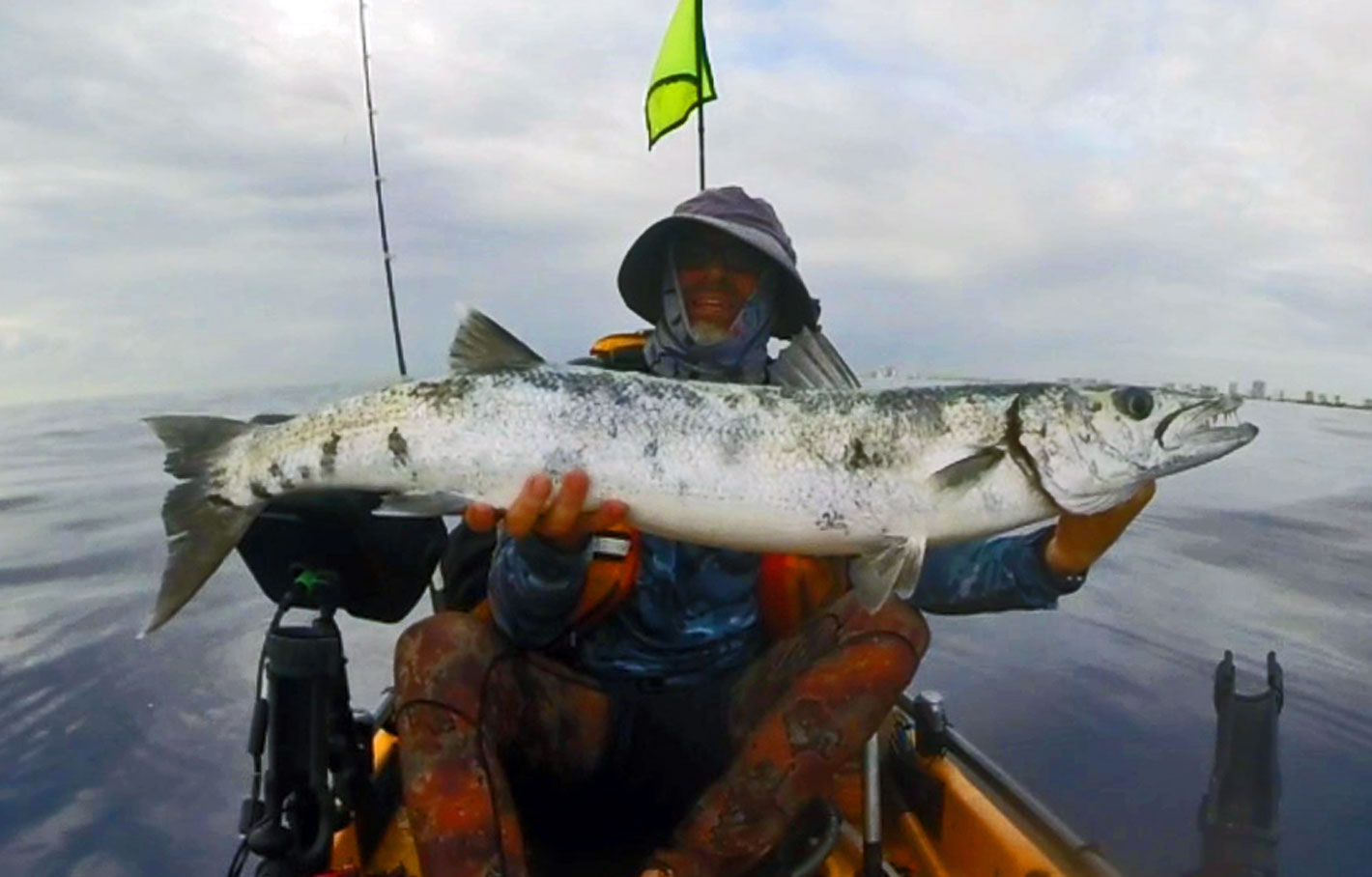 Later, I snagged a nice Porgie which was the first fish I decided to keep. 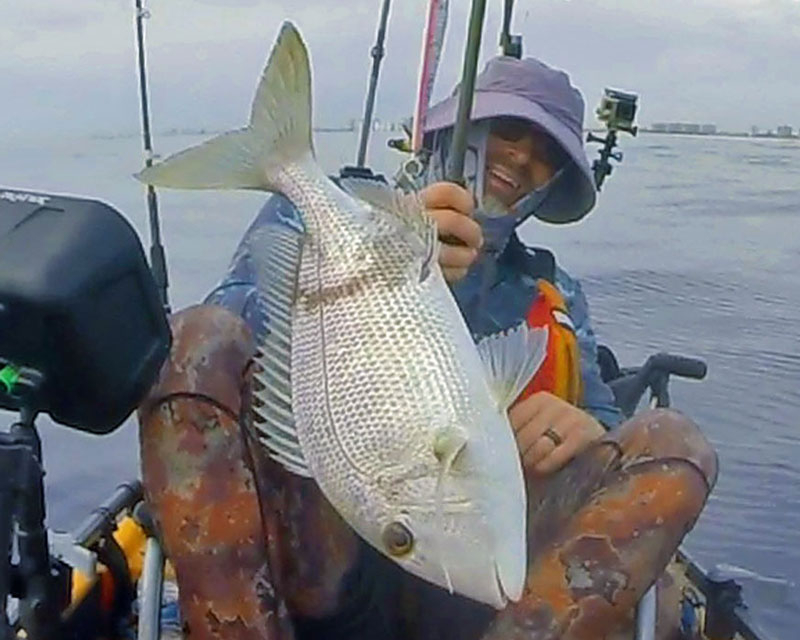 After that, I did a long peddle trolling to another area in search of better action.  The weather was beautiful and the drift was a very manageable half knot to the South.  Around 2 pm in the afternoon, a live speedo produced another Barracuda. 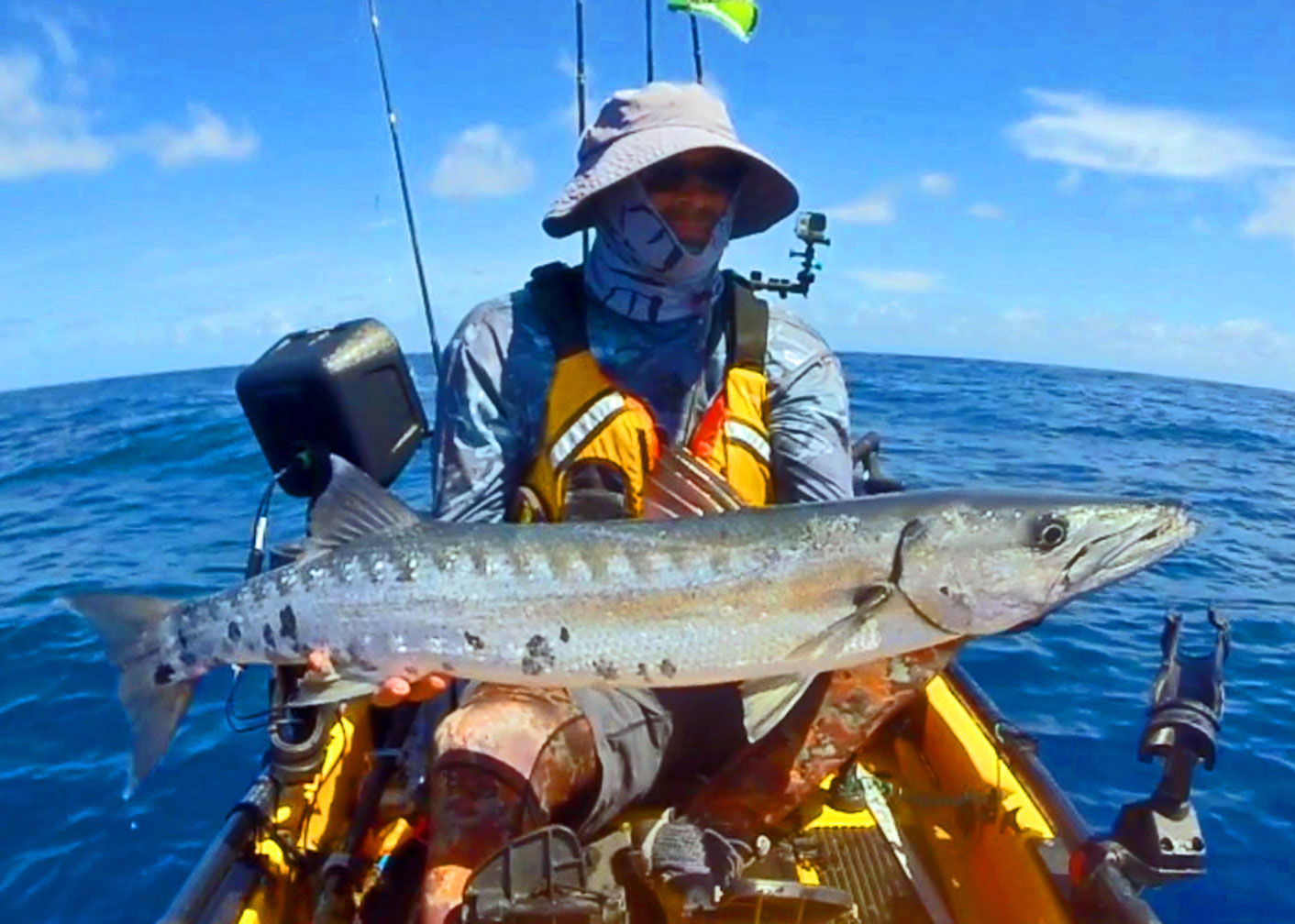 About an hour later, I found a wreck with promising activity around it -- lots of bait, and some bigger targets below the bait.  The first drop of a vertical jig produced a surprise yellowtail snapper. 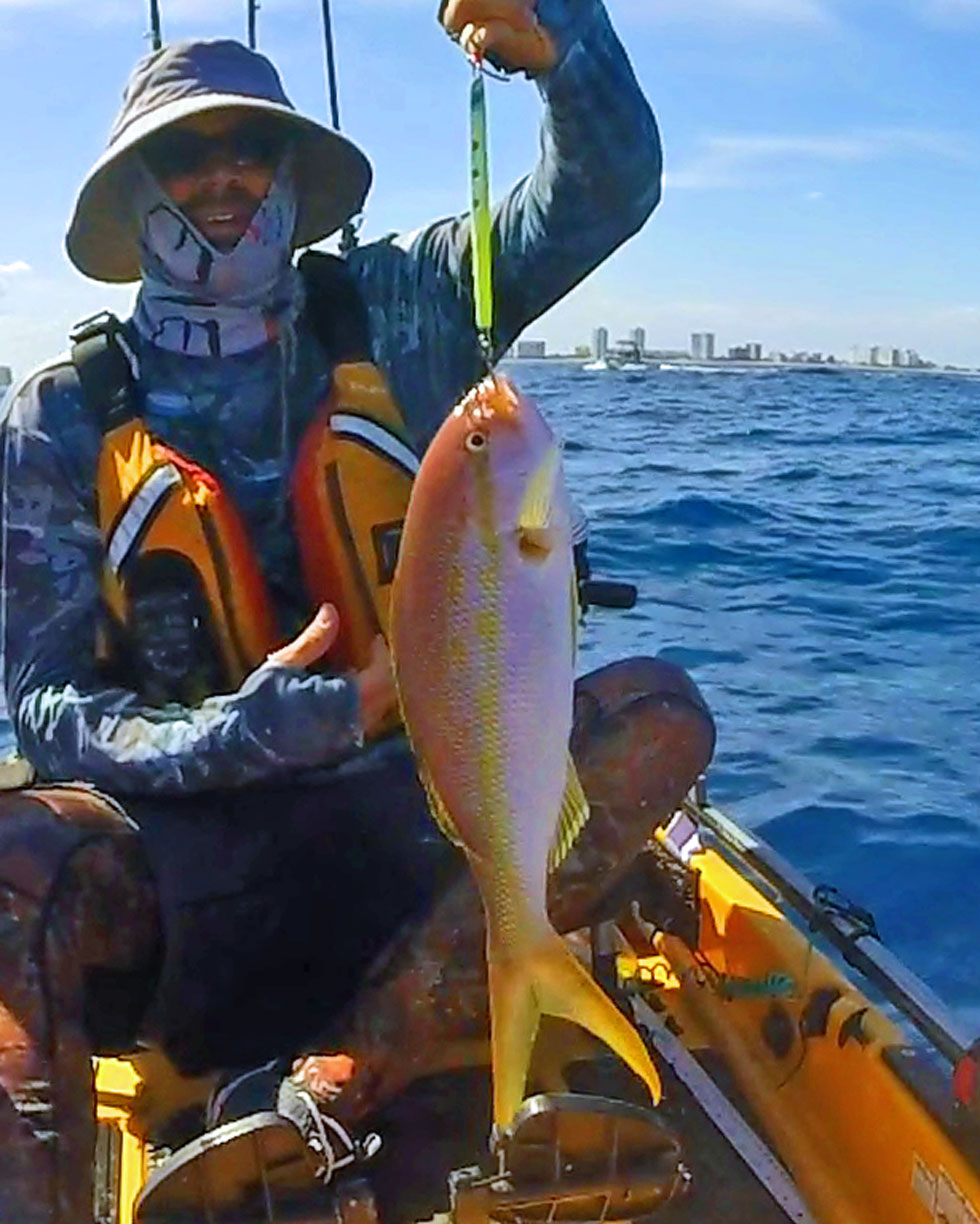 I kept metering some good targets so I kept jigging away at this spot.  Finally about 12 drops later I connected again!  --Something good and heavy, but not pulling drag.  There were no air bubbles on the meter, so that ruled out a snapper, grouper or side snagged Jack.  To my surprise, it was a nice Cobia with an equally good looking follower. 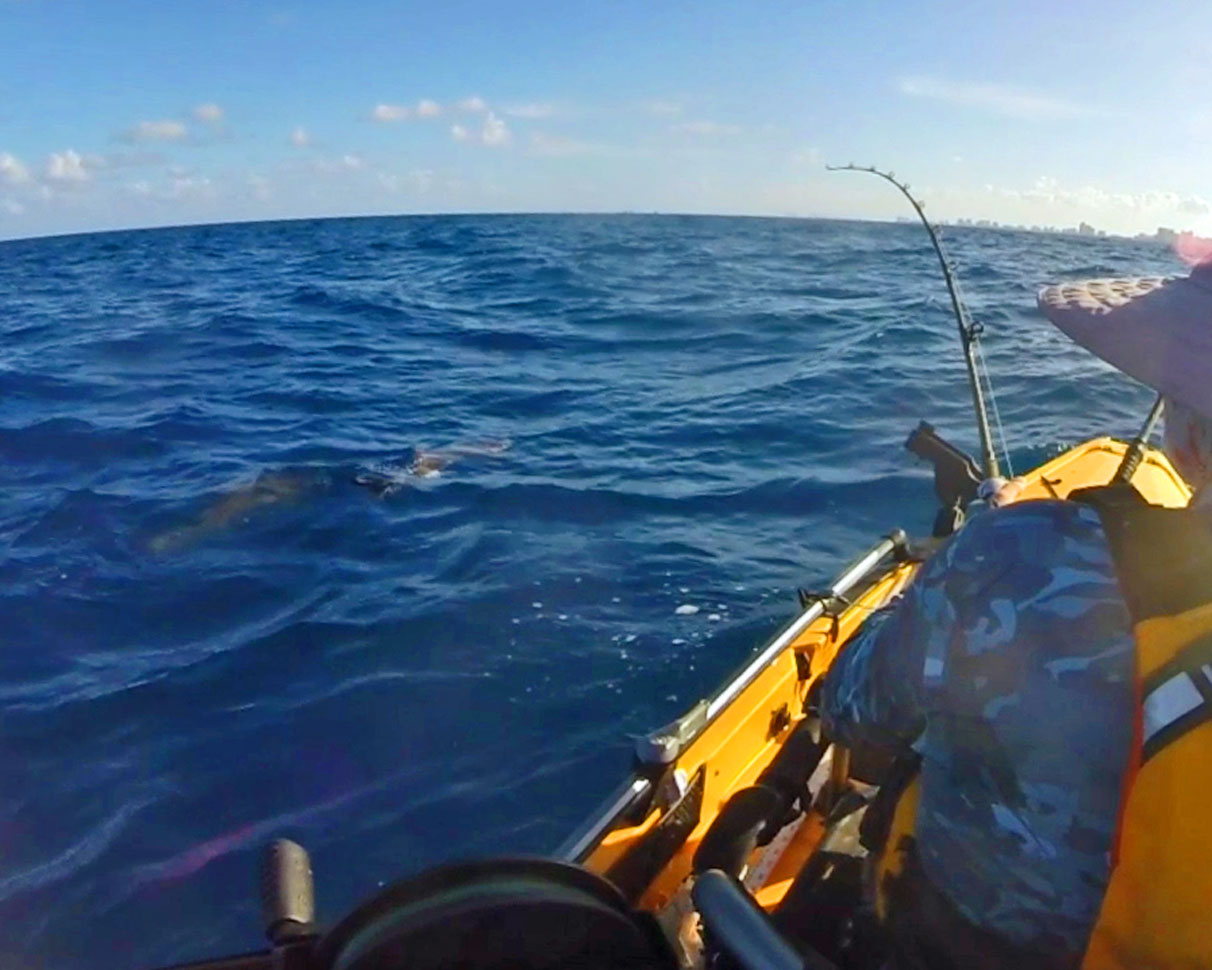 Cobias are notorious for coming in easily and then going berserk once they are gaffed -- Sometimes inflicting damage on boats and bodies.  The close quarters of a kayak are less than ideal.   After seeing that the fish was well hooked, I decided to play the fish out as much as possible.  The fish dragged me from 240ft all the way into 110ft depth of water.  Even as I thought the fish was exhausted, she managed to head down to the bottom on one final hard run looking for something to cut the line on.  After what felt like 45minutes, I sank the gaff, brought her on board and kept the Cobia pinned with my legs until she was fully dispatched. 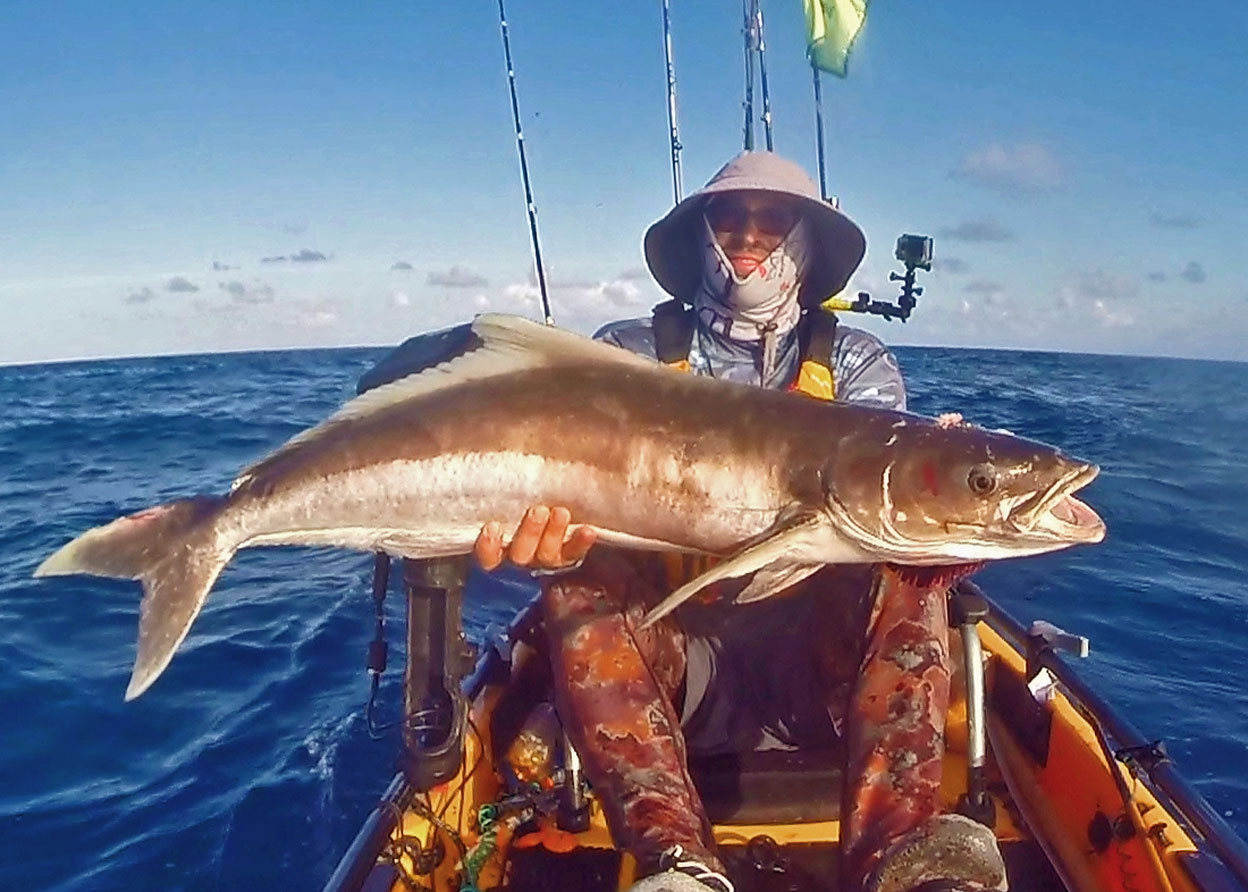 The Cobia weighed 26lbs on the scale at Atlantic Bait and Tackle and was 46" long.  Although I never found the Blackfin Tuna that some of my fellow offshore kayakers have been connecting with, The Cobia made my day!  The fillets are firm and delicious!
0 · Share on TwitterShare on Facebook