Think I got another one hooked

bgeorge Plant City FLPosts: 1,652 Captain
January 2020 in General Hunting #1
Last weekend I took the producer of the radio show out to try to get a pig.  He is 25 and was not raised in a hunting family.  He hears us talk about hunting all the time and wanted to give it a try.  My buddy hauled him up to camp as they live much closer to each other than to me.  We had him shoot a 22 for a bit and he was doing fine with it.  Put an older Ruger 308 in his hands and he was well within where he needed to be.  Put a water bottle out and he made it explode.  Ready for a pig.  He wanted to shoot my pistol so what the heck,  TC Encore in 7mm08.  Lets just say I do not think he was ready for it.  Rared back and about knocked his hat off his head.  Better stick with the 308.

Went and got in a double stand.  He practiced aiming the gun at various pine cone and tweety birds just to get the hang of bringing the gun up and getting his head in the right position.  A little after 4pm I saw a big pig working his way out of the palmettos.  Pig was moving around in the area for what seemed like an eternity.  He never felt good with the shot.  I applaud people choosing not to shoot if they do not feel comfortable with the putting the bullet where it needs to be.  The pig moved back off.  He thought his one chance was gone.  About 10 minutes later out came the pig and worked its way back in.  He put the shot right on the shoulder and dropped him in his tracks.  The pig actually flipped on his back and kicked a bit.

What happened next made me chuckle.  He was fine with the shot and harvesting the pig.  When we got down I told him to drag the pig where we could take a little better picture, he grabbed the leg to pull him and he immediately let go.  He did it 3 time and could not get himself to grab it and pull it 5 yards.  I pulled it over and we got a few pictures.  Then I put a rope on it and he was able to pull it out.  Was a little worried if he was going to be able to help me lift it up and put it on the hitch hauler.  He mustered up and got it done.

We then went to skin it and cut it up.  He had no problems with that.

He is already looking at getting a hunting license so he can try his hand out on some squirrels or even a deer.  We discussed the need for hunters ed and a mentor license option for now.

Not bad for a first one. 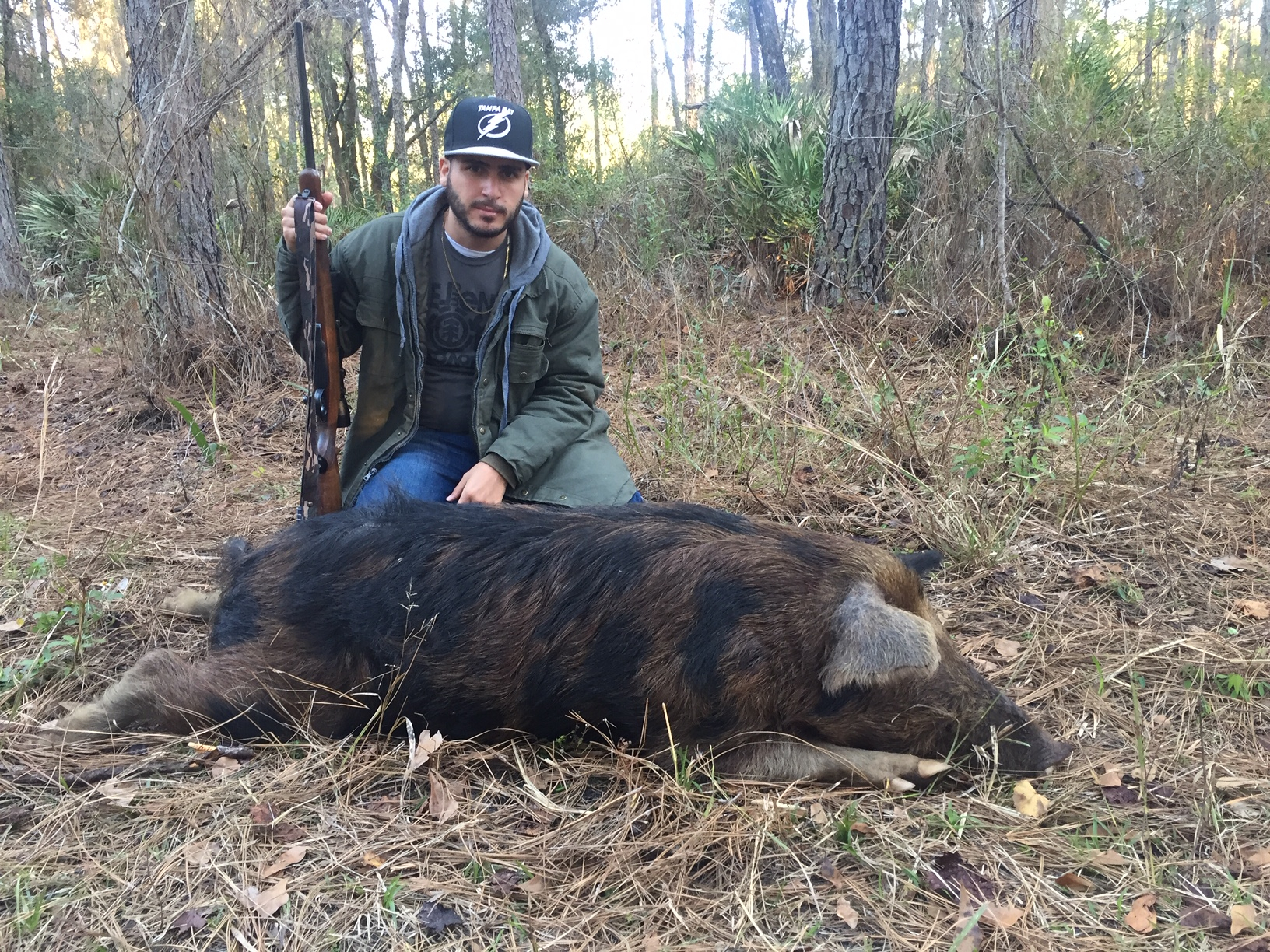 The man who moves a mountain begins by carrying away small stones. Hopefully the next man is not dropping his stones on the mountain you are trying to move.
11 · Share on TwitterShare on Facebook