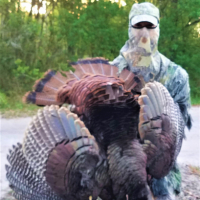 spangler daBurgPosts: 2,709 Captain
December 2019 in General Hunting #1
I think my action packed quota hunts have reshaped my thinking and approach on romp and stomps.  To be honest, I don't find a lot of sign on r&s.  At least nothing obvious.  I at least have now resolved how subtle rubs can be.  Found one the other day on a two foot tall sweet gum.  The trunk was probably 1/4" in diameter.  Could only see the rub walking in one direction.  It was the first time I was actually able to walk a rub line.  Walked it all the way to someone's tree stand lol
Even though I've got rubs figured out, I simply don't see them on the r&s like I did this year on the quota hunts.
I decided, after returning to lifeless woods again, my time would be better spent finding an area the best sign I could find, which for me, now means rubs.  I'm still not sure I've ever found a scrape.  I'm not sure how to visually distinguish them from rooting, and every time I think I've found one, there's no biting branch.
A couple weeks ago, I found a massive rub.  Inch and a half diameter tree that had well been polished.  It was dark with oils at the base of the rub.  It was right on the edge of impenetrably tight cover of gallberries and briars.  I decided to post up downwind of it under a short oak that had a thick umbrella of cover for me to sit under the rest of the afternoon.  I actually had to cut a few branches in front of me to give me a worry free unobstructed shooting path.
Before I left, I ended up setting up a camera on the tree I was sitting under, hoping to catch the buck tending to his rub.
First of all, it's the biggest buck I've caught on camera to date.  And sure enough he comes out of that tight cover.  He's tending the rub every few days.  Always at night of course.
Here's where it gets interesting.  Because I've never, with any certainty, found a scrape, I decided to create a mock scrape in front of the camera below the branches of the oak I was sitting under.  Well, when this buck first appeared on my cam, the next night, he first tended to his rub.  He then walked over to my mock scrape and..... completely ignored it. What was interesting is that where I cut the branches, he's been biting.  Vigorously.  Always a certain branch.
So was that coincidence?  That I picked his biting tree to sit under.  Or was he responding to the branches I cut over my mock scrape?  He's biting and rubbing his face every time he comes by, never does anything with the scrape.  Nothing that looks like a scrape in the area.
“There will never be a really free and enlightened state until the state comes to recognize the individual as a higher and independent power, from which all its own power and authority are derived.”
0 · Share on TwitterShare on Facebook