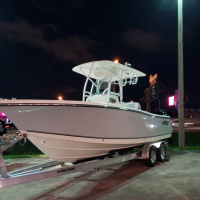 Terence1 Posts: 216 Deckhand
September 2019 in South General Fishing & The Outdoors #1
Left the port around 7:30 to a rougher sea than forcast with a couple of newbies on board. Chase some bait fish see saw just south of the inlet. Tried to hook up with whatever was chasing them but could not keep up.
So we headed out, got to 800 ft. and saw nothing. No weed, no birds very very few flying fish. So we put some baits out and hoped for the best. We drug those baits around for an hour and finally got one on. The newbies girlfriend was more more excited than he was. It was a small dolphin, but it was a keeper (barely). Trolled around for another couple hours and called it a day.
At least they got couple of dolphin sandwichs out of the trip. The fishing was a bit challenging to say the least but they did have fun.
1 · Share on TwitterShare on Facebook