I tried something different this time.  Instead of doing a drift that requires leaving the kayak on the beach and taking an Uber back to the launch site, I brought my bicycle with me.  After setting up my kayak ready to launch off the beach, I drove the truck to the final destination beach location and parked it.  I then peddled the bicycle back to launch location where I locked it prior to starting my fishing trip.  This added 45 minutes onto the morning commute prior to launching, but easily shaved double that amount of time off the drifting kayak retrieval process, plus saved me the time of waiting for and paying an Uber.

I launched off Del Rey Beach at 5am in eerie calm conditions with dark menacing clouds farther offshore, and lightning flashes in the distance.  It had been raining lightly earlier, and I had checked the weather apps to confirm the storms were moving away prior to launching.  I was unsuccessful at finding blue runners or goggle eyes for bait along the beach during the hours of darkness, so I headed out to try some jigging at sunrise.  I metered some scattered schools of Little Tunny in 190ft of water. 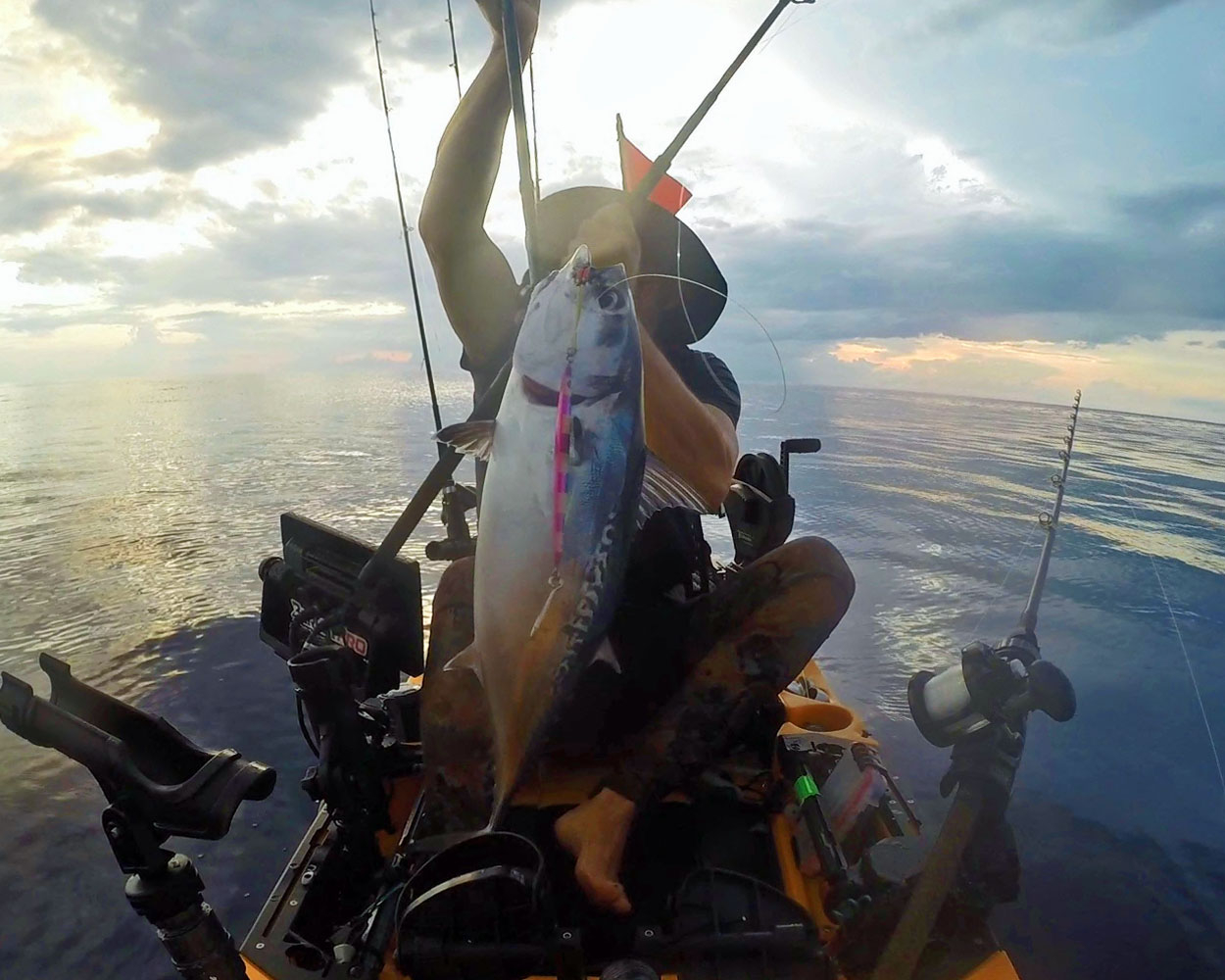 Around 7:15 am, I bought a half dozen goggle-eye baits on the water from a local supplier.  With the exception of a 46lb King Mackerel taken a couple of days earlier by a private boater, the overall fishing report was slow for the area. 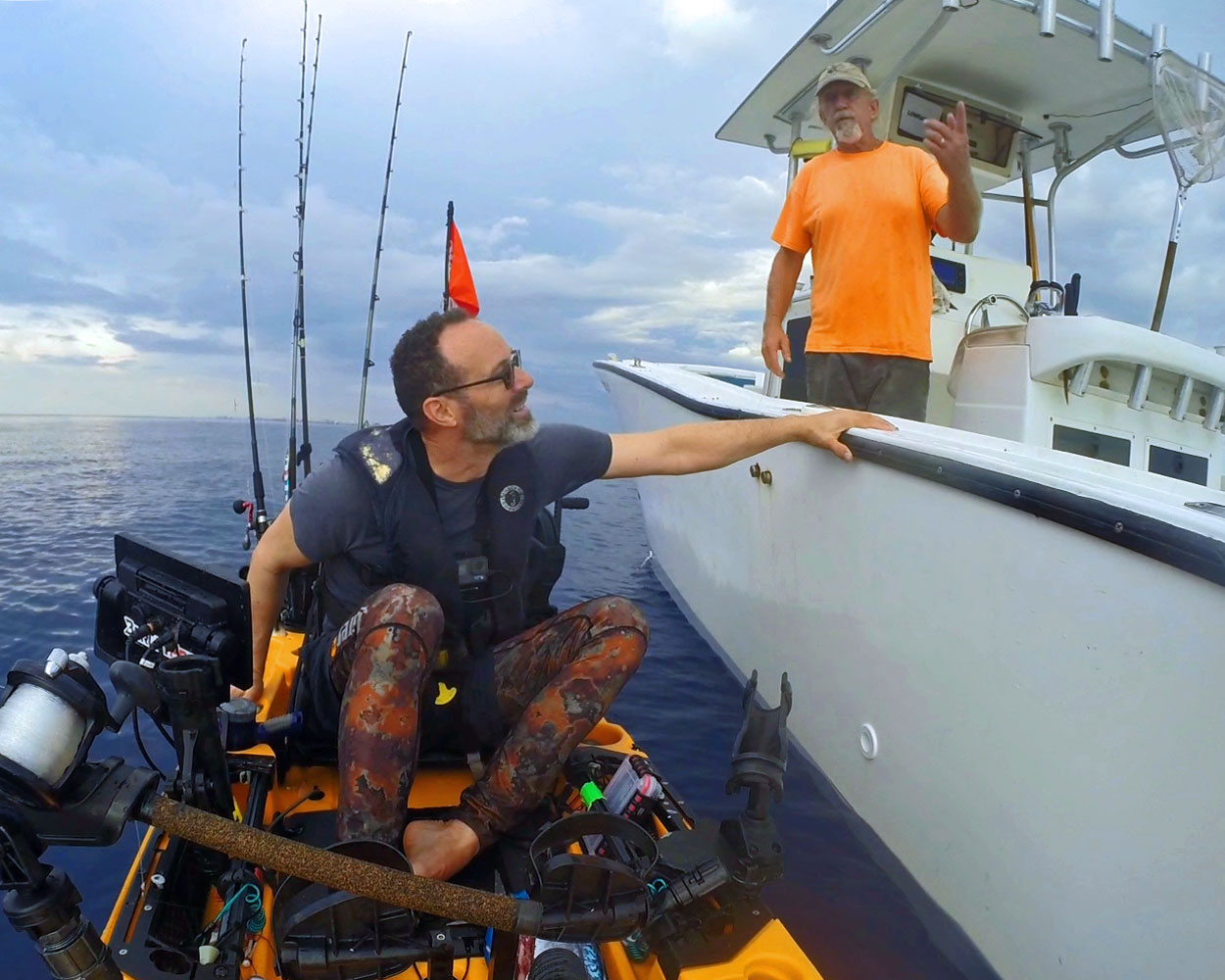 With 6 baits in the Livewell, I then proceeded to troll 1 bait deep and a second on the surface while casting and vertical jigging ahead of my locations.  The first strike felt like a king, screeching pulling out line fast until it went high and jumped.  Ugg, it was a Barracuda.  It was a fun fight that I enjoy, but not what I was hoping for. 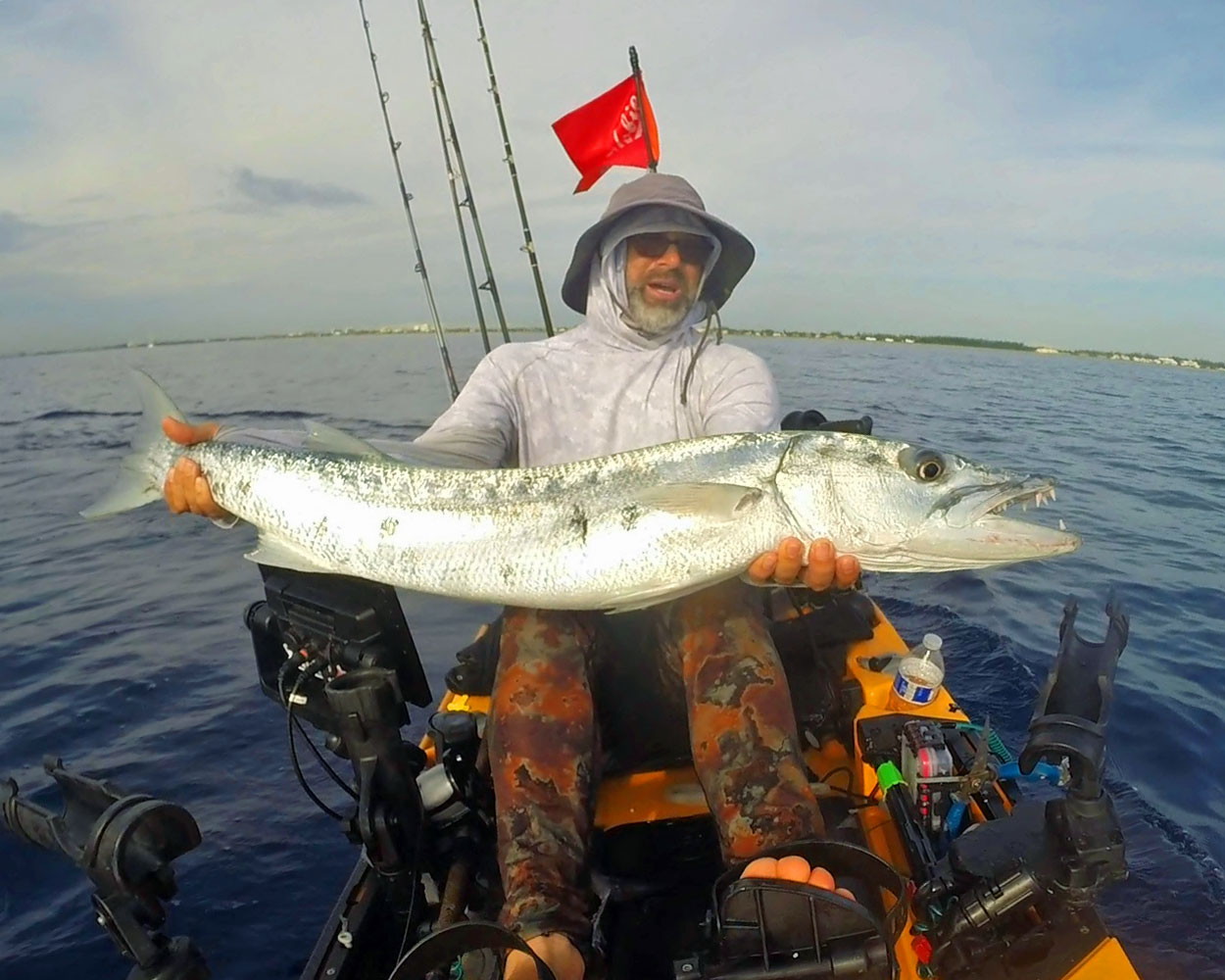 Next strike was again on the surface bait, and this fish did not make a smoker run.  Expecting to see another Cuda, I was surprised to bring up a King Mackerel. 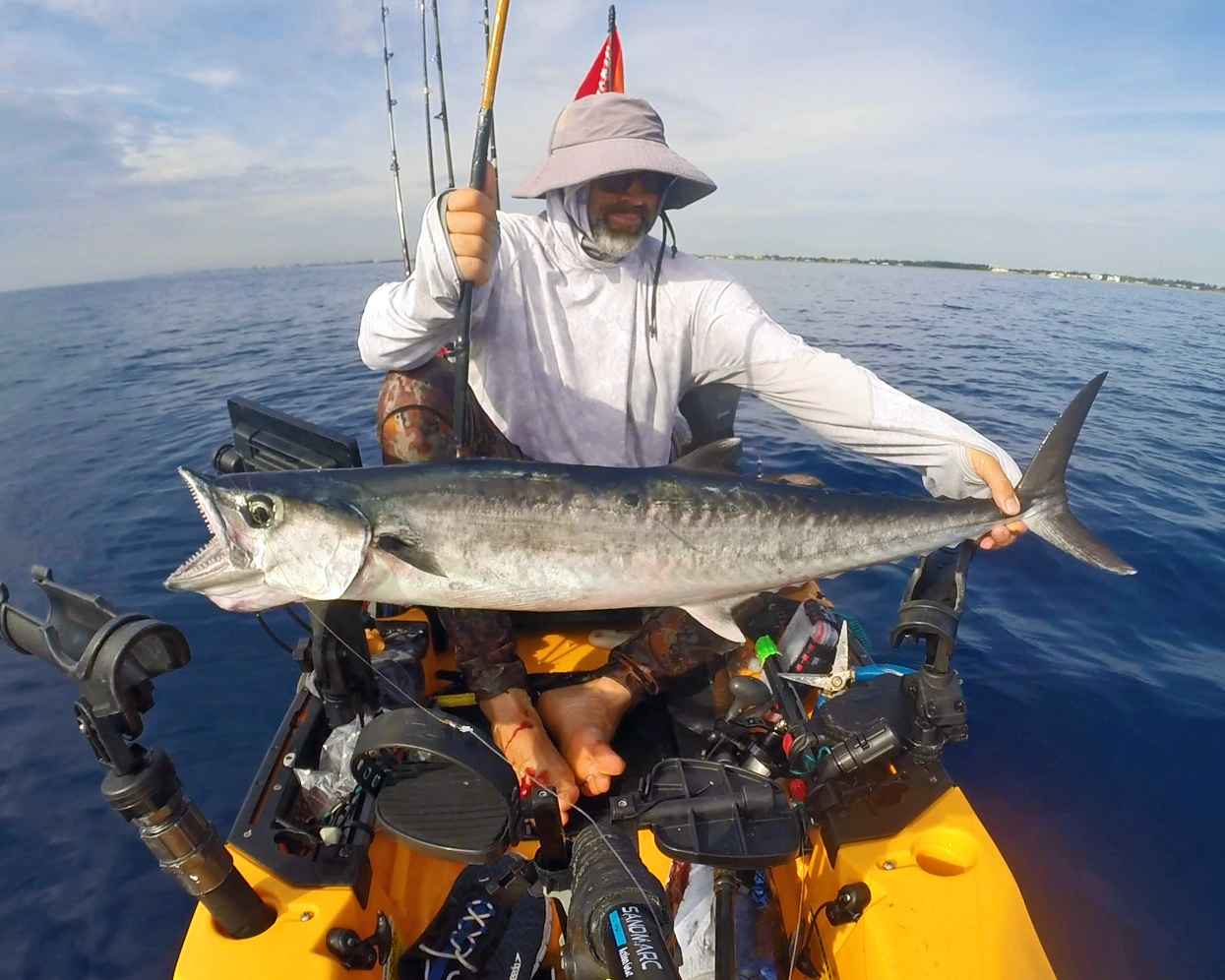 After that were two missed strikes and 2 more smaller barracudas.  Vertical jigging proved to be the most successful means of landing fish on this outing, producing another Little Tunny, a Barracuda, a King Mackerel, an Almaco Jack and hooked and lost a battle with what felt like a big Amberjack. 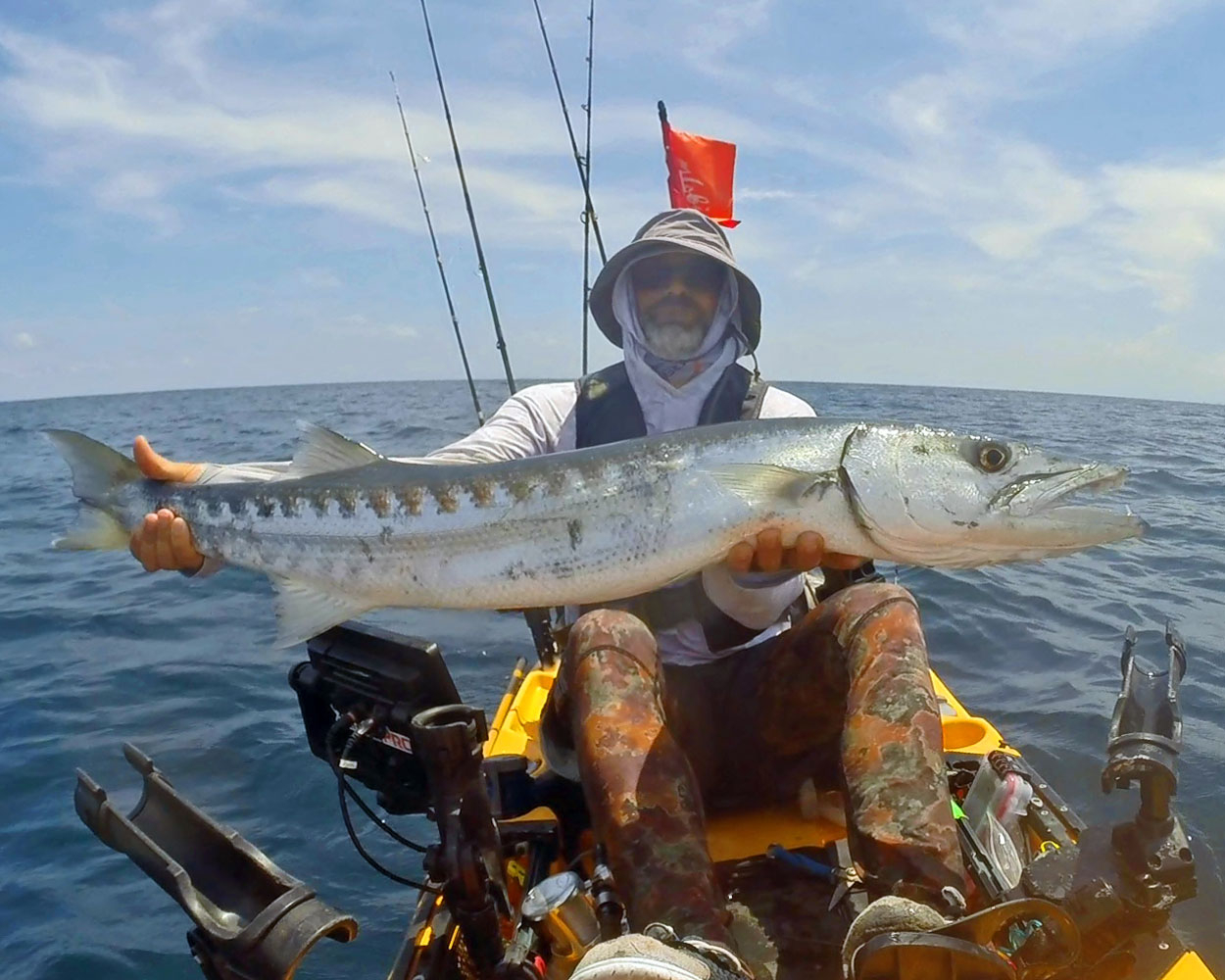 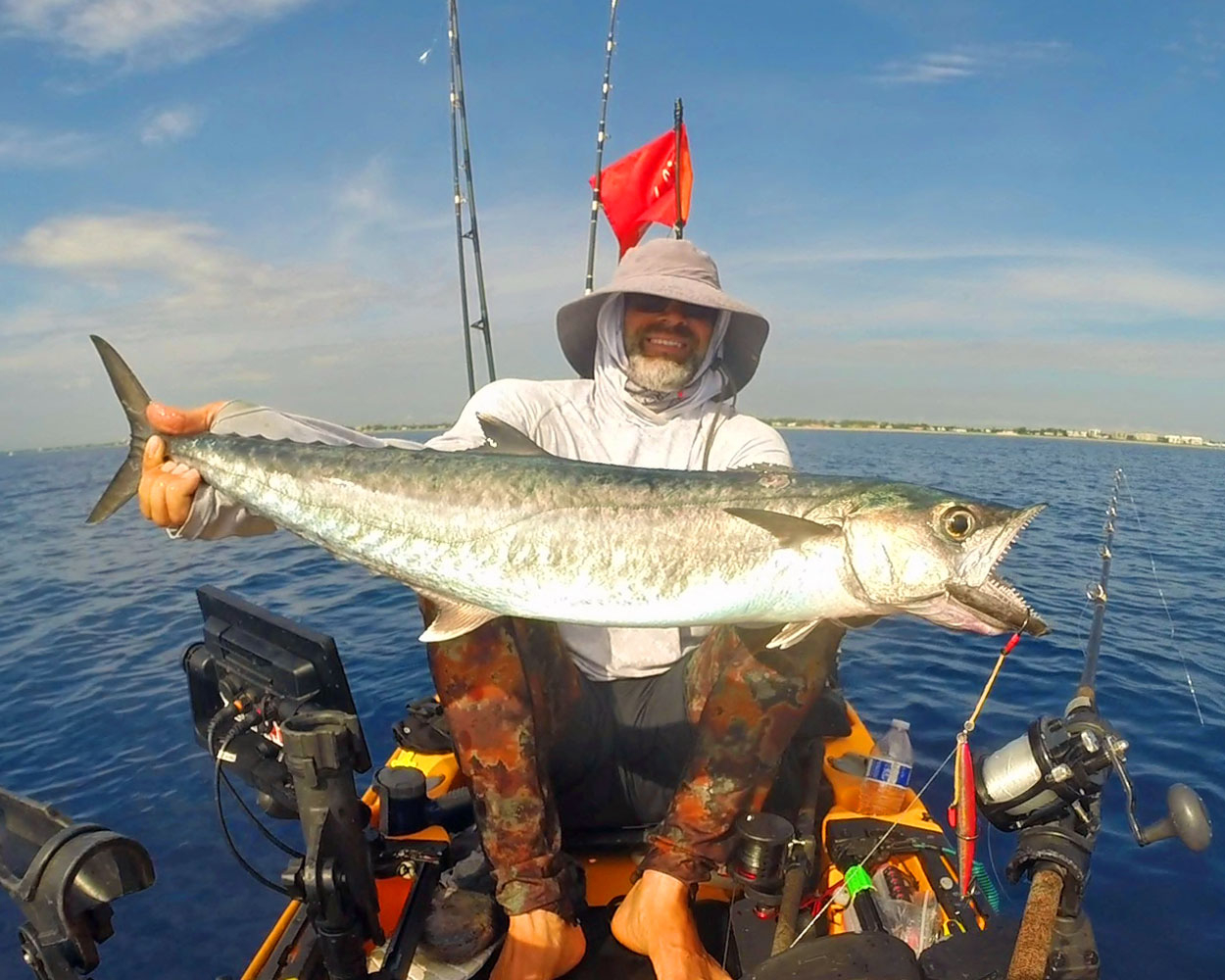 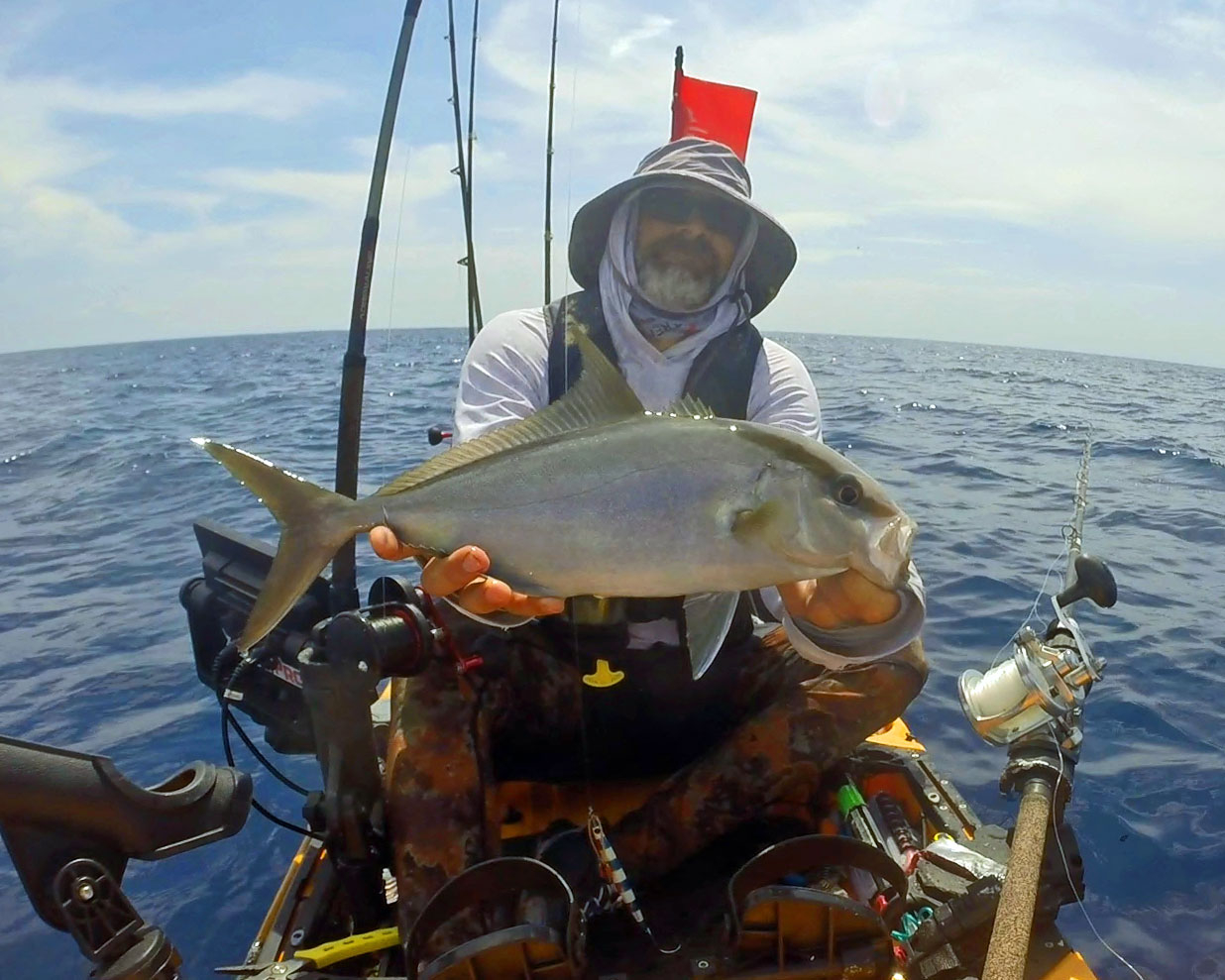 The current was less than 1knot Nth all morning and got up to 1.8kts by 1pm when I decided to head into the beach.  Total count for the trip was 4 Cuda, 2 Kings, 2 Little Tunny, an Almaco Jack and 1 shark, caught twice.  I released the shark once, and 5 minutes later next strip bait I put out he decided to eat.  All fish were released except for the King Mackerels and 1 of the Little Tunnies.

If anyone is interested in getting a kayak and trying this sport, I recommend checking out Nautical Ventures in Dania Beach.
1 · Share on TwitterShare on Facebook