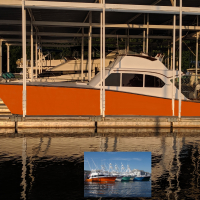 Hello all! I am new here to FS. I wanted to pop in and say hello! I am absolutely obsessed with the show Project Dream Boat and what the guys over at MCU do! I have always been a car guy and have tinkered and built them forever. I have lost the passion for that and now think boats might be my new calling! I have over the last 6-7 years got the bug for a boat. Apparently I have expensive taste because everything I was in love with had a 6 figure price tag. Since I live in North Alabama right now it doesn’t make sense for me to have this much of a boat payment for a Gulf offshore boat that would sit a majority of the time. I love saltwater fishing and love the gulf coast. My goal is to retire to the gulf. I come every year now and end up chartering a boat. Normally doing 10-12 hour trips but have done as long as 48 hour trips for some Tuna. These trips had already started the fire for a boat. Once I started watching project dream boat 8-10 months back it poured jet fuel on the fire. I ended up buying a 19’ Polar CC for really cheap with the plans to fish it on Lake Guntersville as well as do some inshore fishing in the gulf. Well it ended up having a lot of glass work needed that sent me on a You tube learning adventure that made things even worse. A few days after I bought the Polar my cousin finally called and offered to sell me a 24’ Proline CC I had been bugging him about for months. It had been sitting for quite a while and needed a little TLC. Well this ended up being a flop because the engine had one cylinder with low compression. Well I have been looking around trying to decide on the right engine combo (putting the boat back to twins) that was in my price range.

As I am searching I stumble on a 1976 42’ Post Flybridge Convertible on an auction site. It was at one of the local marinas and the folks had abandon it and just never came back after 4 years. So there were tons of unknowns. The bid was low enough to peek my interest. I convinced the wife we should buy it and slip it in the Gulf for whenever we wanted to go down and fish we could. Well after calling around and getting prices for slipping a 42’ there it just didn’t make sense to spend that much money with me having 15-20 years before I retire. I talked myself out of buying it so I didn’t even go look at it. This was for sure an end goal boat for me though. I still kept an eye on the boat and on the last day with 30 minutes left the bid hadn’t moved. I talked to the wife and agreed we would put in a bid with the thoughts I would be Proxy bided out immediately but at least if someone was going to own it for that cheap it was going to be us. Well I ended up with the winning bid for thousands less than my bid! So now I am the proud owner of a 1976 Post Yacht!

The day after I won the bid I went to the check it out. The lines and size of this boat was lost in the pictures! My first thought was MAN she has some sexy lines! The next thought was WOW she is BIG! She needs a little work but is in over all pretty good condition. She is powered by twin 350HP Crusader 454s and has 9KW Kolher genset. I had to rebuild a few seawater pumps and did some oil changing and added some marvel mystery oil to the cylinders before we ever stuck a key in it. I had 7 days to have it moved from the marina it was located at to one that was closer to me. Note the closest I had ever come to messing with one prior to this purchase was getting lessons on how to operate a head on a charter boat. To say I was lost on how everything worked was an understatement! Lucky for me I have a good friend that knows a lot about almost everything. Without his help I would be paying slip rent at the original slip still. Anyway it purred like a kitten once we got fuel up to the engines. On the last day I had we moved the boat over to the other marina. It was a 45 mile sea trial! We took it slow at around 8-9 mph enjoying the day. I was as nervous as a long tailed cat in a room full of rocking chairs when I climbed up to take the wheel. The largest thing I had driven by this point was a 24’ Pontoon boat and I had to land this Yacht on a fuel dock first thing. I learned in the first minute that the rutters were useless at idle speed and put here next to the dock without even a bump using just the engines. I ended up docking her 3 times that day without bumping the first rail and even had my first experience passing through the locks.

I have owned the boat now for about 2 months. I have learned more in this time about the inner workings of one of these than I thought was even possible. I have a laundry list of things I want to do to it as far as upgrades but staying with the classic look these boats are known for. I now can think of nothing else but what I want to do next! I lay in the bed at night and roll through things in my head adding to the list of stuff I want to do! I have even been going back through all the old episodes of FSPDB on my DVR for inspiration. It’s like a diseases! The first modification I did was tinting the windows and getting the awful make shift curtains down! The change in the look from that alone was amazing! I have also started sanding the top of the teak rails on the AFT area. Well I am sure by now most of you have been bored by my story and scrolled down to the pictures. I will keep you all posted on upgrades as I am doing them. For now here she is. 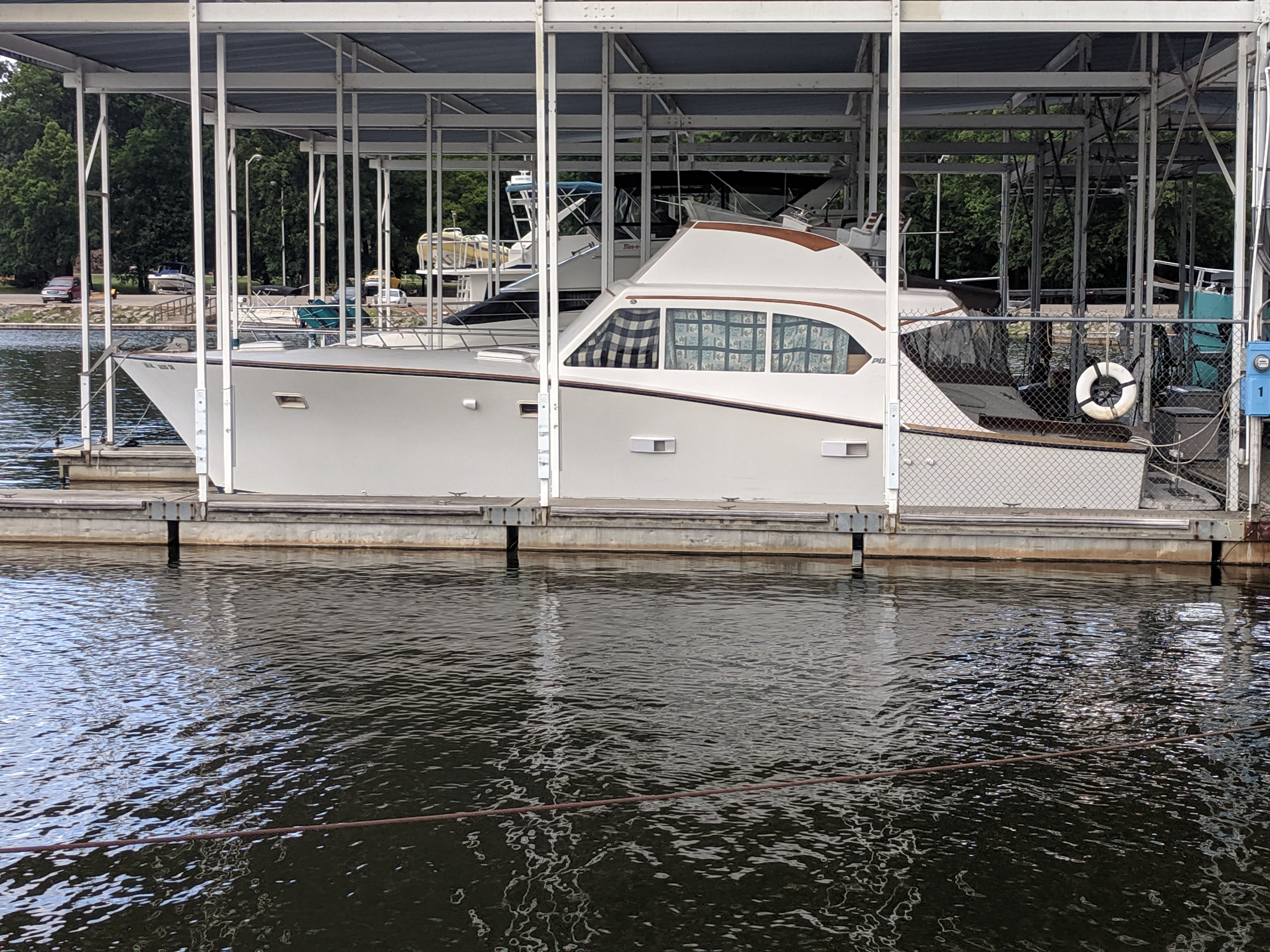 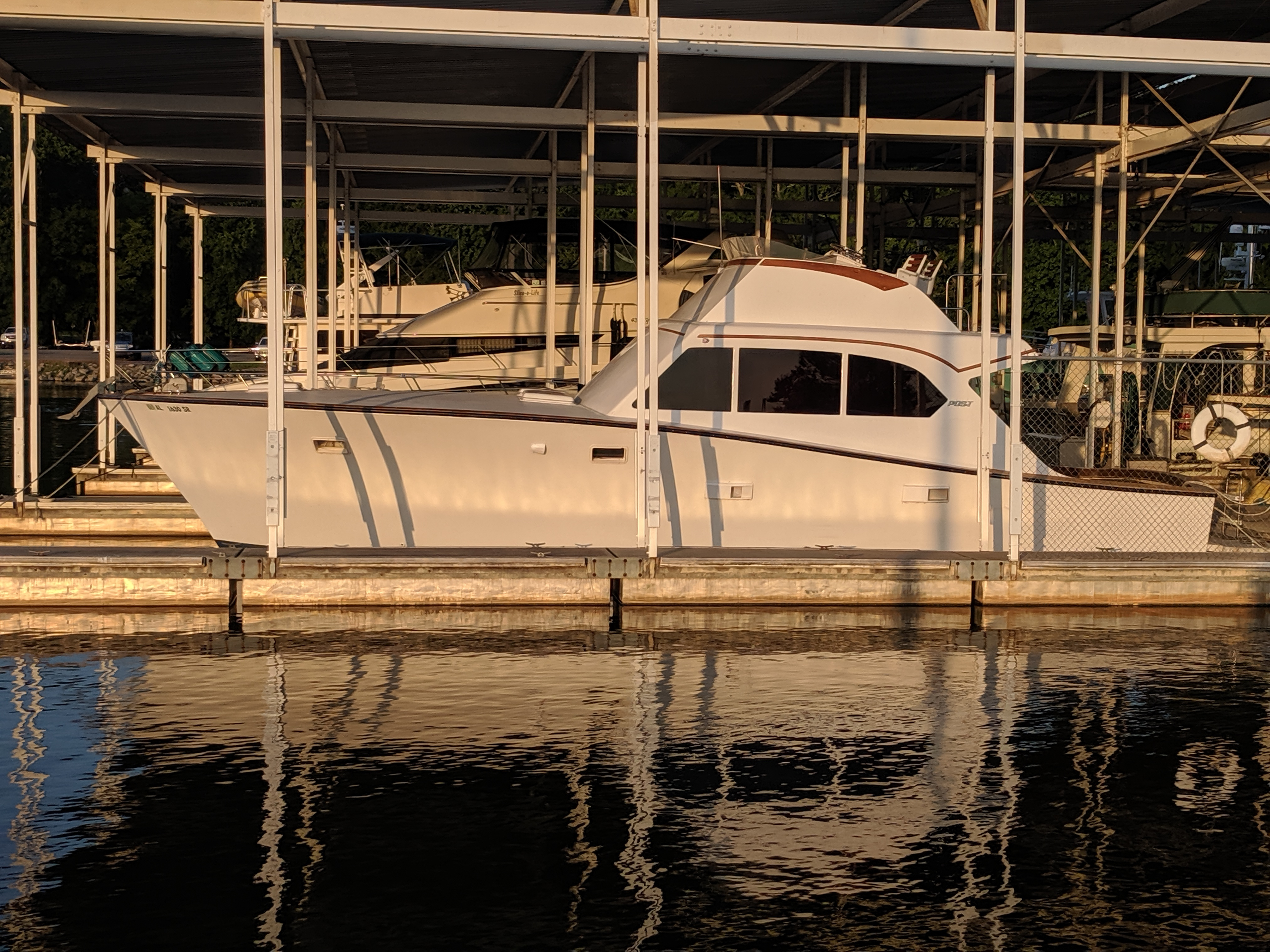 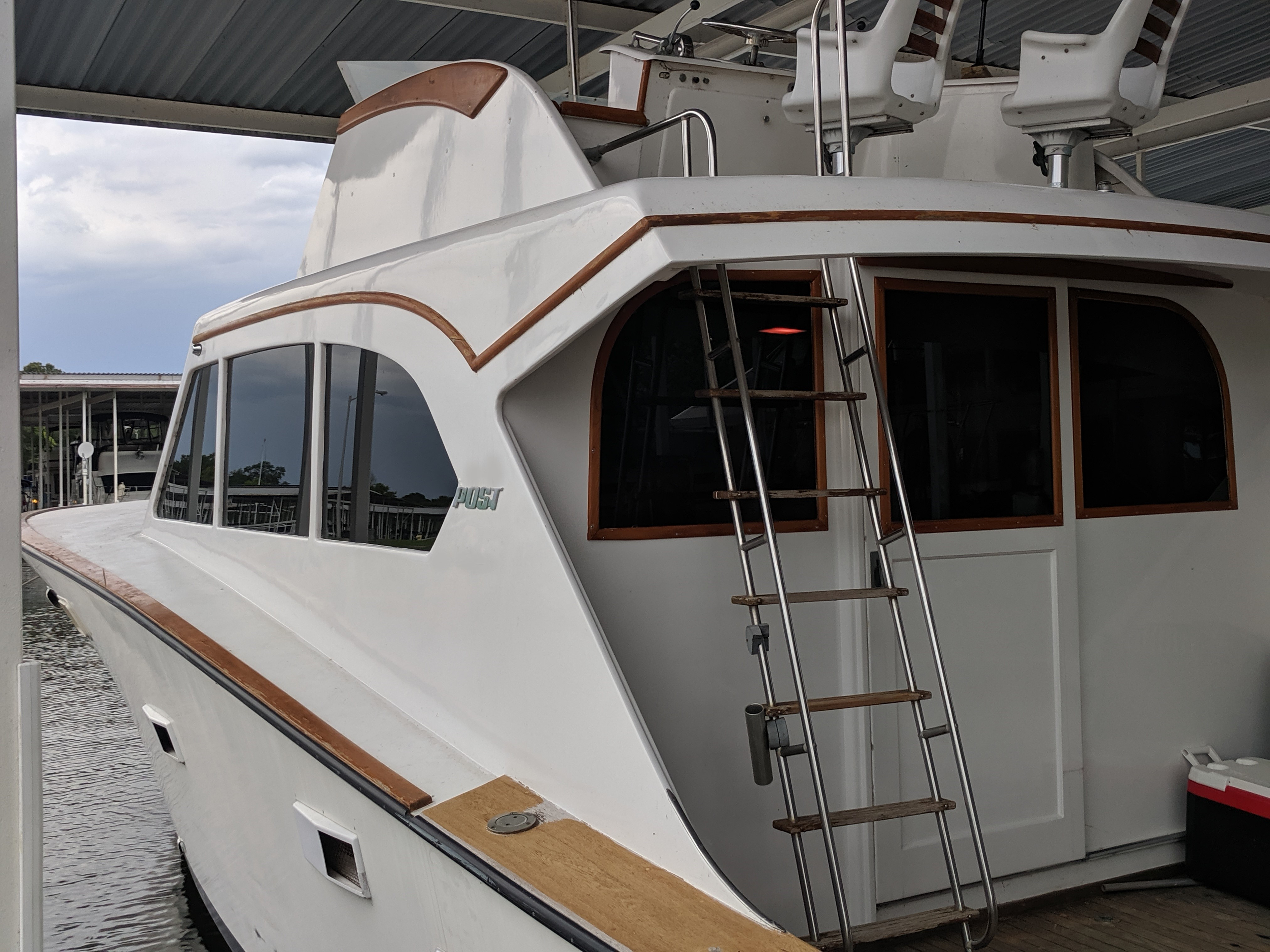 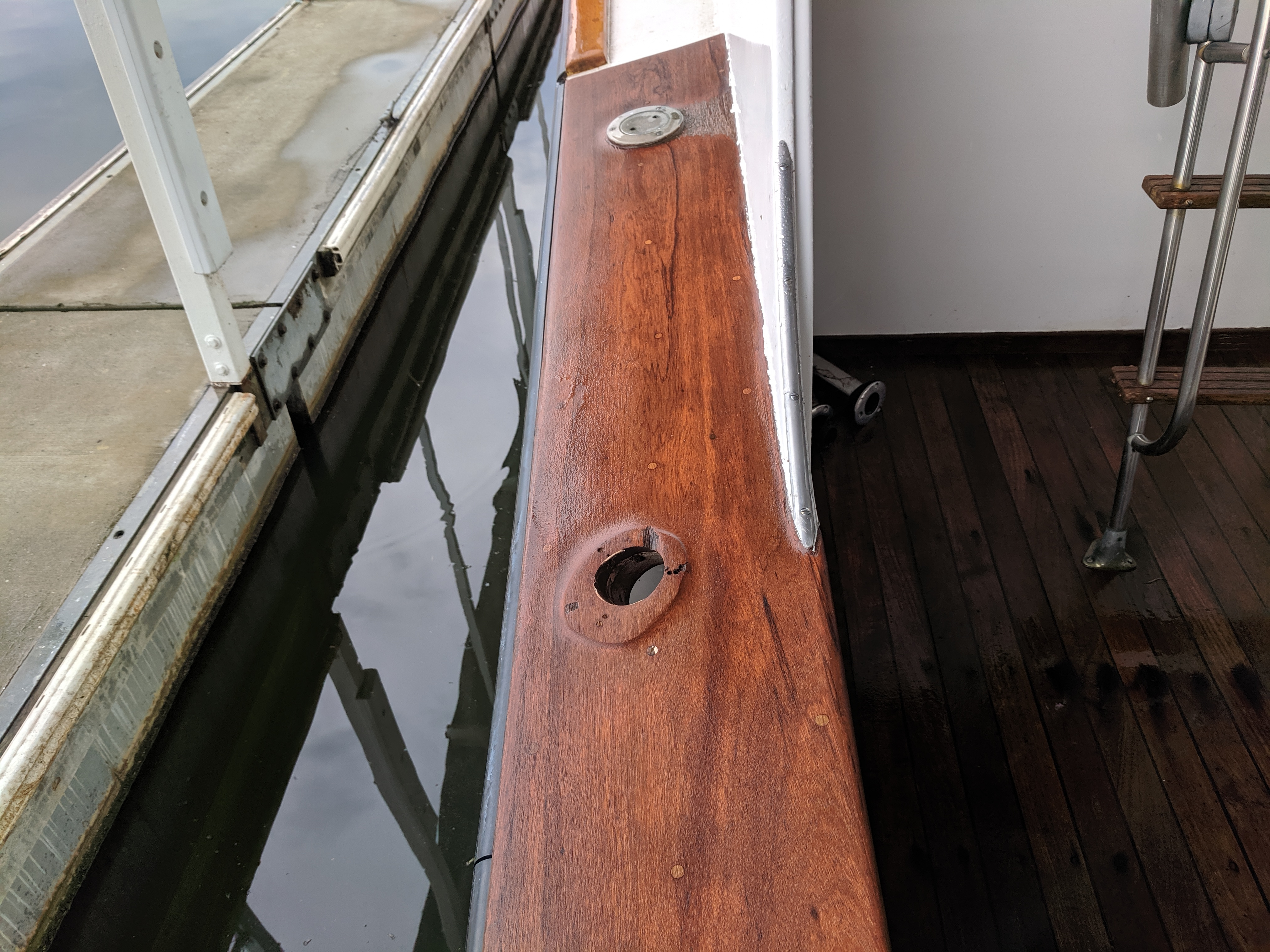 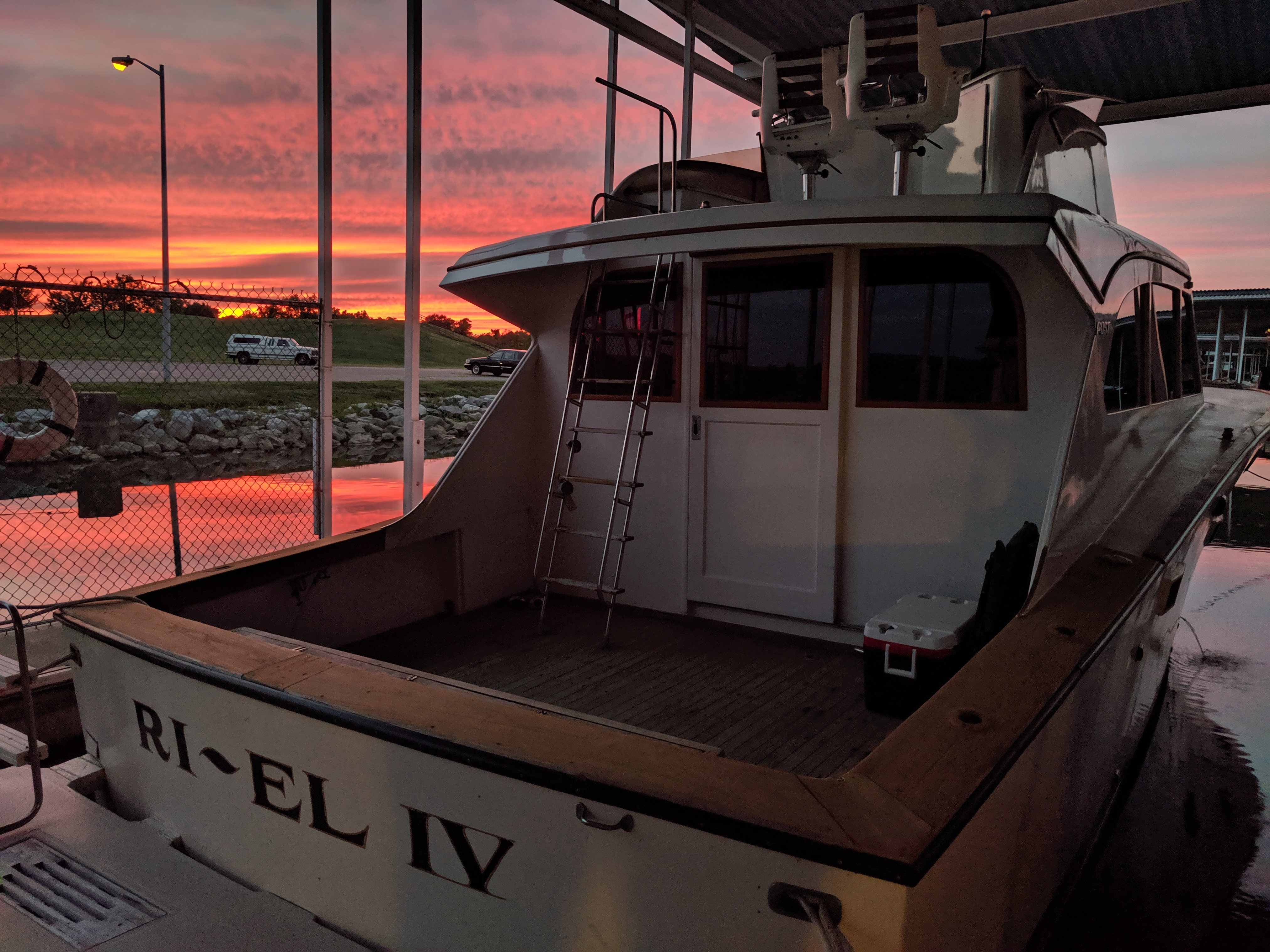 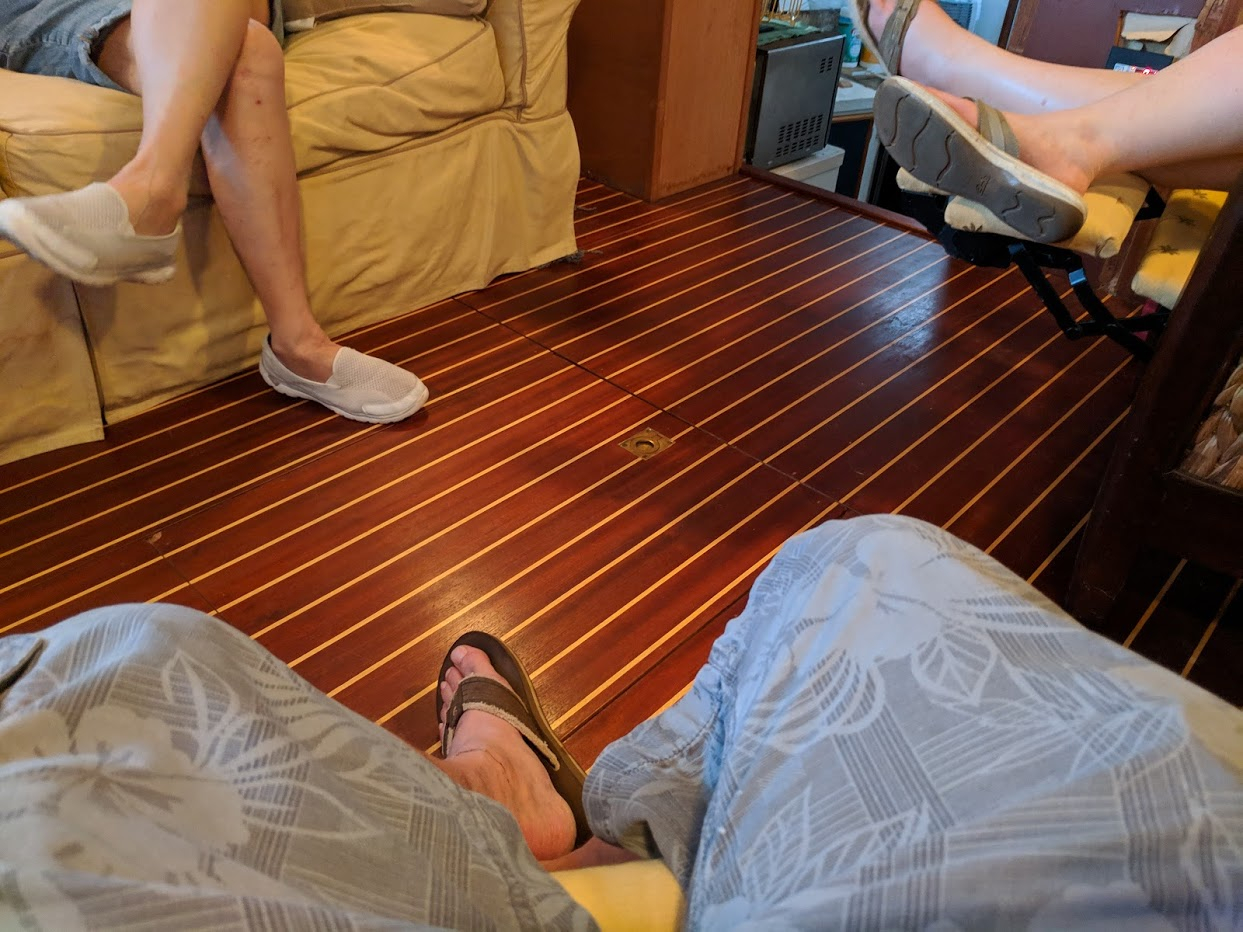