The day started early, 6:30 am for a 6 pm departure.  I had to pick up Mike, my fishing partner, and make a couple stops to get bait on our 6-7-hour drive to Stock Island, home of the Yankee Capts.  Getting fresh bait lately has been tough.  Normally we’ll try to take 5-6 dozen fresh baits for the 2 of us on a 3-day trip.  Our bait guy was only able to get 2 ½ dozen fresh goggle eyes so I packed a cooler with 5 lbs of squid and about 2 dozen frozen gogs from a previous trip.  As luck would have it, when we met our guy, he said someone raided his bait pen and he only had 15 baits.  So we made a stop at a bait & tackle shop and bought a couple dozen ballyhoo, goggle eyes and speedos.  (All supposedly fresh).  The boat was already loading when we arrived so with the help of the mates, we transferred our coolers, tackle boxes, poles, sleeping bags, etc. to the boat.  I had over packed as usual.  Soon the parking lot was full as this process was repeated for the rest of the anglers and it was time to depart, rig a few poles, eat, and get a good night’s sleep.

About 5:30 am Greg pulled the throttles back and as soon as the sea anchor was deployed it was time to start fishing.  The way things started out I thought it was going to be a great trip.  By about 9 am I had 2 decent mutton and a big red grouper in the box.  There were fish coming up here and there around the boat.  Mike had a couple nice fish and Dudley, another regular fishing near me, had 3-4 nice mutton.  But as soon as the moon went down the bite turned off and it was tough fishing for the rest of the trip.  We tried different baits, lighter leaders, tried jigging, anything we could think of to entice the fish to bite but nothing seemed to work. The wind started to pick up the second day which didn't help matters any.  A group of 4-5 guys who were jigging the whole trip didn’t fare much better than anyone else.  Greg moved areas several times trying to find fish that wanted to bite with little luck.  In the end we had 12 totes for 18 -19 anglers, which is poor by YC standards.  I think I ended up with 3 mutton, 4 grouper, several almaco jacks, 1 large porgy and a nice black fin tuna.  Mike did about the same so we still ended up with plenty of fish to take home.  A very nice black grouper took the pool.  (Sorry, I didn't get a picture of it.)

Mike with a couple red groupers 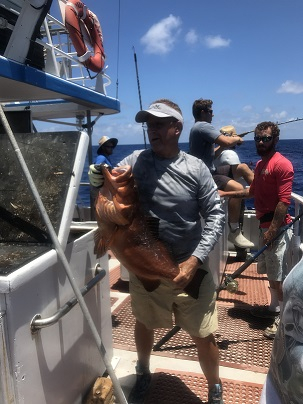 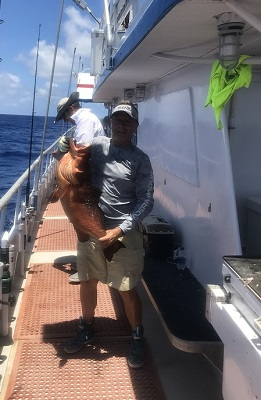 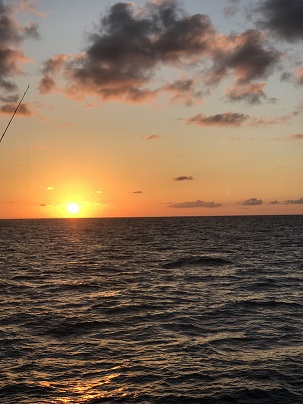 Brizo keeping an eye on things for Greg. 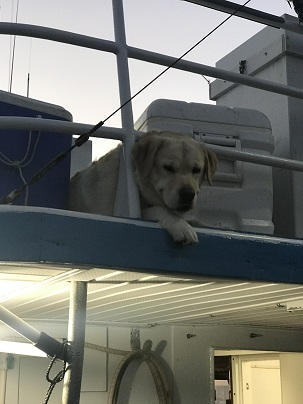 Mike with his King Fish and Black Fin. 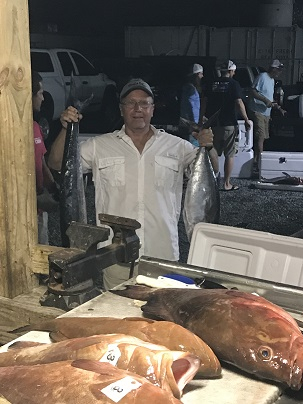 Someone's catch laid out for cutting. 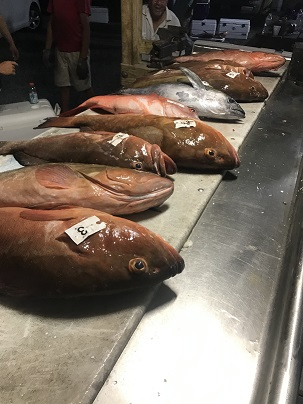 As I said, before Greg did his best to put us on hungry fish but as the saying goes, “you can lead a horse to water, but you can’t make him drink.”  The mates, Lyndon, Mikey, and Marshall were helpful as always and were right there if you needed anything. Mikey will have gone "back up north" by the next time I go. I will miss his help and, at times, his strange sense of humor.  As for Chad, I just can’t say enough about the food he puts out of the small galley and equipment he has to work with.  This time I made an extra score.  In the past, I have raved to him about how much I like his crab cakes.  He knew I was coming on this trip and had a whole container of his crab cake mix for me to take home. 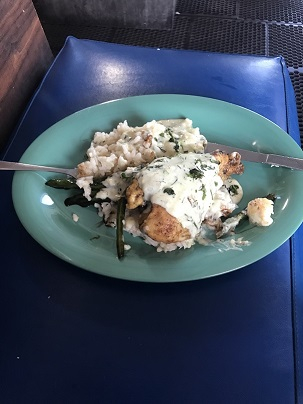 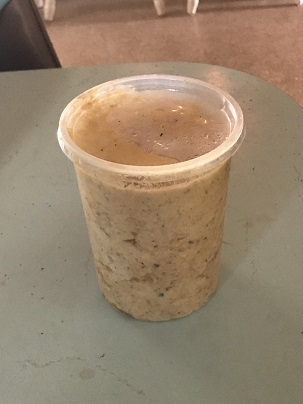