What’s happened to the flats north of Fort Pierce ? 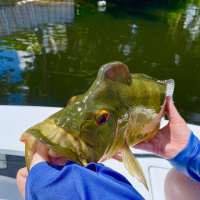 Redfinatic Posts: 57 Greenhorn
April 2019 in Southeast General Fishing & The Outdoors #1
Moved over acres and acres of flats North and East of the North bridge.
No grass to be found what’s so ever, all sandy hard bottom.
Am I wrong or in the wrong area?
fished a culvert with water pouring out and no predators to be found.
Very little opportunities on artificials.
0 · Share on TwitterShare on Facebook