This being a 44 Hour Full Moon Trip leaving at 10:00 AM there is no time to catch bait. Another factor is Gag Grouper and Amber Jack remain closed. All of this added up to my decision not to seek live bait and thus straight from Hawthorne to the Boat. We left on time under decent conditions with the knowledge the good weather was temporary as it was to get progressively nasty as the weekend progressed.

We started just after 7:00 PM in good conditions. With the Full Moon, current is always a concern. Strong current can be an issue especially when Mangrove Snapper fishing as it makes developing a chum line difficult. Tip/ (This tip mainly benefits those who can cast.) Staying in the chum line is vital to consistently catch fish. This is even more difficult at night with the boat swinging. If possible, use the Moon or Stars as a waypoint. Once you establish the chum (current) line try to cast in a way that keeps you in it. It takes practice but trust me it is well worth it.

The first stop was decent but the second was on fire as were most of the stops all night.  One stop in particular was fantastic. Mangos were coming up everywhere. There were also Flag Size Yellow Tail Snappers and “Big” Vermillion. Of course, Gags and American Red Snapper were plentiful. Even though they have to go back they are fun to catch. In all I caught and released six Gags throughout the trip and more ARS than I could count as well as undersized Red Grouper.

One stop we not only caught all the above but the King Mackerel took off. You could see them streaking in the Moon light all around the boat. When they are like this it doesn’t take much to target them. The easiest way is to flat line some bait on a Jig with wire leader. Make sure to set your drag right as King’s make an initial strong run.  Even though I wasn’t targeting them I caught two decent ones back to back.

Even though the Kings were chewing I targeting Mangos. They continued to chew and the average size was impressive. On the same stop as the Kings I tied off a stringer of 10 Goozers that were all 5 LBS are better. (Side Note: The Jackpot Mango was over 9 LBS.) On this spot I was reeling what I was sure was a nice Goozer and Bang! It got slammed.  After a few seconds of screaming drag it let go and the Mango was still on. I kept reeling and Bang it was hit again.  More drag singing and again it let go. The Snapper was still on so I continued to reel. Just when I thought it was in the clear BANG! Hard Slam! This time there was no letting go.  What ever I had took me straight to the bottom. Keep in mind I was using my Snapper set up with only 40 LB test.  I continued to fight the beast on the Pulpit of the Bow in 15 -20 knot winds in 3-5’ seas temperature 40 degrees and spray hitting my face and I was loving every minute of it! After a tense battle it ended up being an AJ in the 80 LB. range.

At Sunrise Captain Bryon said we would make one more stop in this area.  I dropped down a large Threadfin and let it soak. The current was picking up as were the seas. I continued to let my sinker bounce along the bottom and Bam! Nice Fish ON! I had it coming up but about mid-way it came un-buttoned. Frustrated but undeterred I dropped down again and got hit quickly. This fish was smaller but still decent. Turned out to be a nice Mutton Snapper.  Can’t help but think the one that got away might have been as well.

Next, we made an hour move to deeper water targeting Scamp and Red Grouper. On the first stop I got hit as soon as I hit bottom. Turned out to be a nice Scamp in the 4 LB range. I also caught a keeper Red Grouper.  Overall the boat did excellent on this stop as at least a dozen nice Scamp came up.

We tried several more stops in this area but the seas were picking up making the anchor continuing to drag. With the seas building and predicted to get much worse the Captain had us steadily working towards the North so the boat would be in the best position for the ride home.

Time for one last stop. I cast out and got slammed on the way down. My drag was singing. I finally turned the fish and began “working” him in. I thought my drag was right but my leader popped. While I was tangling with my fish the gentleman next to me got hooked up. I got re-rigged just in time to Gaff a large African Pompano. I was certain that was what I had on.  I cast out and got hit again. I’d set my drag a little looser and this time I landed a beautiful African Pompano in the 25 LB range.

Time to head home and hope the weather permits us to go again this weekend! 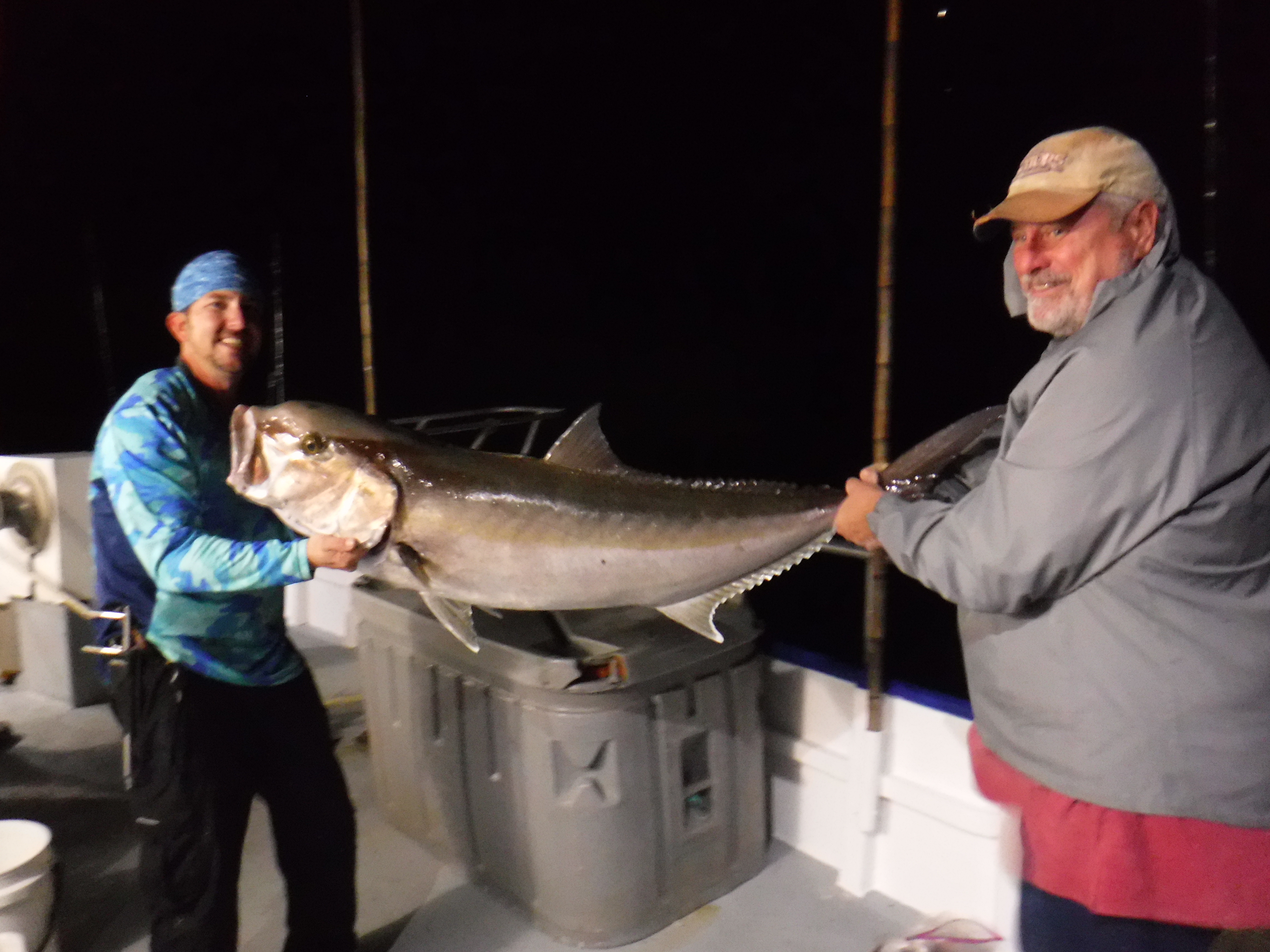 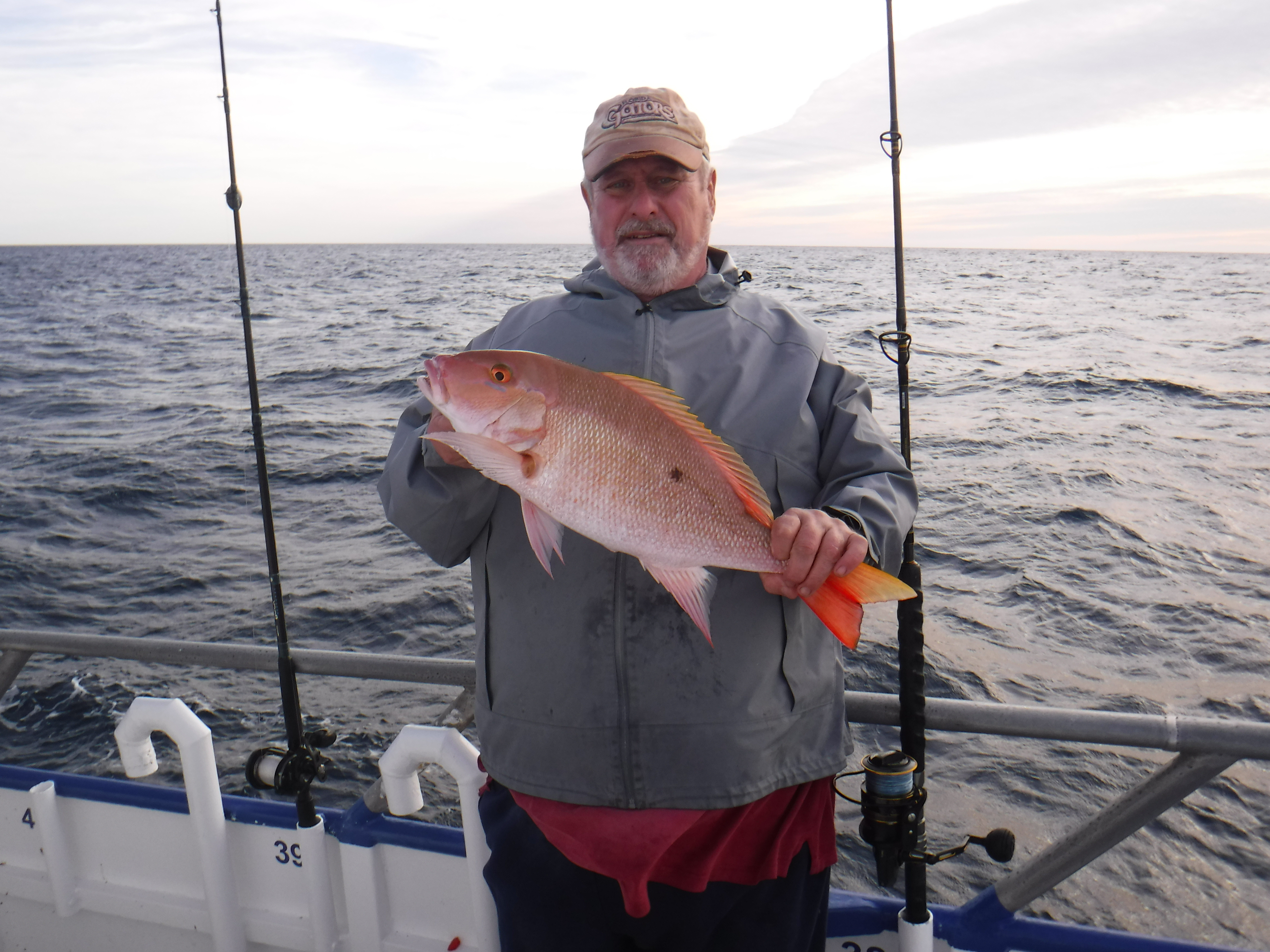 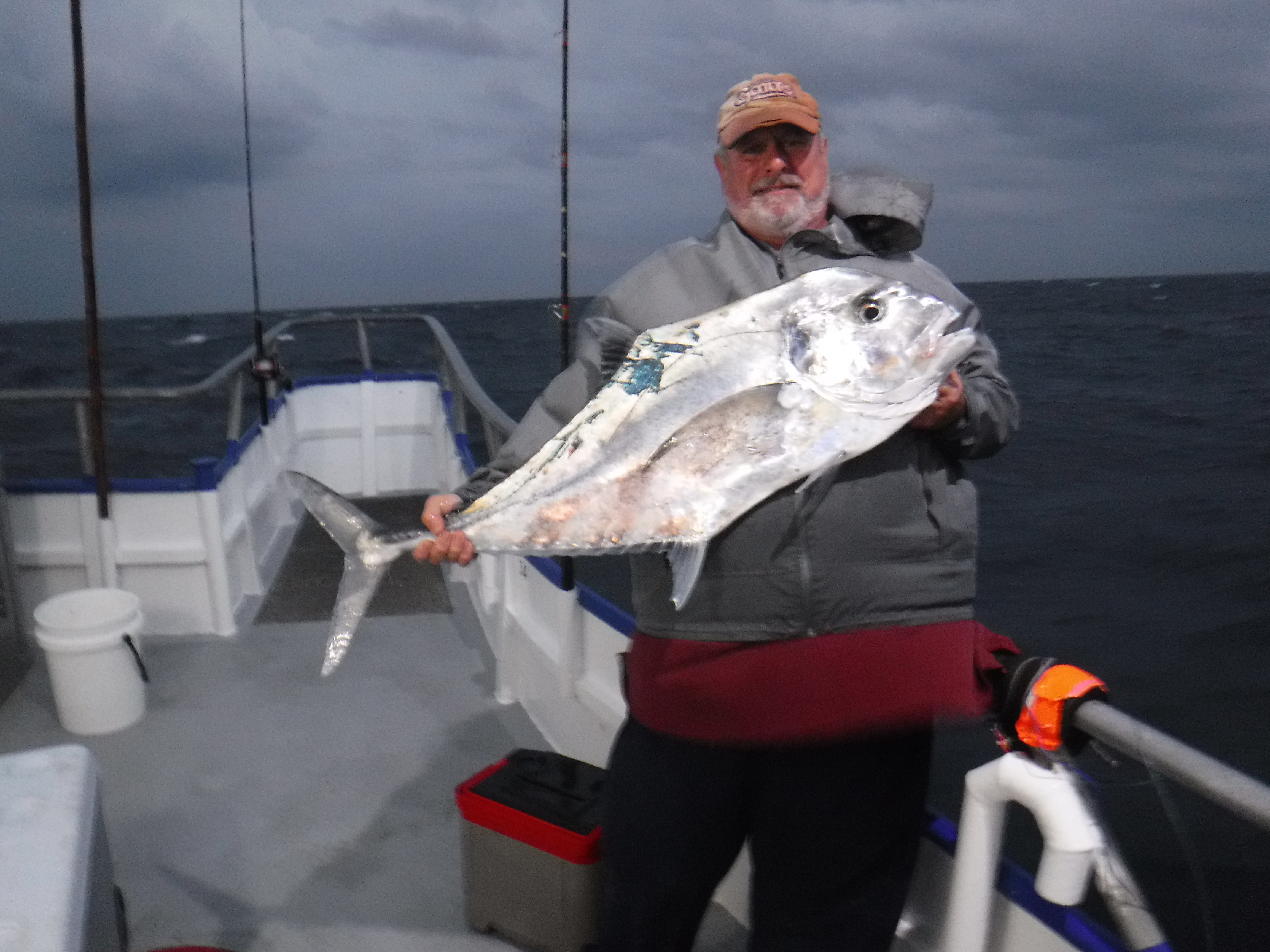