Swapping trebles for in line hooks? 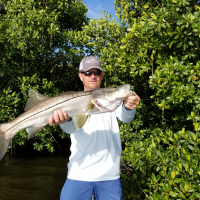 TomR Posts: 12 Greenhorn
January 2019 in General Fishing #1
I fished the Caloosahatchee this past December and caught several beautiful snook over 30 inches. One was 38”. I was thrilled! Some came on shadow raps and others hit crystal minnows. All with treble hooks obviously. My 38 incher wacked a chrome Strike King 8XD crank bait on a deep drop off. That bait has some big trebles on it and it tore the fish up pretty good, but I did land it. Most fish I catch on trebles are released in good shape. So, if I pull the trigger on in line hooks what can I expect? Thanks
0 · Share on TwitterShare on Facebook