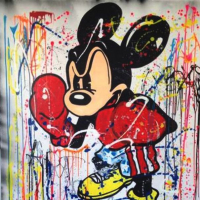 Wally belongs to Joie Henney, host of Joie Henney’s Outdoors, a hunting and fishing show that ran from 1989 until 2000 on ESPN Outdoors, Fox and other outlets.

Henney recently took Wally, on a leash, to the Glatfelter Community Center at the Village at Sprenkle Drive, an assisted-living development north of York, Pennsylvania. Henney told them his gator has never bitten at anyone and is even afraid of cats, the York Daily Record reported.

“I’m not scared of snakes,” one woman said as she cautiously approached to have her picture taken with Wally, “but that thing has a lot of teeth.”

Wally may not be as soft and cuddly as support dogs, but Henney encouraged her to pet Wally, saying he particularly likes the top of his head rubbed.

“He’s just like a dog,” Henney told her. “He wants to be loved and petted.”

Henney says he rescued Wally about three years ago after a friend who rescues alligators in Florida called him up. Wally was part of a congregation of gators that were to be destroyed to make room for a development.

Wally was just a pup, about 14 months old and about a foot and a half long. At first, he was afraid of everything. But after a few months, Wally had begun to become domesticated.

“He was a like a little puppy dog,” Henney said. “He would follow us around the house.”

Henney said Wally is still a wild animal and you still have to be careful around him. But he became a part of the household.

Wally, who shares his home with another gator, Scrappy, lives in a 300-gallon pond Henney built in his living room. He loves to watch TV and lay down on the couch or bed. His diet includes frozen rats and chicken.

“They aren’t for everyone,”Henney said. “But what can I say. I’m not normal.”