Tuesday morning, 12/4/18, just ahead of a cold front due to arrive in the afternoon, I fished 20 miles west of New Pass with Ralph Marino, Bud Mulchy, and their friends, Ed and John. The guys used squid and cut-bait to catch six keeper lane snapper, two bluefish to 20 inches, twenty-six grunts, a triggerfish, and six red grouper shorts. They boxed the lanes and the grunts, and released the rest.

Long-time customers, Erwin and Millie Matusiak, fished southern Estero Bay with me on a chilly, windy Wednesday morning, 12/5. They used live shrimp to catch eight sheepshead to 14 inches, including five keepers, and they released two redfish shorts and a crevalle jack.

Rich and Marnie Henke and their two sons, Anthony and Lucas, fished southern Estero Bay’s backwaters with me on Monday, 12/10. The family used live shrimp to catch two redfish, 18 inches and 20 inches, which would have been keepers if not for the current moratorium on harvesting reds. So we released those, along with an 18-inch snook, one mangrove snapper short, and two crevalle jacks. Sheepshead action was steady, and the family caught ten of those, including two keepers at 14 inches and 15 inches.

Long-time and frequent customer, Mike Connealy had hoped to fish offshore on Wednesday, 12/12, but seas were four foot, even near-shore, so we opted for the backwaters instead. Mike used live shrimp to catch twenty sheepshead, including three keepers measuring 14 to 16 inches. He also caught and released a crevalle jack and two puffer fish.

Between a couple days off for the holidays and a whole bunch of very gusty winds and rough seas, there wasn’t another opportunity to get out fishing until Wednesday, 12/26. Even on that day, there were high winds and seas, so the Ketchum family—Steve and Mary and their sons, Connor and Cameron-- changed their offshore fishing plans to inshore fishing instead. Using live shrimp on a catch-and-release trip in southern Estero Bay’s backwaters, the family released ten sheepshead to 14 inches, three redfish shorts, three small snook, and two crevalle jacks.

Seas were still rough on Thursday, 12/27, so Ian McKinnon and his young grandsons, along with a few other family members, fished inshore instead of fishing offshore as they had planned. The group used live shrimp in southern Estero Bay to catch and release two redfish shorts to 18 inches, a 15-inch snook, four crevalle jacks, and four sheepshead to 11 inches.

Winds kept blowing hard overnight and into Friday, so I fished the backwaters of southern Estero Bay again on Friday, 12/28, this time with Frank Fanta and family and friends. The group of four used live shrimp to catch two keeper sheepshead at 14 inches and 16 inches, and they released sheep shorts, a 17-inch black drum, a 17-inch redfish, and ten crevalle jacks.

I finally got offshore on Saturday morning, 12/29, but the bite was slow, even at some of my most productive snapper holes. Wojciech Lewndowski and five of his buddies fished in several spots out to 25 miles west of New Pass, using squid and cut-bait. The guys did box twenty grunts and a keeper-sized lane snapper to take home for meals, but the only other catches were ten red grouper shorts, which we released. The other boats around us seemed to be having no better luck. Perhaps the recent winds and rough seas had the gulf stirred up. In any case, we were glad to get some fish in the cooler, but we’d have liked some better action.

The first trip of the New Year was an offshore one on Wednesday, 1/2/19, with Brian and Tracy Matlock, their young sons, Graham and Iman, and friend John Royer and his young son, Eli. The group used squid and cut bait eighteen miles west of New Pass to catch three mangrove snapper, including one keeper at 15 inches. They added ten good-sized grunts to the fish box, and they released five red grouper shorts, a 14-inch mutton snapper short, and a 17-inch bluefish.

I fished 18 to 23 miles offshore from New Pass with long-time, seasonal customer Ron Musick, for his first trip of the season on Thursday morning, 1/3. Fishing was still a bit slow, but we boxed a dozen grunts and released a half-dozen red grouper shorts, all of which bit on squid.

The photo shown is of Barry Cermak with a 20-inch porgy, caught on squid on a recent offshore Fishbuster Charter. 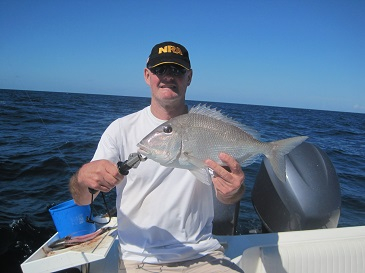 You can view our fishing action videos at http://fishbustercharters.com/fishing videos.html