Mullet ModeratorPosts: 2,432 Moderator
December 2018 in Northwest General Fishing & The Outdoors #1
As my last post denoted, I've been shooting a lot more deer, but with my camera. The reason? My 2 boys have decided they want to hunt. My youngest, Matt, is 29 and has killed a few deer. Billy my oldest shot his 1st last year at 33.  Matt has never "hunted" per se but he has killed a good bit. I've always been in the stand with him and I was with Billy last year. I take most of the blame for the situation as I was still a kid when Billy was born(20) and was too busy playing to worry about the boys. Their mom raised them when they were young and I truly regret it.  That being said I'm doing my best to at least teach them some things I should have taught them many years ago. So I decided they need there own gun. They have always just shot mine in the past. I just happened to have a 243 I bought from someone at sometime. Brand new Winchester with the tags still on it. I think it was built in the 70s. I helped my oldest pick out a scope, which he purchased. He and I loaded some cartridges and took it to the range and sited it in.  Now they have their own gun.
I've been "scouting" all season. Making sure I know where and when our best chances will be. The weather was right Tuesday and I asked my oldest if he wanted to slip out and go. It was his day off (he's a pharmacist). I left it totally up to him as I didn't want him to feel pressured as I have pressured them in the past to do things I wanted to do, rather than what we wanted to do.  He said sure and actually  pushed me to go as I was not that fired up about it.
We got to the tower and started watching for deer, in between looking at our smart phones. I was hoping with the weather the deer would move early. It was really wet from the recent rain and we were gonna have a LONG drag to the truck. We saw a few deer at the far end away from the truck and decided to be patient.  A young doe came through the cotton field and got a pass.  Pretty close to the end of legal shooting light a large doe entered the field. He couldn't see her, but I could. I told him to be patient as she would be in his view soon.  She came into view. I told him "it's your call". It was late and we'd have a 400 yard drag I reminded him.  He drew down on her twice and raised up from the scope, trying to slow his heart rate. I could here his breathing. I smiled a bit as that's the one thing I really miss these days about hunting. I guess you just lose that after so many. He drew down the 3rd time, patiently controlled his pull and... POP-BOOM! It was a solid hit. She donkey kicked and stumbled behind an "island" in the field and out of site. I knew she hadn't went far.
We went to the truck and dumped our gear and coats as I knew we wouldn't be cold shortly.  I stood there holding my gun, "I should take it just in case" I said. I decided against it as I knew the shot was good and I didn't want to deal with it during the long drag.  We went to the spot and against my normal process of locating blood I simply walked into the wood edge. She hadn't went 50 yards. It was a good, humane harvest. I used an old safety harness as a drag and we had her to the truck after Many, many stops to rest. It really wasn't as bad as I expected. Dropped her at the processor and headed home.  It was a great evening. Fellowship and a clean harvest that we'll be able to remember every time we sit down to enjoy the venison.
Now to get "Matty" my youngest  on the board when he's here for Christmas.
On another note, I'm so happy I got my butt into shape 8 years ago and I'm able to enjoy these times with my boys. I can still be the leader and not a burden when we're in the field. Thanks CrossFit.
Lastly, I'm not the killer I once was.  There was a time when I wanted to kill every deer I saw. It was blood lust no doubt. I wrote it off as the genetic drive we are born with but I think ego came into play as well. I did love the kill. I think the paradigm shifted for me when I lost my father. It broke me(as I tear up even now). As I cried in bed my wife actually said "it's good to see that you actually have emotions".  She meant it in a good way I know.  I value life. All life. Maybe getting older and more intimate with my mortality is a factor as well.  Most times now before I pull the trigger, or let fly the arrow, I've had a little pep talk of logic with myself. Reminding myself that I'm a meat eater, that it's not reality to let someone else do your dirty work. Oddly enough Pontius pilot always come to mind.  You can't wash your hands of the killing and then sit down at the table.  Ok, you can, but you shouldn't.
I'm proud that my boys have that appreciation for life way earlier that I did 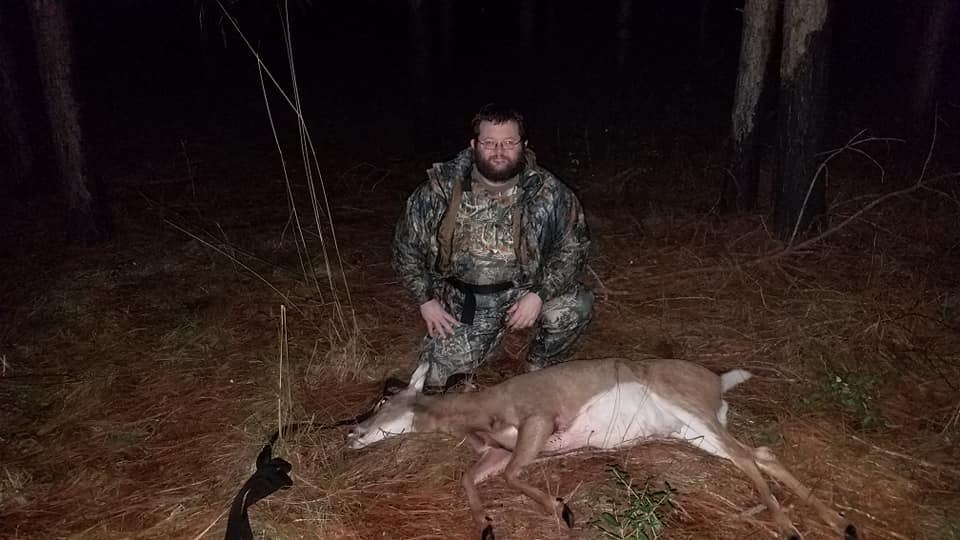 . I'm sure it came from their mother.
Anyway I've rambled enough. Next step is to actually teach them to hunt.
They have the killing part down.
4 · Share on TwitterShare on Facebook