grey2112 Posts: 368 Deckhand
November 2018 edited November 2018 in West Central General Fishing & The Outdoors #1
Went out Sunday 11/25 due west of NPR.  Couldn't have picked a better day between fronts.  Leaving from Nick's Park at 0745 at LOW tide (lowest I've ever seen it there) was a great idea.  Despite some nagging O2 sensor problems from my Honda, we made it out to 45 fsw pretty quickly, though wetly (I really need to get Eisenglass).
Viz all day was a little snotty  but not as bad as it was earlier.  Some top-to-bottom hazy, good 20-30 foot horizontal.  Temp was a consistent 71.
Pretty fishy in all depths from 40-50 feet.  A bit sharky, as at one point I had 3 of them circling me and one got close (I poked him and hit).  A few goliaths.  Good mangos, hogs, and a few gags.
The highlight of the dive - no kidding, but the BIGGEST darn stingray I've ever encountered, and 3 other divers with me were of the same opinion.  When my brother (known for the occasional exuberant embellishment) came up and told me how huge this ray was, I took it with a few pounds of sea salt.  But when I went down on the spot with another diver and we saw it ourselves, I was flabbergasted.
At LEAST 6 foot wingspan, and a good 10+ feet total length to tail tip.  It literally made my jaw drop and almost caused a drowning.  Impressive to say the least.
[url] 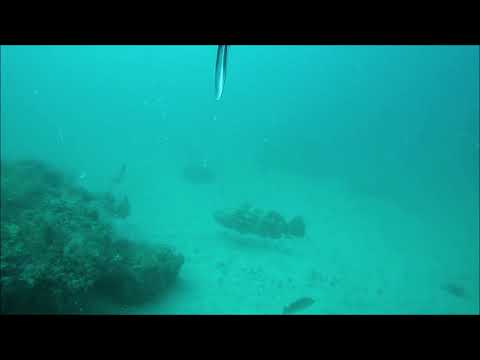