CaptainBly Posts: 2,653 Captain
November 2018 in West Central General Fishing & The Outdoors #1
A buddy of mine in the coast guard just got stationed in the bahamas.  Being the great guy he is, he promptly bought a 32' regulator and I decided that was reason enough to take a trip.

That tropical disturbance was trying to play havoc with my trip but I was undaunted....  Ok, flights were booked, hotel was paid for, I was going regardless...

Arrive on Saturday and it is blowing pretty hard so we just decide to do a booze cruise.  The coast guard has put him up in a SWEET 3 story townhouse with his own dock so just walk out the back door.  He is just a couple miles down the beach from the Baha Mar and a couple more miles to Atlantis as a point of reference.

So, we booze cruise around and he says, I got this water in gas warning.  I say, uh, that ain't good dude...  Probably something we should resolve sooner than later.  He could be, lets just say, mechanically challenged.  So I show him the gas cup on the engine and where that sensor is and say there is water in there and we need to unscrew that and get it out.  Also need to find your water separators and check those.

Fortunately he had racors with the nice little clear cup at the bottom.  Sure enough the port engine racor has about 6 oz of water in it.  Show him how to empty those so he knows what to do going forward and then start to take the cup on the engine off.  Whoever last changed that tightened them down big time.  Of course we don't have the little wrench so are using channel locks.  I tried it and said, dude, I am going to let you do this because I don't want to pop a hole in this thing.  So, I hold the frame and he applies the pressure and it comes lose.  Sweet.  Dump it out, sure enough, lots of water, put it all back together and we are good to go.

Head to the hotel for the night.  Get up early on Sunday and head to the boat.  We stop at a little store for ice.  I come back out and he says the motor stalled.  We never pumped the racor back full so no problem but then I see gas on the surface of the water.  Not good....

Long story not so short, sure as shizzit he squeezed the cup too hard with the pliers and it popped through and was leaking.  Trip over...  Head back to the dock and lets figure out what we are going to do. Run around the island.  No suzuki dealers, nobody open on a sunday, we are crap out of luck.  So what do you do in desperate times?  GOOGLE of course.  Some redneck has a youtube video about fixing a plastic gas tank with super glue and baking soda of all things.  What the heck do we have to lose?   Well what do you know, it worked.  Not a permanent solution but we are back on the water.

Ok.  all that rambling for this...  We troll for an hour or so and the magic sound of a wahoo hitting the lure and stripping off about 200 or so yards of line.  Chinese fire drill time. Get the other rods out of the water.  I grab the rod and in reasonably short order up comes this fella.... 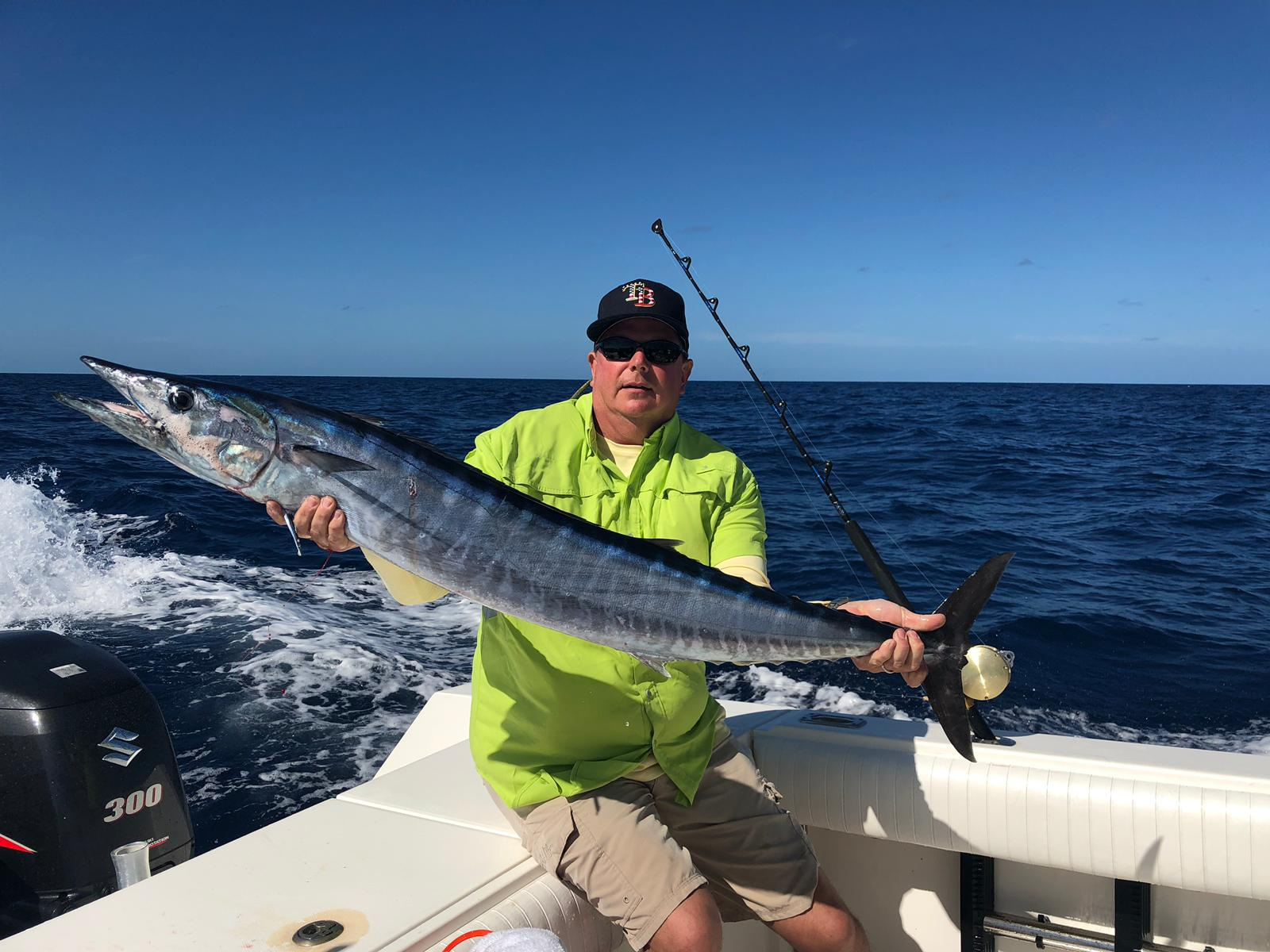 Ok.  At least now I know what the heck we are doing.  Circle back through that spot and no more hits.  Getting a little late so start trolling back.  About 30 minutes later ZZZZZZZZZZZZZZZ   of the drag again.  Get him boat side and leadered him but he took a last minute run and shook off.  Ok, rookie mistake on our parts but not bad.  Put back out and another line goes out.  Nice 10-15 lb mahi.  Circle around, the flat line gets firm, assuming another mahi but it spit the hook.  Then the deep line goes off again...  Our 3rd hoo of the trip.  Much smaller, maybe 10 pounds.

2 for 3 on the hoos. A nice mahi.  First time doing this for me and probably only the 5th or 6th trip for him so not bad.  Heading back out in a couple hours so hopefully will add some pictures.

Tight lines and hope everyone has a happy and safe thanksgiving.