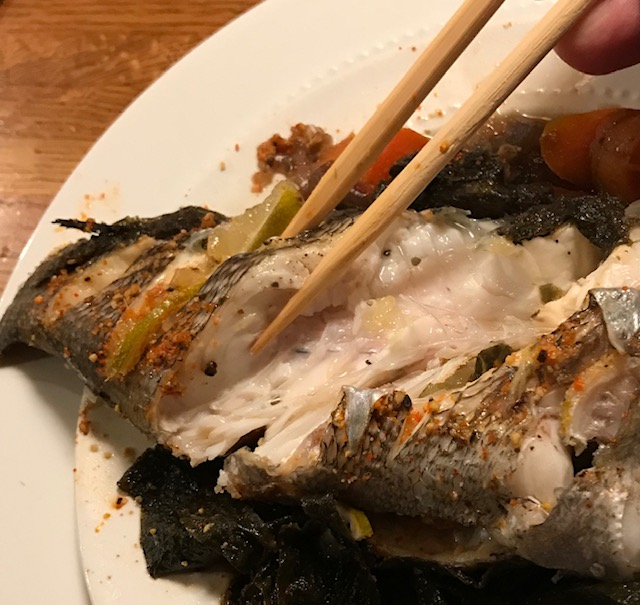 I tried this recently with a Black Seabass, (but this recipe would work great with a Grouper or any small whole fish) which have been schooled up on the artificial reefs up here in NJ. The limit is 10 fish per man and we have had several days where 5 of us on the boat limited out...so, I've been trying different recipes for variety and this one was particularly good...

As usual, the fish was treated like FOOD from the moment it came off the hook and was bled and iced properly on the boat. At the dock, the fish was scaled, all the fins clipped off with shears and the guts and gills removed but with the head left on. (the cheek meat is the best part of this dish)

Back in the kitchen the fish was inspected closely, a few missed scales were removed, and the Fish's cavity was scrubbed clean of all blood traces. The fish was dried with paper towels, then wrapped with clean paper towels and then over-wrapped with aluminum foil. The wrapped fish was placed back in the fridge and left there for two days to develop umami.

To make the steaming broth, I chopped and sauteed a half red onion and a carrot in olive oil, then added a quarter pot-full of water after the onion had browned. Cranked the heat up to high and brought the pot up to a rolling boil.
Added several splashes  of soy sauce, a tablespoon of HonDashi, several shakes of Togarashi powder and a thinly sliced sheet of Nori.
(HonDashi is dried Japanese bonito flake pellets, Togarashi is Japanese chili flake mixture and Nori are dried seaweed sheets...all these ingredients can be bought on Amazon...do a search)

Now the fish was removed from the fridge and unwrapped. Made slits in the side and stuffed them and the cavity with sliced limes and garlic. Sprinkled Togarashi all over then wrapped the entire fish in sheets of Nori.
Placed the fish on a plate and lowered it into the pot with the boiling broth. (the plate was sitting on three rolled up balls of aluminium foil in order to keep it above the level of the liquid and in the steam)
Steamed the fish for 10 minutes, removed it from the pot, unwrapped the Nori around it and DUG IN!
MAN, was it good! SO full of flavor. And after enjoying the Fish, enjoyed the Broth as well, which was delicious with a flavor very much like the Japanese Miso Soup you get at your favorite Sushi spot.
Give it a shot, it is really GOOD EATS!