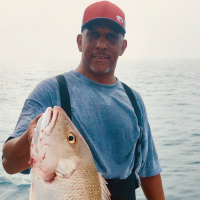 micklej2 Posts: 78 Deckhand
August 2018 in West Central General Fishing & The Outdoors #1
Fishermen, Boaters, and Sun-worshipers,
Capt Ken with Cousins Leif, Kaden, Jonah and Dale and Zach headed out of Anclote to partake in some late afternoon to midnight middle grounds fishing action.  Our goal was to fish the late afternoon to at least the moonrise at 9:30 pm.  The Lange’s bought a ton of chum and two flats of threadfin.  The weather was pretty darn near as perfect as one could hope for during the Florida summer monsoon.  In fact we considering the immediate week before, we were blessed with a window between two periods of typical heavy thunderstorm activity.  If this trip had been two days later or earlier, it would not have happened solely due to a typical overabundance of GOM t-cells.   The first stop was on the inside to bait-up. Leif showed me a different place to catch the pins and that we did.  In fact, either this spot held the nice hand sized pins, or maybe they were just big everywhere that day.  We took about an hour to fill up a 28 gallon live well with frisky baitfish to include grouper pleasing pigfish.
After filing up the live, we headed out 280 W to the grounds.  Enroute, we spotted floating on the surface a barnacle encrusted log about 20+ feet long in 92 feet of water, about 10 miles short of the table top.  We could not make out what type of log it was, whether it was a palm trunk or tropical pine, but we did not care because there were mahi-mahi everywhere, and it pays to be a winner.  There were a few freakishly big bull dolphins but we could not get baits to the big bulls due to all the little bar jacks and chicken dolphin.  If you threw anything in the water, the smaller fish immediately attacked. We loaded up on a limit of mahi.  The fish were coming over so quickly, Dale and I took turns constantly spraying the boat down with raw water, otherwise, the blood and slim on the deck would have been a bloody safety hazard.  After about 10 minutes into the fracas, little Jonah came up to me and said “you fish some.”  That was one of the sweetest and mature words I could have ever heard from an 8th grader.  Jonah for a time took over my roles in slamming mahi in the box and continually spraying the boat down.  Did you know bar jacks will eat bread but a Mahi won’t?  Yes, some of us ate lunch while the mahi madness was going on and I confessed I threw some bread in the water, to see if the mahi cared for it.  Below is a video of the action.  Thank you Dale for also working the wash down
The more I do this, the more I believe it is important for each angler, if possible to have on their belt/person a quality pair of pliers and a venting tool.  Why? Most of us have a tendency to focus on the action instead returning tools to where they were before.  For those that have been out there, we know that the action can get hectic.  Yells for a net or gaff, or large shark sightings, request for pictures, tangles, senior moments and other issues can all easily cause you to forget where you placed your tools.  Then again, most know that good fishing can induce ADD.  They go hand in hand.  So if you get Adult attention deficient disorder, you are in good company.  Also, don't buy or bring the cheap stuff.  The cheap stuff is frustrating. Gear has to work; pliers and scissors need to cut.
Each trip is different and often things do not go as planned or close to what is imagined.  Our goal was to fish the super strong outgoing tide that was going to drain 3.6 feet of water out of the GOM between noon at 8 pm.  We also intentionally planned the long journey out in the heat of the day, which by the way, is a really good thing.  A hot sun and still humid air is more tolerable at 35 MPH….let’s just put it that way.  We did not get to the grounds fishing until a little after 4 pm. The incoming after that was a significantly weaker tide.   After an 82 mile ride, our 1st trip got action:  Big mangs and grouper.   The tide was still outgoing.  I set us up to drift again, but the drift path was off another ~15 degrees.  Still caught fish.  The 3rd drift was another direction, solely dictated on a weak 5 mph breeze.  The tide had ebbed around 6pm.  Lesson learned, the central gulf drains 1st.  The inshore tide charts are delayed in comparison to offshore, which is a known phenomenon, but even more so the farther out you go.
The big pins worked and got results, but often were removed with a single "pop."  Of the 4 gags we took home and two keeper read grouper, all but one were caught on pins.  But we all lost nice gags on threadfins also.  The Gags where 31, 30, 28 and 24.5 inches and the keeper red grouper were 23 and 20.
.
See you on the water,
Capt Cobia Ken
Fair Weather Fisherman 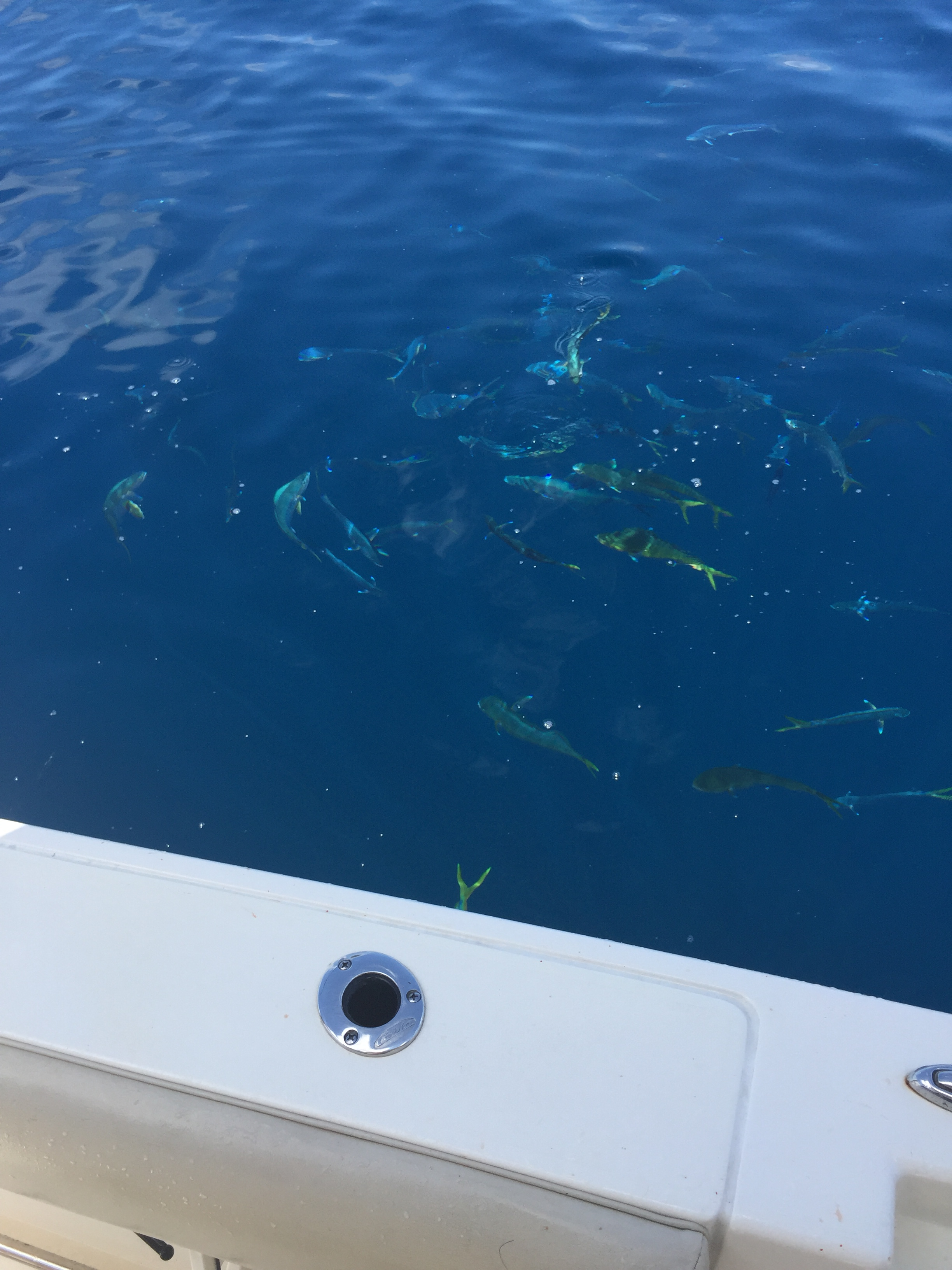 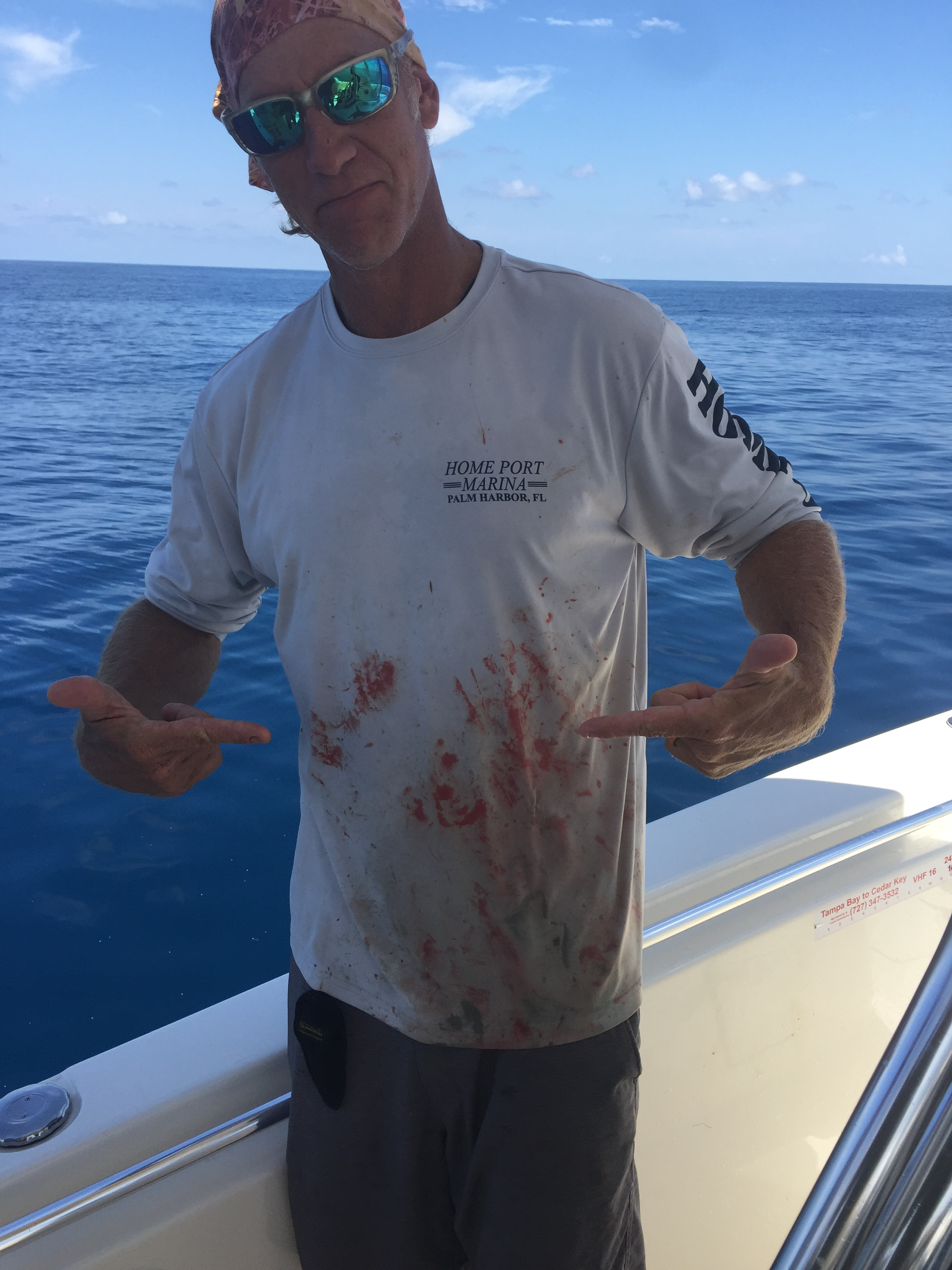 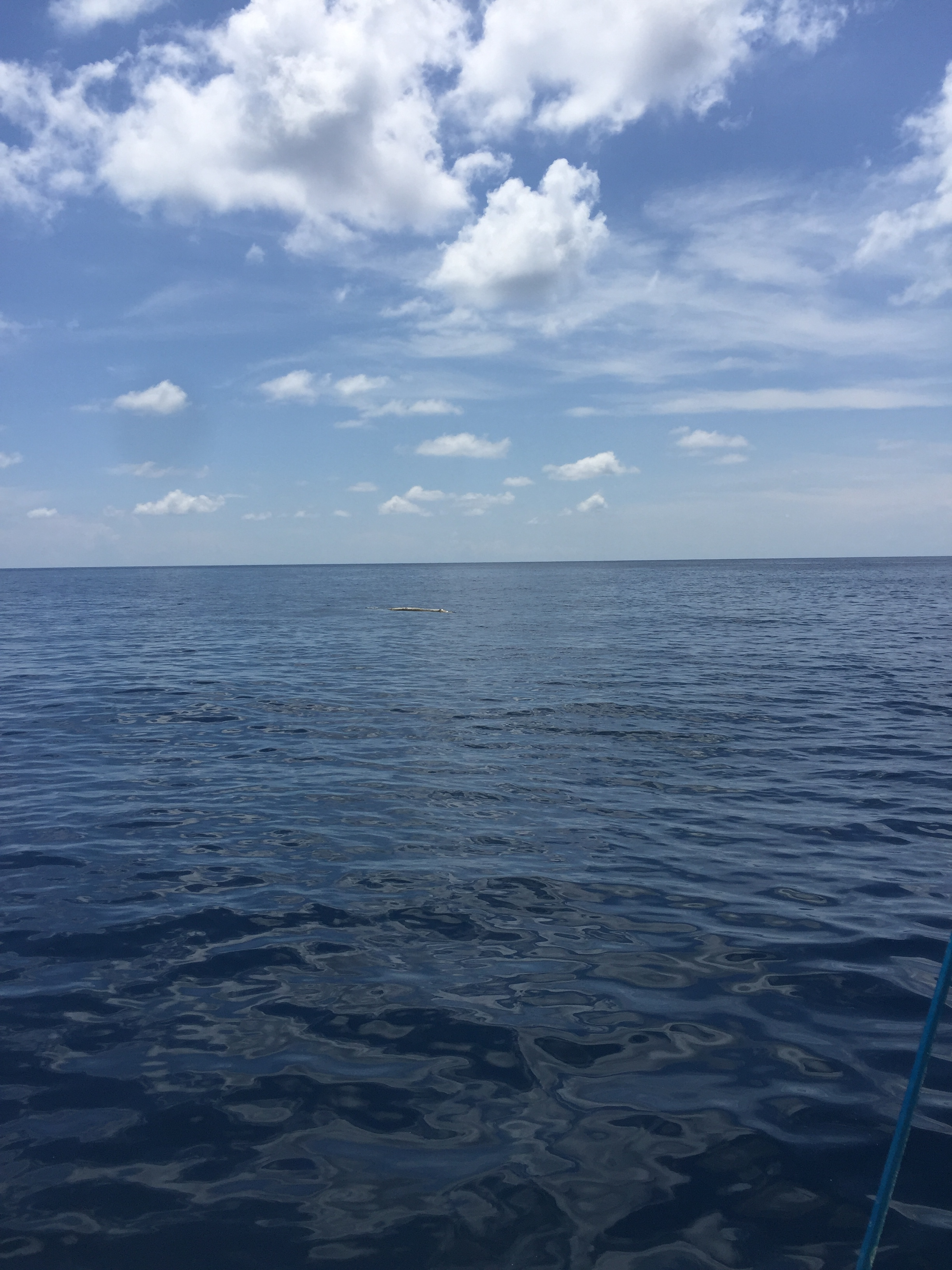 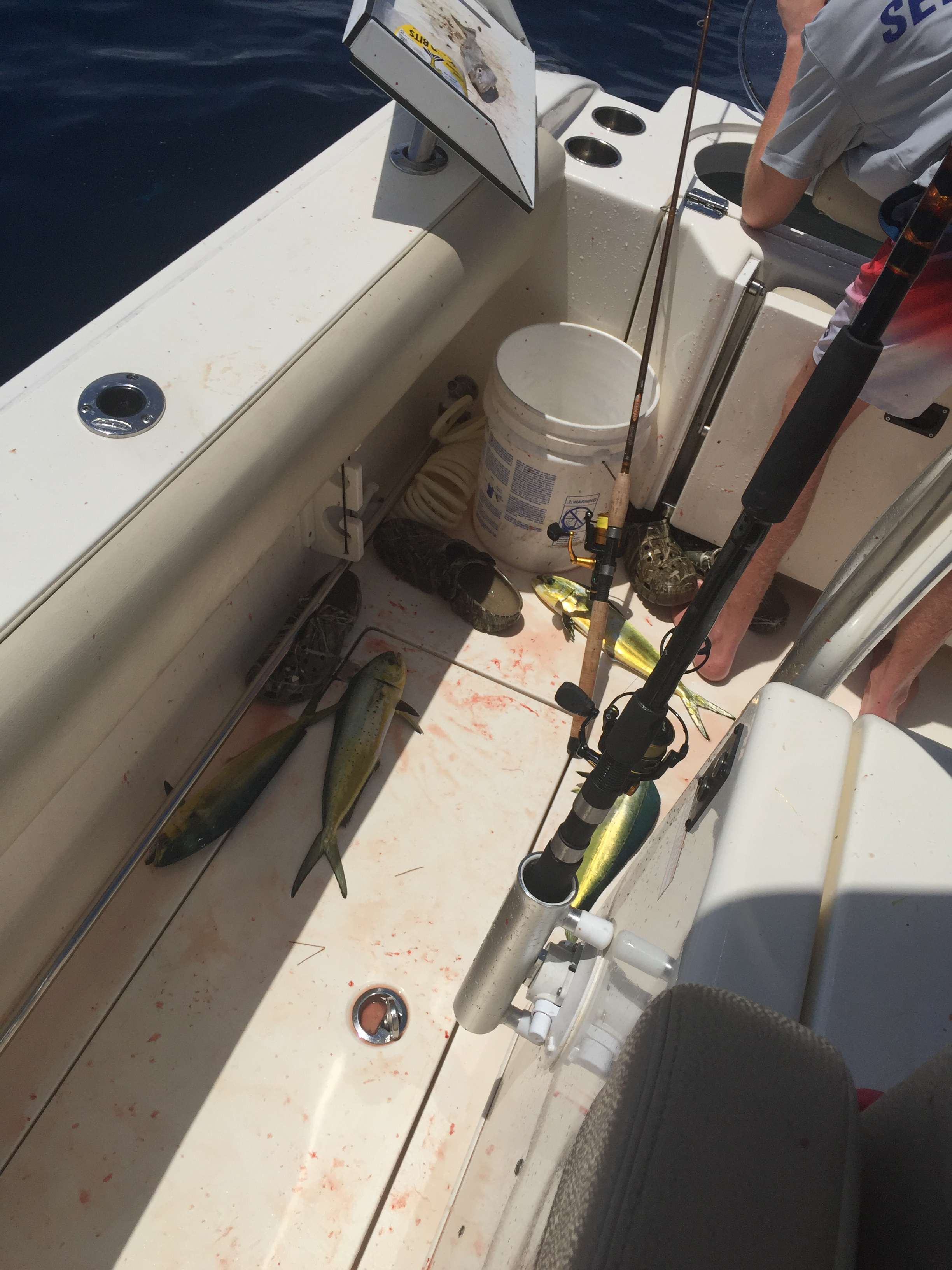 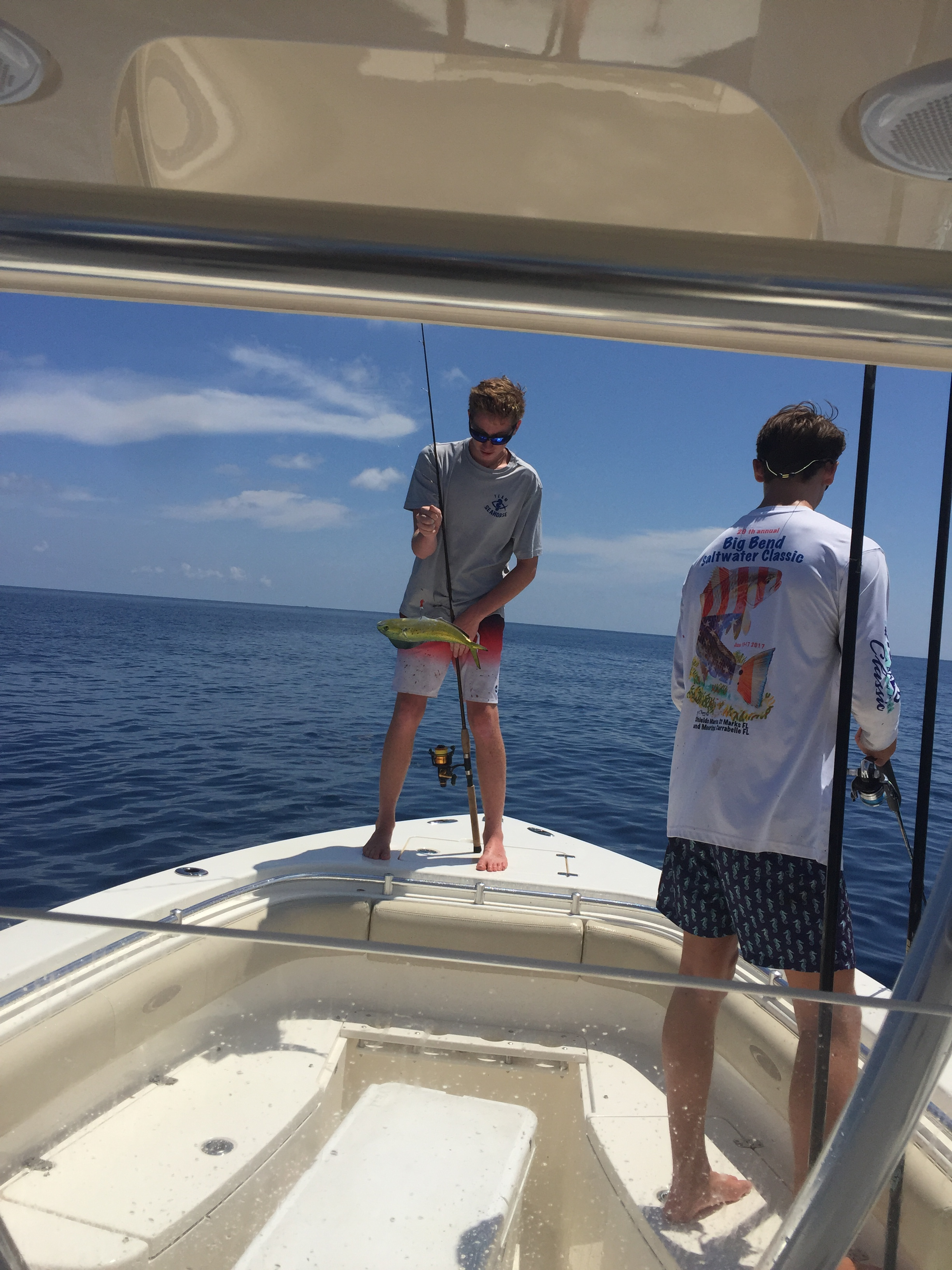