Hobbs28midsouth Posts: 109 Deckhand
July 2018 edited July 2018 in Southwest General Fishing & The Outdoors #1
I arrived on Sanibel Thursday morning and went straight to Turners beach to site fish some big snook. I walked roughly 2 miles down the beach water was clear.  there were a few dead puffer fish and a couple mullet on the beach. I saw zero snook not even dinks. Every other time I have done this I see 100's. The only bait that I saw were small schools of glass minnows and nothing was bothering them. Normally I would have to beat the ladyfish off my jigs so the snook could eat them but I only hooked one lady fish in the 5 days I was down there and that was in Ding Darling.

That evening I went back to turners to try at night but with no luck at all not even a bump.

Friday Morning I walked the beach by the last public parking on captiva. Didnt see one snook and only a few small schools of glass minnows. However there were tarpon everywhere but they were way out there. I saw one small one roll just in casting range but no luck. I then decided to try Bowmans. I saw two dink snook after a couple mile walk and no hits. Very little bait and once again nothing chasing them at all.

Friday night I went to blind pass and caught 2 dinks on the outgoing tide. I saw several dinks caught under the birdge by casting a pinfish and letting it drift down current. I was on the wrong side of the bridge and didnt want to crowd the guy. In the next hour that guy got very popular and by dusk there were 6 people standing shoulder to shoulder over there casting. For about an hour I think they got a hit every cast. There had to have been a couple hundred dink snook blowing up under the bridge. I did not see any larger snook being caught. I kept my spot wating for the tide to change. Slack tide brought everyone to my side of the bridge. First guy came up and promply wizzed his jighead right by my ear. We had a pleasant conversation and he went away for a bit. He them came back and said he was get a cast by the piling literally 5 ft in front on me crossing my line and we had a couple more words and he left again (it was like they had buck fever they had no sense waht so ever). His budddy comes over and picks up my rod I had leaning against the bridge and starts to walk away. I asked him what the hell he was doing and he said something about he thought it was his buddys rod. Then a group of five guys come down from the parking lot and stoud behind me for a bit and decide its to crowded to fish there. They then decide to go up on the bridge and fish the first pilar pretty much cutting off anyone from shore. At that time I decided to leave and try some night beach fishing again. I ran into a nice gentleman who said cut bait was the way to go. He had caught a 39 earlier and caught a couple 34's while I was throwing a jig. I manage to get a 30 on the jig much to his surprise. I turned in about 1am but I had at least caught something that day and I was feeling better about the trip

Saturday morning I hit up Knapp's point with no luck.

Slept in Sunday morning and made the decision that my last night I would use cut bait and that I was going to give it a real chance. I bought 3 frozen mullet and 2 lady fish and went to ding darling to see if I could catch a couple fresh mullet. I managed to wrangle one large mullet. There were some big snook popping in the culverts and I saw one swim out that was pushing 40 inches. I played around with them for a couple hours trying to get them to hit but no luck. I headed to the beach with my cut bait and my saragosa 6000 on a 8ft telemar heavy rod. I also brought a jig rod with a small swim bait. I used the fresh mullet first and used very large chunks of it. It was all the rod had to throw them out. The first cast I had a good fish on but it came off. After about 20 minutes I managed to get this snook 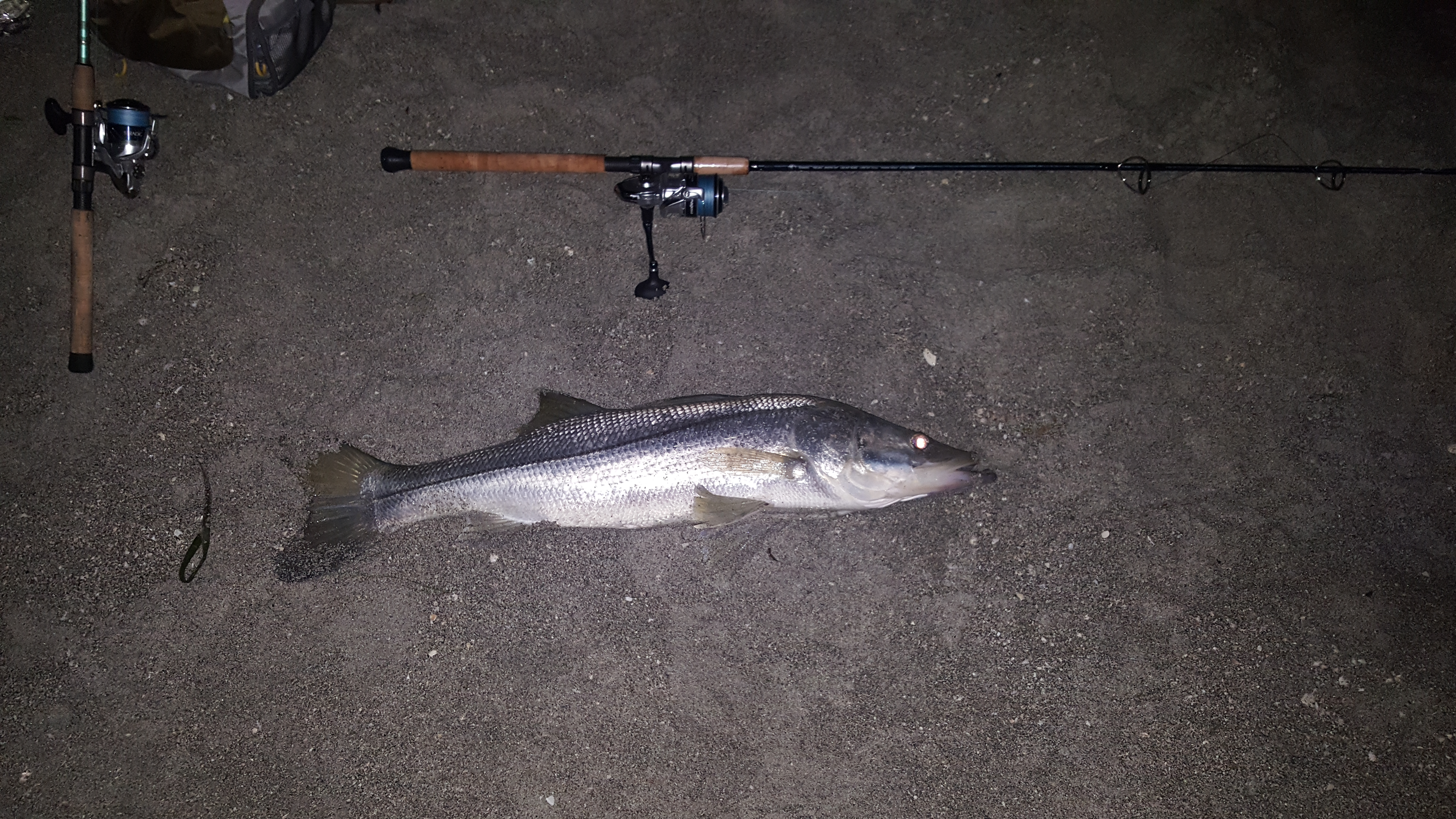 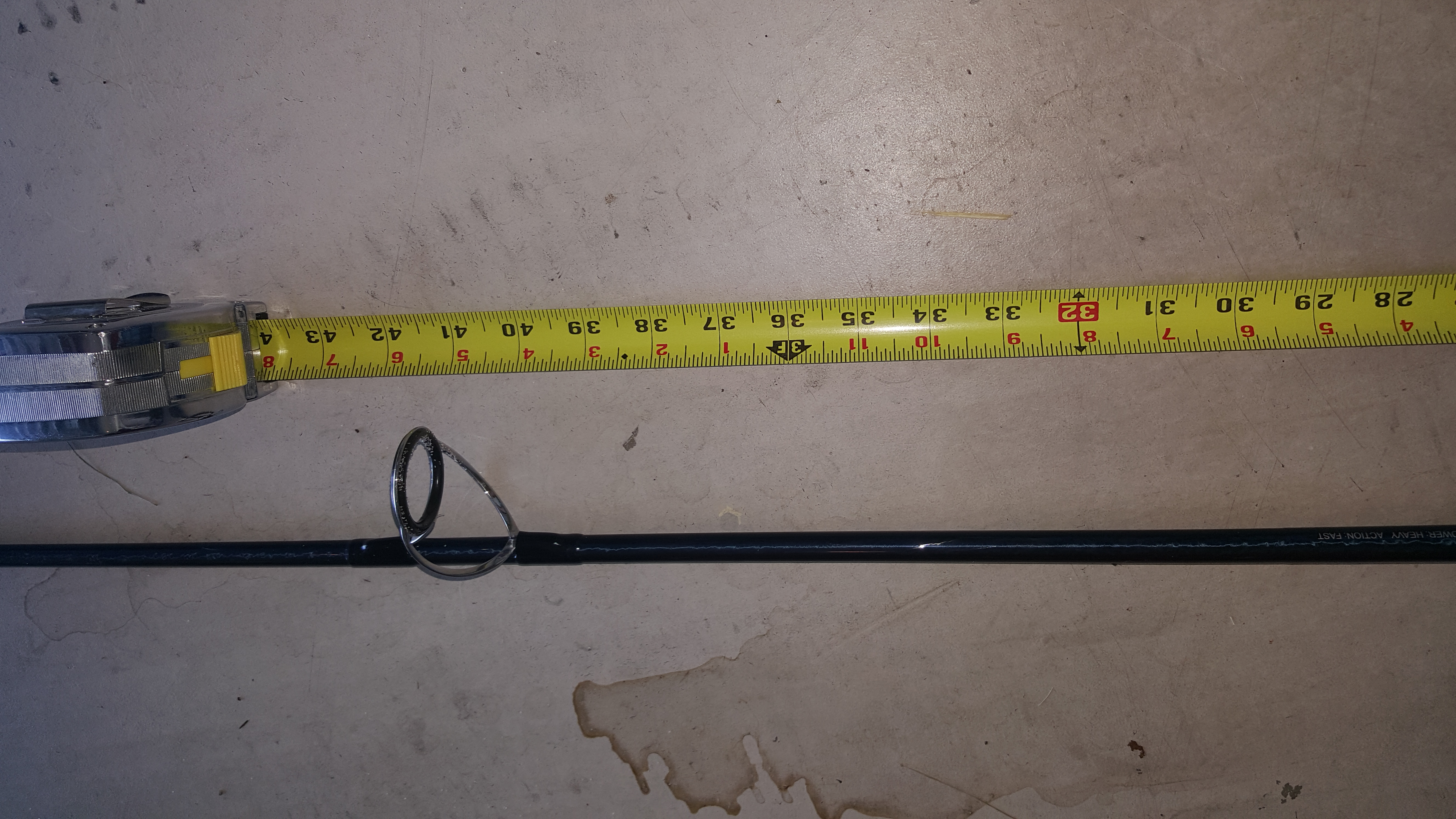 The action was steady with the snook and the noseeums all night. 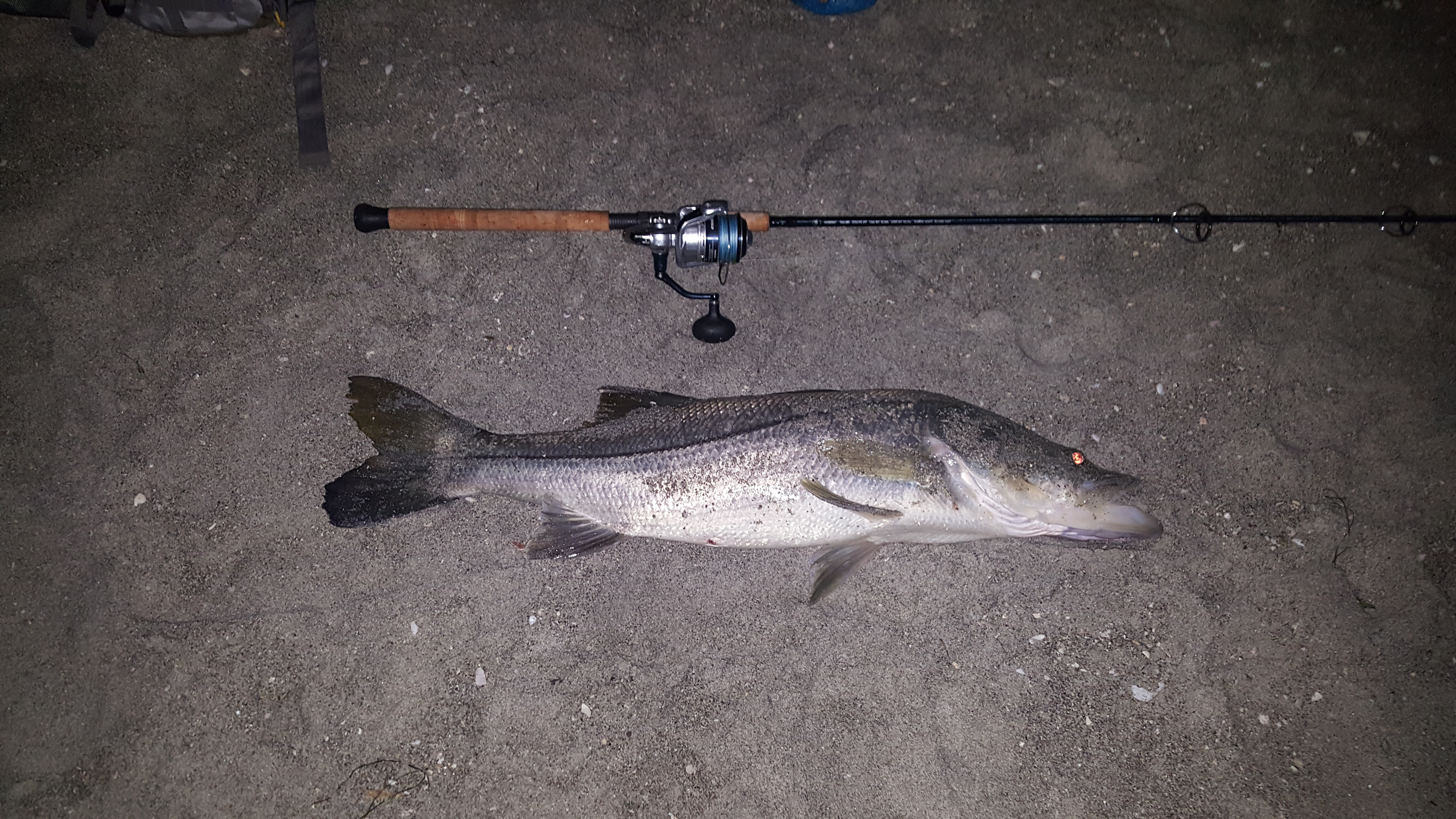 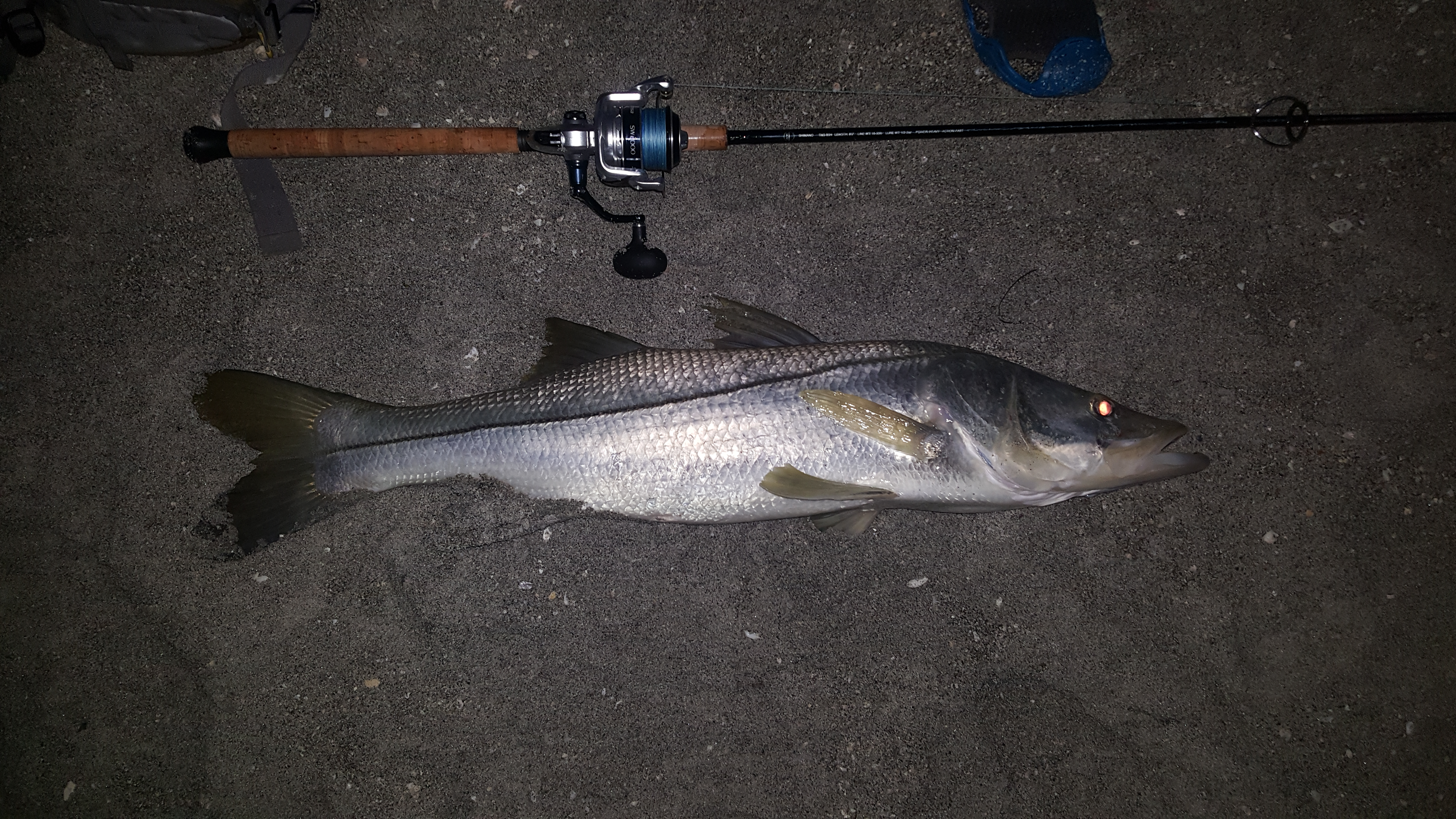 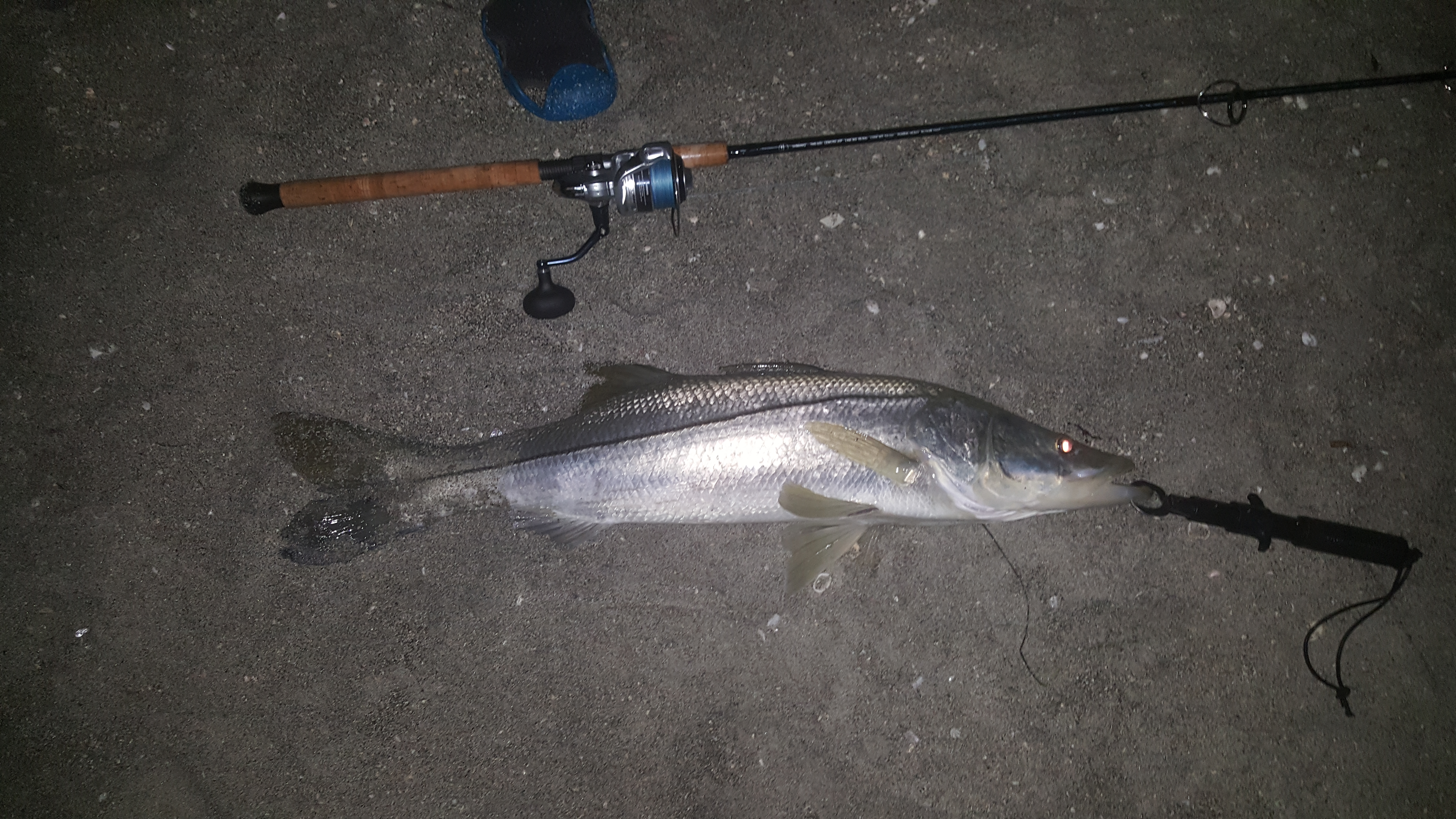 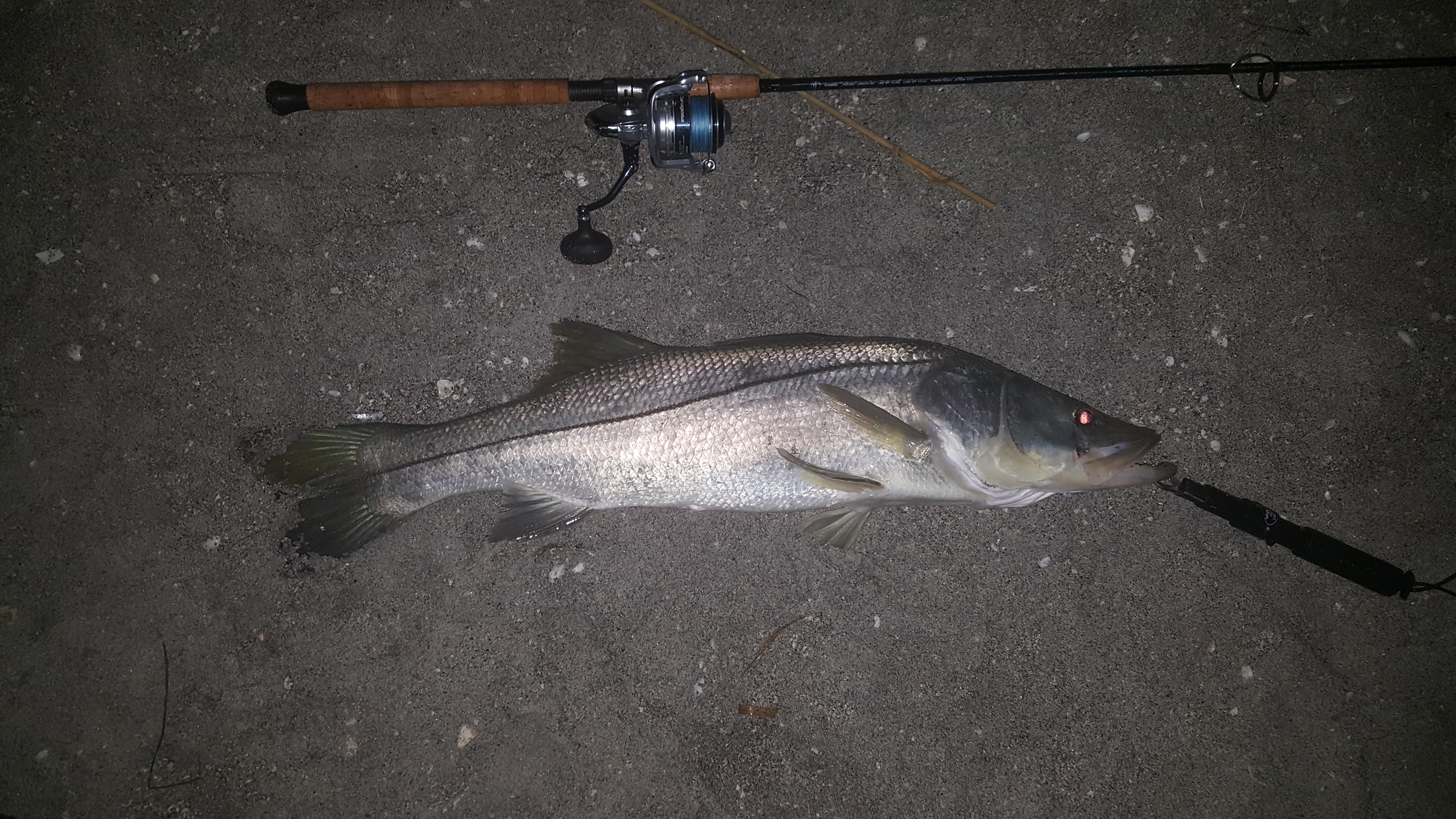 By this time it was arounf 2:15 am and I was ready to call it a night. In between catching the snook above I would move and try to catch one on a jig. I did not get one bite on jigs all night and I tried probably harder than I should have to catch one on a artificial. I had one frozen lady fish left so I decided to throw the whole thing out at once. The Telemar was making some strange noises all night as its only rated for two ounces and some of the cut bait had to be over a pound. I had about 4 last casts with the ladyfish with no luck. I then moved down the beach about 75ft and made the real last cast. It hit the water and as soon as a closed the bail and made sure the braid was tight and in the right spot I felt a big thump. Set the hook and she jumped and made a nice run. She jumped about 3 more times and a couple decent runs and she was done. The rod and reel were over kill for beach snook IMO but in order to cast out the big baits there was nothing I could do about it. I would have loved to have hooked them on the 3000 stradic and most likely wouldnt have land all of them but they didnt like the jigs 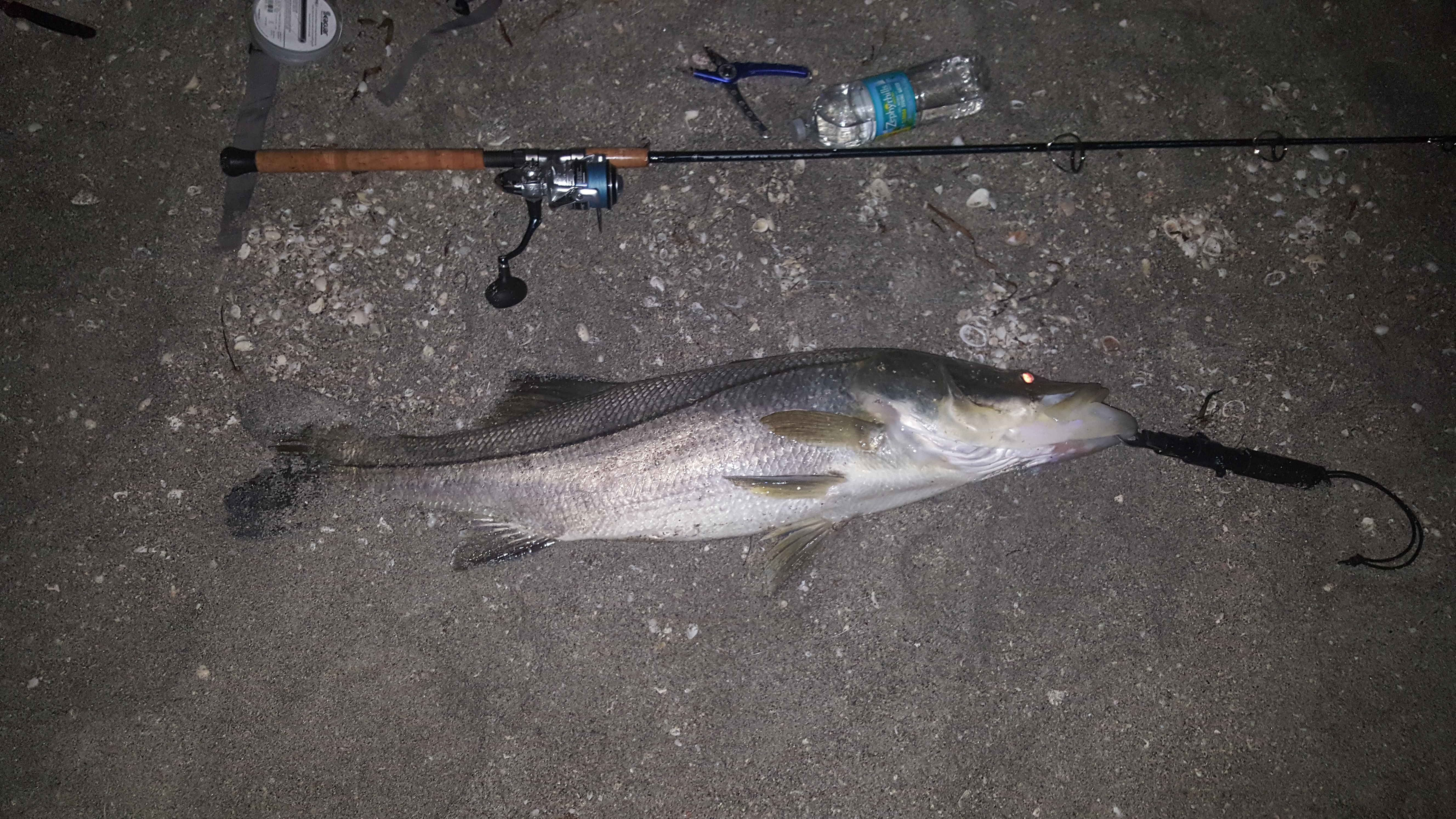 I am calling it a 40. I know the tail isnt at the end of the rod but the head is past the eye that is 41 1/4" so I think its safe to call it a 40. Very thick fish I would have loved to get a better pick but I wanted to get her back in the water so i can catch her next Summer on a jig.

After two weeks of trying to decide wether to go or not go I had a great trip. Thanks to everyone who put up with my messages about conditions and if it was worth going.

Hopefully whatever is going on down there can be fixed and returned to normal beofer to much damage is done.
0 · Share on TwitterShare on Facebook