CaptainBly Posts: 2,349 Captain
May 2018 in West Central General Fishing & The Outdoors #1
I REALLY wanted to go last Saturday.  The first fishable day in a LONG time for a long run.  But momma had different ideas... So, I begrudgingly didn't go and ended up sitting on the beach having lunch looking at calm seas...

This week was different.  Pretty much said if it is calm again, I am going.  Got Mark and Jack on board and off we go.  GORGEOUS day.  It is always nice when you go under the skyway and that big flag at Fort DeSoto isn't standing straight out...  Get to the bayside pier and take a look and didn't see any bait.  Get to the gulf pier and there are 6 boats throwing nets and mostly coming up empty.  Really slow incoming tide.  The bait seemed to be all off the structure but just couldn't get them.  Only got a couple dozen baits and decided it wasn't worth it.  So we headed west down the ships channel checking the markers.  Got to marker 9 and there is literally 10-12 feet solid of bait.  Ok, now we are talking.  I am thinking sardines or cigars and we drop down a zabiki and it was all 5" white baits.  We got probably 50 and headed out.

We got a "TOP SECRET" spot 33 miles'ish out and have normally done very good at.  About 2 miles out and it looks like there is a boat sitting right on it.  I guess our secret ain't so secret any more.  So, rather than be a jerk and drop near them, we head out a little further to some pipe #'s.  Good show, get a few mangos and I got a nice gag that had to go back.  Those are always fun on light tackle.  Oh for June 1...  Oh well.  Some ARS too but fortunately they didn't stick around and become a nuisance.

My buddy Burch finally got out there and his new slick ride has one of them there fancy dancy trolling motors with anchor lock and I am still old school with hardware....  He pushes a button and is right were he needs to be.  The tide had switched a bit and we were off the spot so we pulled anchor and rather than redropping we decided to go look around.  On the fence on that $3000 investment but some days it looks pretty nice....

So we go off towards some of the mitigation sites.  My main # we fish a lot and do well at has a diver sitting on it.  Strike 2...

Go to another area we drifted in December and got some really nice red grouper.  Bite was steady but no keepers.  Was going to head back to my original starting destination to see if it was available but decided to try one more mitigation # I hadn't fished much.  Show was pretty good so we anchored up.

Fishing was pretty good and steady at that spot.  Chumming heavy and had all sorts of species up behind the boat.  We had snapper off the bottom.  I was getting hammered pretty regularly well up in the water column.  Then the flat line goes off.  I had just gotten stuck on the bottom with my rod but hand it to Mark to take care of and grab the flat line.  Fish is staying on the top but was doing some good runs.  Wasn't sure what it was.  Mark freed my line then grabbed his grouper rig he was fishing with and it is snagged up.  Fish coming back towards boat.  Uh, Mark, get it up...  Give me a knife, I will cut it...NO don't cut it...reel down and pull it...blah blah blah...he gets it off the bottom and out of the way.

Mystery fish circles back and is now heading for our marker buoy.  I swear I can feel the line rubbing on the buoy line.  Mark, let out some anchor line...we drift back a bit, fish cooperates and turns again.  Finally get him out of danger and he starts his pinwheel and the gaff is out and in the boat he goes.... 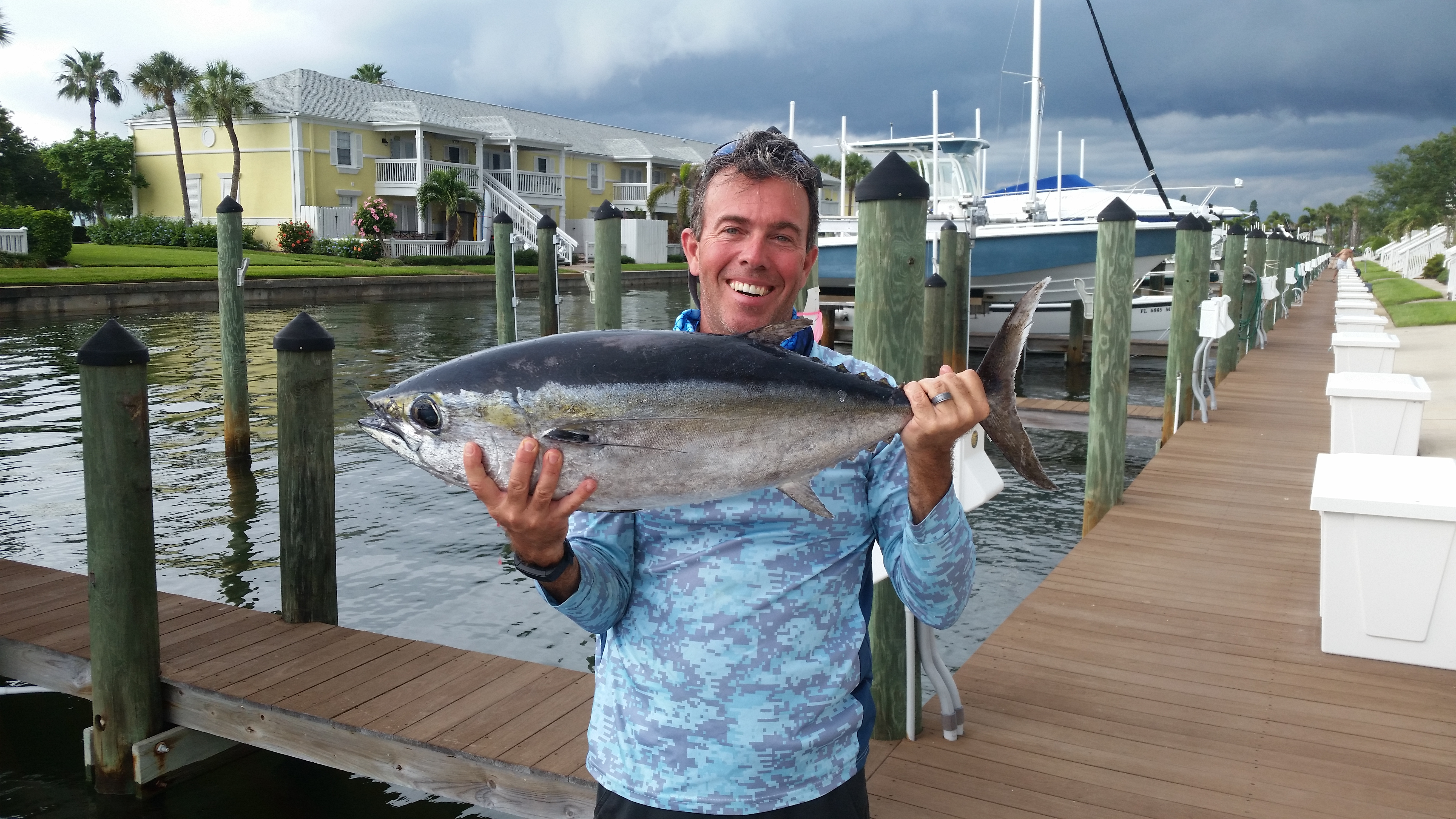 Ok.  Now we have accomplished an objective.  Picked away at the mangos.  Threw back a bunch of keeper but smaller ones and kept this stack including 2 that were 20+, one was probably 22 or 23". 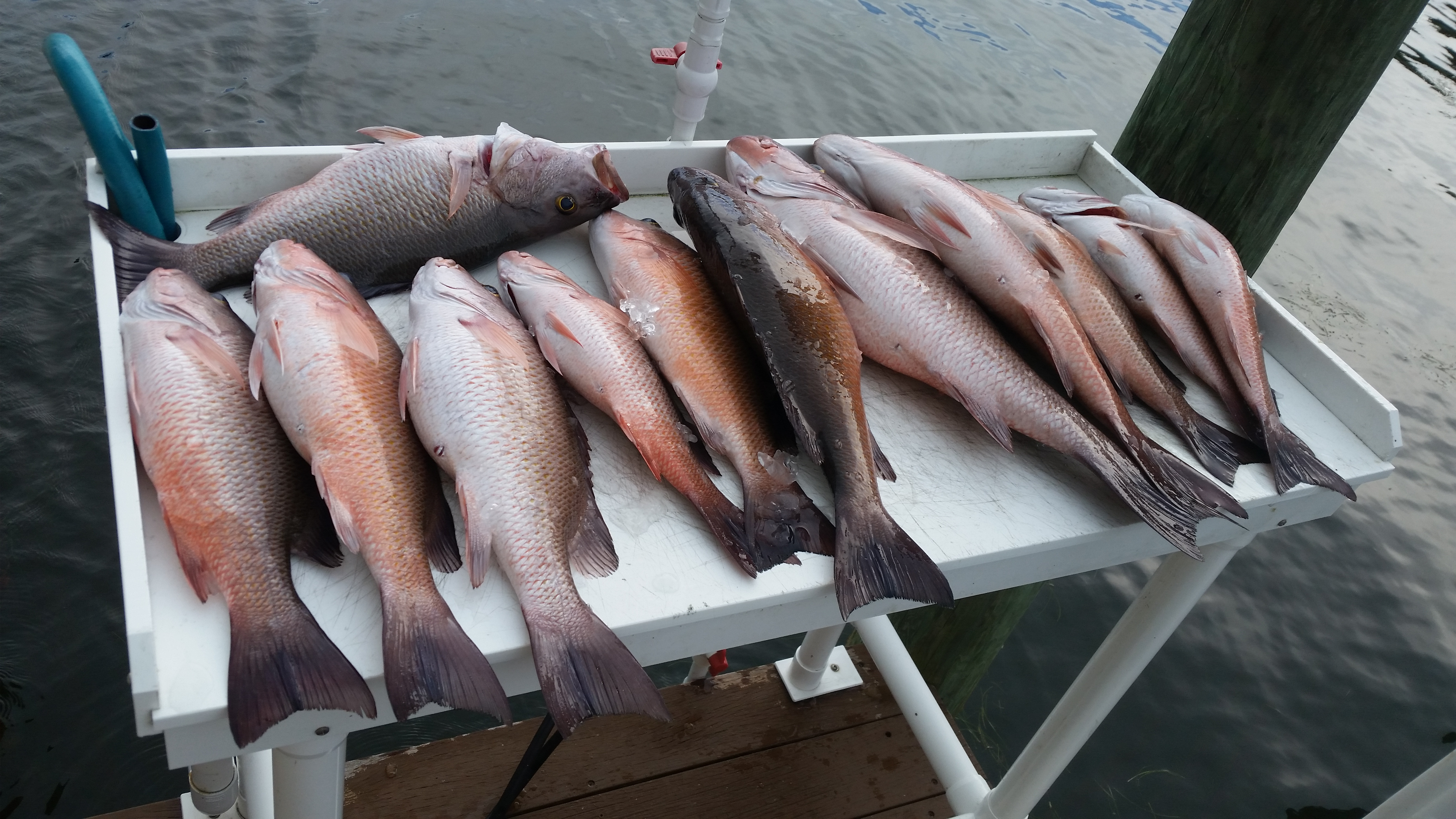 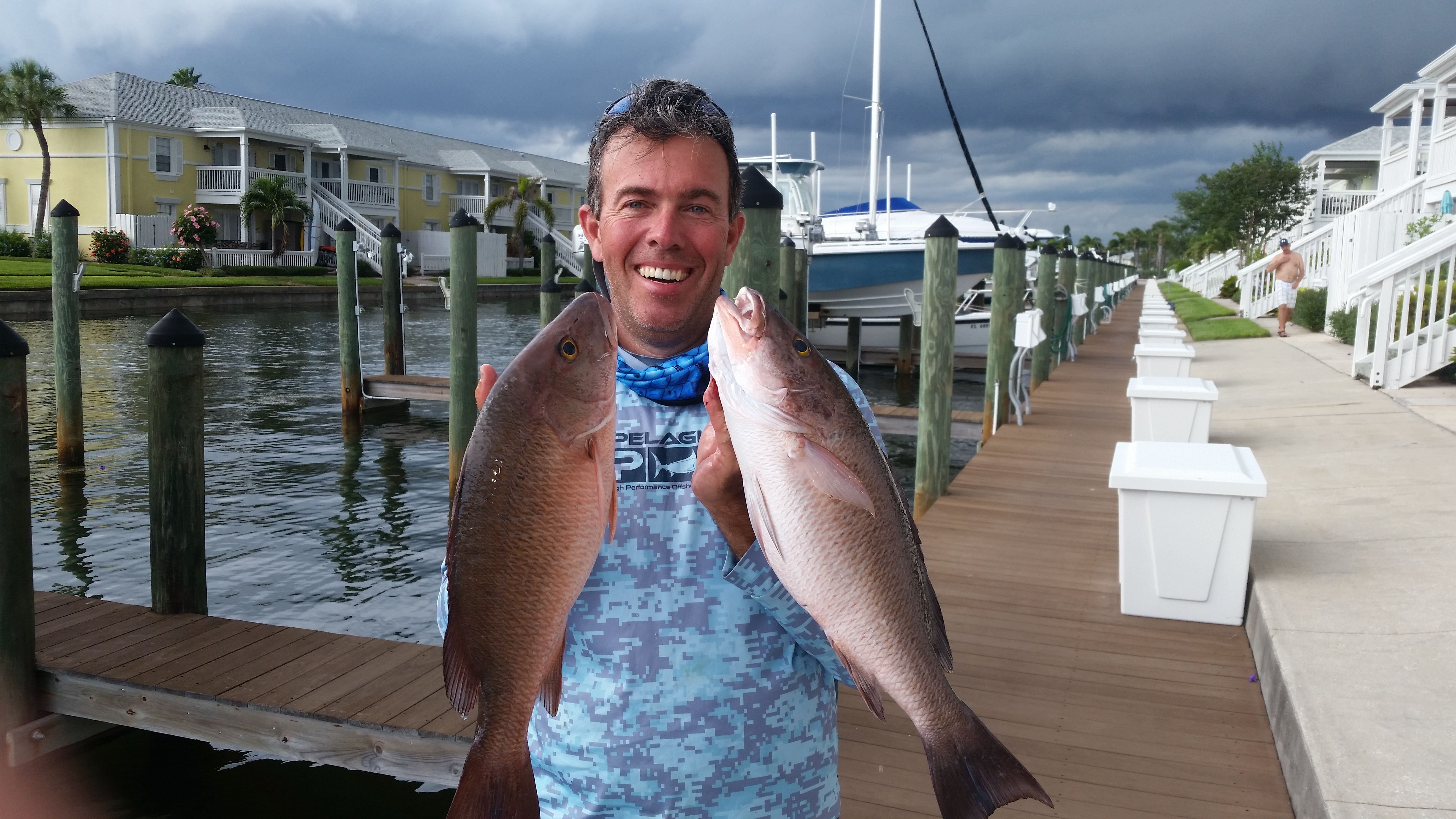 Just a gorgeous day.  Got back to the dock and as you can see, the storms were coming.  Got rained on cleaning fish but all in all, just gorgeous.

33 miles West/NorthWest of Egmont, water temp was around 79 degrees according to my machine most of the day.  Tide was slow to start but picked up and was moving pretty well later in the day.  Mostly running north/northeast.  Depth was right around 100'.

Only fish we caught on live bait was the tuna.  Everything else was caught on frozen, mostly sardines but I had some threadies I caught too.

Caught a few nice triggers too that went back.

Tarpon are next.  Heading to Boca on Friday for 10 days.  Tarpon, gags after the 1st, permit, snappers....should be fun.