Big baits on board all the gear loaded, time to toss the lines and head out for a great weekend of fishing. Trolling on the way out was slower than I expected with most anglers catching more of each other than fish. It got better a couple of hours in as we were in deeper water and some of the anglers had found their bunks. Several nice kings were landed. The highlight of the troll happened right at dusk when an angler I’d helped make lure choices at the dock and showed him A-Z on rigging got slammed. Running the trolling deck can be a bit tedious but it is all worth it to see and hear the joy when I gaffed a large Blackfin that was the first Tuna my new friend had ever caught.

If you’ve been following my reports you know the Mangrove Snapper bite has been slow. I wish I could report it has improved but it hasn’t. I remain optimistic that it will improve. The ones I’ve cleaned still don’t have any roe in them so my hope is once the spawn starts so will the bite. One thing that has been hot is the big Vermilion Snapper bite, they continue to chew and are full of roe so maybe there is a connection.

If the American Red Snapper bite is any indication of what the season is going to be then, this season (starts June 1) promises to be a stellar one. Large ARS came up on virtually every stop during the trip. The bite was so strong I heard one angler say “Perhaps they should switch the rules and let us keep 20 Red Snapper and only 4 Mangos” (Don’t give them any ideas)

The biggest disappointment was the Amber Jack bite or should I say the lack of an AJ bite. After the opening weekend when I got my two fish limit I was certain this trip would be more of the same but the Fish Gods had other plans.  Not only did I not even get a hook up but there was only one keeper landed on the boat. My first thought was we just didn’t get on them but I know Capt. Brian has them dialed in.  On one stop during the day this belief was proven true when the young fisherman next to me reeled up a nice Scamp with two large AJ’s following behind. I dropped a bait right in front of them and they ignored it.  They were there bit just wouldn’t bite.

The most exciting bite of the trip came just before Sunrise when I heard First Mate Will holler Blackfins everywhere get your baits out. Sure enough, Tunas were coming over the rail. I reeled up as quick as I could and put down a big live Pin on a glow in the dark jig head and BANG! BIG FISH ON! I knew instantly I had a nice one on. While I was reeling up I saw several nice Blackfin landed. A few more cranks and it would be my turn. Calling for the gaff and what the*** Turns out it was an extra-large Bonita at least 20 LBS. talk about a fish buzz kill.  Undaunted I tried again and much to my chagrin (and the mates) the same thing happened again.

Over all I had a pretty good trip as I ended up with six nice size Goozers and my limit of large Vermilion as well as multiple fat Porgies and two nice Scamps. I caught more ARS than I can count and three nice Gags all caught and released.

As my reports indicate I often catch and release large fish, primarily ARS and Gags. People often ask me how to vent the fish and how do I know they survive. The best proof that I have they survive is the number of tagged fish I’ve caught. In fact, the gentleman next to me caught and released two Red Snapper that had been tagged on this trip. These had likely been tagged by FWC professional researchers. The good news is with the right tool and minimal training any angler can learn to properly vent fish.

There are multiple videos on the web showing how to do it but I’ll give you a brief overview.  First you need a tool. The ideal tool is a “venting tool” which can be purchased at any tackle store. Essentially it is a large tube or needle with a sharp end for puncturing the fish air bladder. Lay the fish on a flat surface, the bladder is located just behind the pectoral fin. If you run your fingers down from the meat of the fish towards the belly you can feel the bulge of the air in the bladder. Once the bladder is located place the tool at a 45-degree angle. Apply enough pressure to puncture the skin and into the bladder but not so much pressure that you risk doing internal damage.  You should hear the hiss of the escaping air. A little practice and you will have it down. Note on larger fish it may be necessary to left up a scale and go beneath it.  The faster you can get the fish back in the water the better.  It is in all our best interest to get this down for the future of our sport.

I have included a couple of pictures demonstrating proper technique one of which is a Gag vented by Jon the mate on this trip.

See you out there!!! 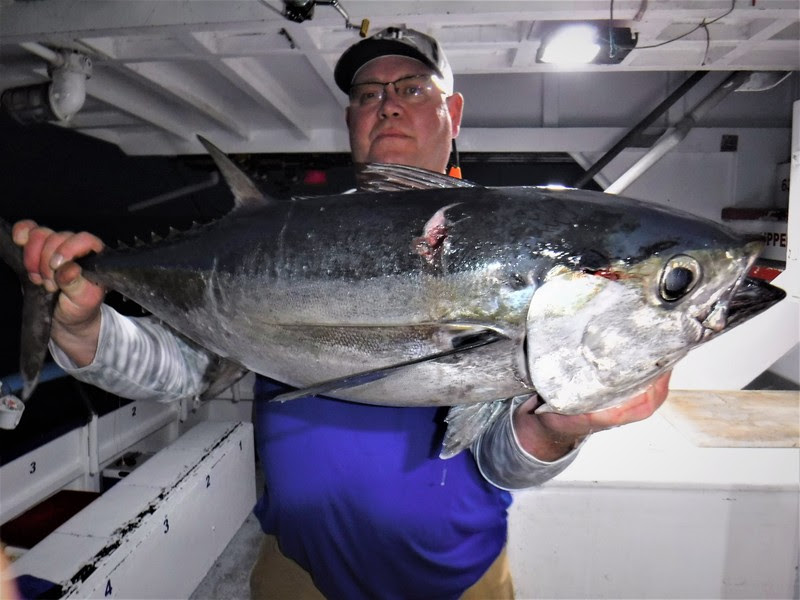 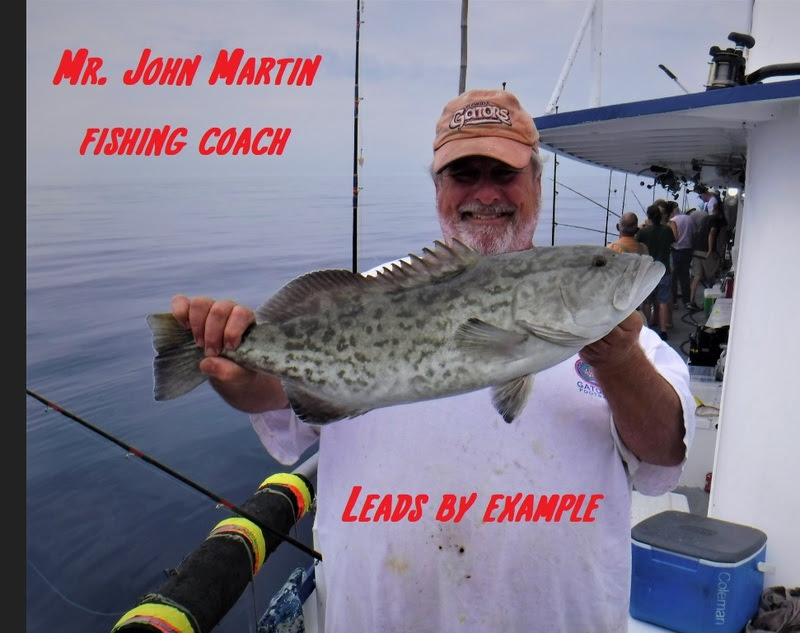 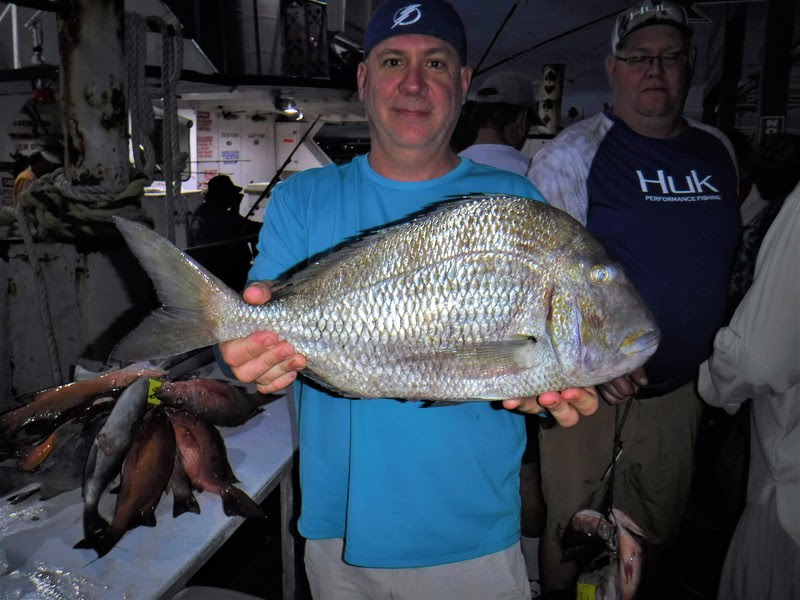 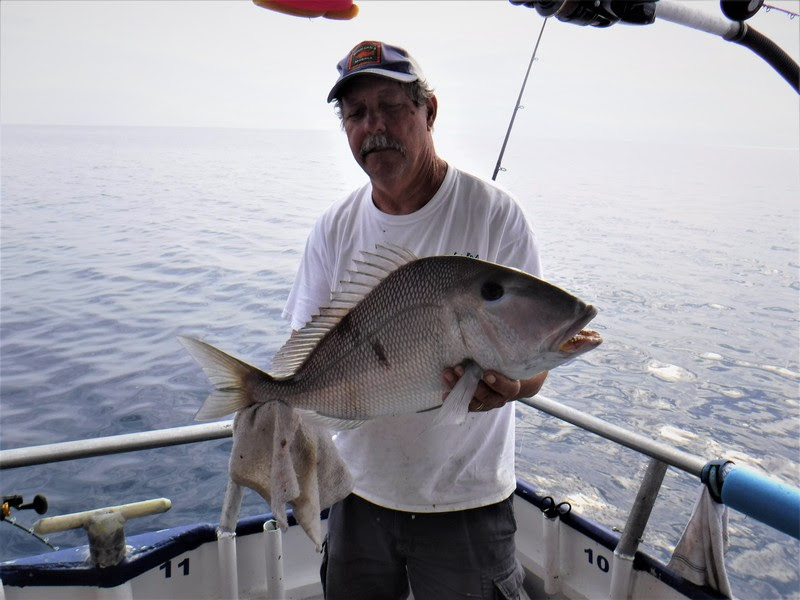 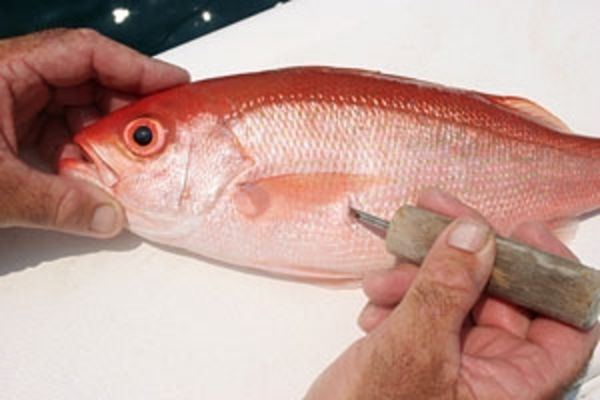 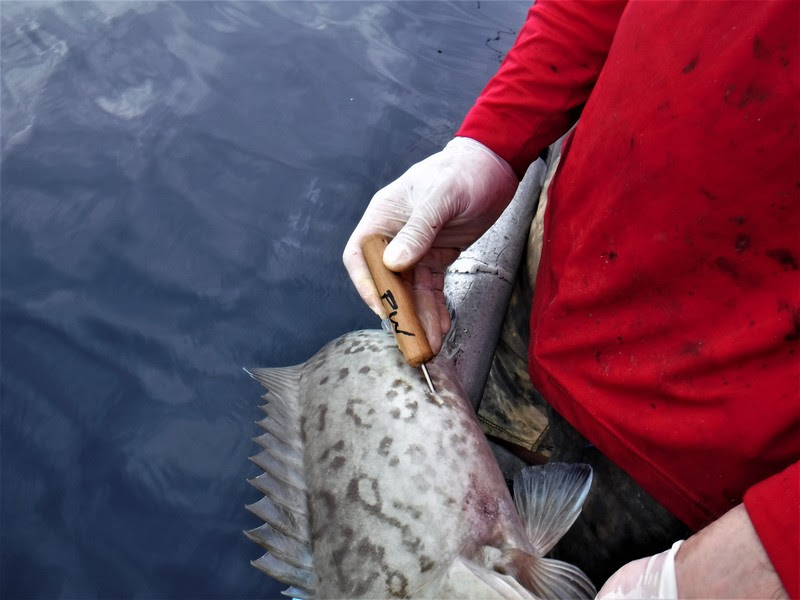