landshark Posts: 76 Deckhand
April 2018 in Southeast General Fishing & The Outdoors #1
Every year I chase the Spring migration of sharks that roam our beaches. It starts with the Blacktips in February, turns into Hammerheads, followed by a good push of Tiger Sharks into April. I know Land based Shark Fishing is looked down upon many and It's a sport that can upset many who don't understand it. Which frankly confuses me, as all Catch and Release Sport fishing whether it be small or big game, should be treated on the same playing field.
Nothing gets me and hundreds of other Beach fishermen more excited than seeing the sickle shaped fin of a Great Hammerhead breach the surface of the water. It is one of those sights that you cannot put a price tag on. Last week a group of around 8 of us all met up in the morning and began to paddle baits. Before I had arrived my buddies had successfully caught and released 2 9-10ft Great Hammerheads and had a third one on as we walked down the beach. This is where the video starts.

Generally 1 Hammerhead for a beach fishermen leaves us ecstatic, 2 gets us pumped and there are very few days where I have been apart of more than 3+ Hammerheads in a day. Now picture this, we caught and released 11 in a 10 hour period along with 2 9ft Tiger Sharks. The best part was every single shark was unhooked, and released within 1.5 minutes of leadering the fish.

Sharks washing up on the beach have become a big problem in recent years and land based shark fishermen are generally to blame. Accidents do happen, but a large percentage of these are from careless or inexperienced anglers who spend too much time taking pictures and fighting the fish itself.This is why you see us fishing nothing smaller than 80 wide sized reels, to make surer we can put enough heat on these fish to ensure a healthy release.

From around 8am to 7pm we caught more hammerheads in a single day than anyone in the land based shark fishing world to my knowledge. It is certainly a day I will never forget and a video I will never outgrow. Hope you all enjoy it and see why as a fishermen who spends a good amount of time offshore chasing pelagics, I still get drawn back to the sand where I laid my roots as an angler. 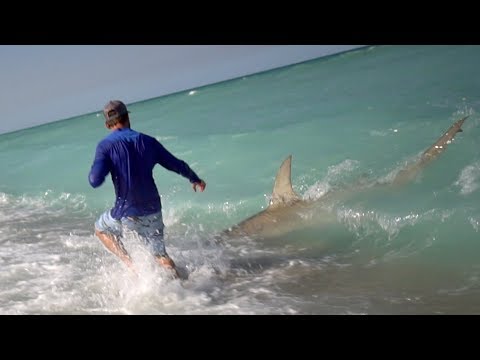