tehami01 Posts: 3 Greenhorn
April 2018 in Keys General Fishing & The Outdoors #1
First Trip report on Forum.  Just got back from Marathon this morning.

First want to thank Capt. Harlan Trammell for taking my friends and myself out for a few days last year and helping teach a few things about trolling and fishing the humps.  For any of you trying this out for yourself, save yourself a lot of time and book him for a few days.  It will be money well spent.

Overall, weather better than I could have expected.  Family wanted to go down on spring break which is earlier than I've been down before.  Got on the water 5 days in row which is actually better than i have done in May or June trips when I've came down.  Temp was also great.  No complaints on the weather at all.

Day 1.  Trolling with wife, 14 y/o daughter, daughter's friend, and 11 y/o son.  The girls like normal were slow at getting up and going and did'nt leave till about 10:30.  Went out looking for any birds or weeds at all.  Found a small weedline at about 550ft.  Turned to start trolling and one of the lines goes off and we see a dolphin jump.  Had my daughter and her friend start clearing lines and the my daughter says, "Dad, this ones hard to real in!"  I had to tell her its because there's a fish on the other end!  So now we have two fish going.  They both start fighting and my daughter gets hers closer to the boat and I see that its actually a nice wahoo!  I get kinda anxious, cause I've not yet seen one in person.  We manage to gaff the fish and get it into the boat.  Good old Dad messes up on the nice dolphin my son has on and miss with the gaff.  Somehow the fish gets off and goes out of sight.  Son not so happy with dad at the skills with the gaff.  We end up trolling the same weedline and catch a couple undersized dolphin.  Daughter's friend and myself are feeling a bit seasick(21 hour drive from Kentucky), we decide to call it a day at about 2 and go home.  Wahoo on blue and white islander and the dolphin was on red and black billy bait.

Day 2.  Girls decide fishing is a little slow for them and they want to try Sombrero Beach.  My son agrees with them and just he and I go out.  We get out about 8 this morning.  Went out to the same area around 550-600 out from Marathon.  Water more rough today, probably 3-5ft.  Pretty big for two guys from Kentucky.  We do find a weedline again and he is able to work setting the rods while I steer the boat.  He manages to catch a couple small keeper dolphin on the same black/red billy bait turbo slammer.  Troll for a couple more hours here and there and about ready to call it quits and same lure goes off and he gets to catch his biggest dolphin for his young fishing career.  He's getting a bit sick by this point and we head home for the day about 1 and enjoy some time with the family.

Day 3.  Girls decide shopping is better than fishing so they go out and leave my son and myself again to fish.  We try to head out again early so we can go out and check out Key West for the evening.  Asked him what he wanted to do and he said go look for dolphin again of course!  Sounds good to me so decided to go back out to the same depth and see what we can find.  Same weeds but more broken this time.  Again catch a couple small dolphin on the same billy bait.  We give up on the scattered weeds and look around for some birds.  Nothing around so set off blindly trolling for a bit and almost immediately one of the lines starts screaming.  I assumed it was going to be a dolphin but my son says he saw it jump and thinks its a shark because it was kinda grey.  I told him its probably not a shark hitting that trolling lure then it jumps and tail walks across the water and I see he's actually got a sailfish hooked up!.  Another first for us!  We manage to get it to the boat and I comically try to get this into the boat to snap a couple pics.  Happened so fast and I was in shock so pics are not great.  So day three goes down with another big catch for my son.  Blue/white islander was the bait.

Day 4.  Hump day!.  Weather was great.  My friend Matt decided to join us from Kentucky and flew in the day before.  Matt had never been deep sea fishing before.  So we make the trip out and get there early with only a couple of other boats out.  Put out lines and immediately have two blackfin on.  Both manage to get off from Matt and my son Steven.  They get the hang of it and manage to catch about 7-8 that morning. Matt also manages a nice dolphin out on the Marathon Hump that day.  We attempted to do some jigging and didnt have much success.  Started the trip back in and had to stop back by our favorite depth of 550 and catch 2 more dolphin.  Matt is now hooked and will be making return trips to the keys for sure.  Everything today was on different colored billy bait turbo slammers.  Black/red on most of the tuna and actually one of the dolphin.  Various other colors used as well.

Day 5.  We did so well yesterday and the weather was so great we went back out to the hump.   Matt brought is girlfriend along and we managed to again catch some blackfin.  We actually missed about 5 this morning.  Did keep another 7 though.  Our luck finally ran out on the dolphin at 550.  Did also try that morning on some weeds at 300.  No takers.  Same billy baits today.

It was a blast of a trip.  First real full trip with no guide.  Didnt actually try to reel a fish in myself all week but had a blast watching my friends and family.  Those two days with just my son was something I hope neither of us forget.

Thanks to everyone who posts in this forum.  Over the past 4-5 years I have read tons and they help greatly and also keep me dreaming in between trips.  Thanks again to Piner Wahoo and his trips with us last year.  I hope the pictures are a good advertisement for what he can help with. 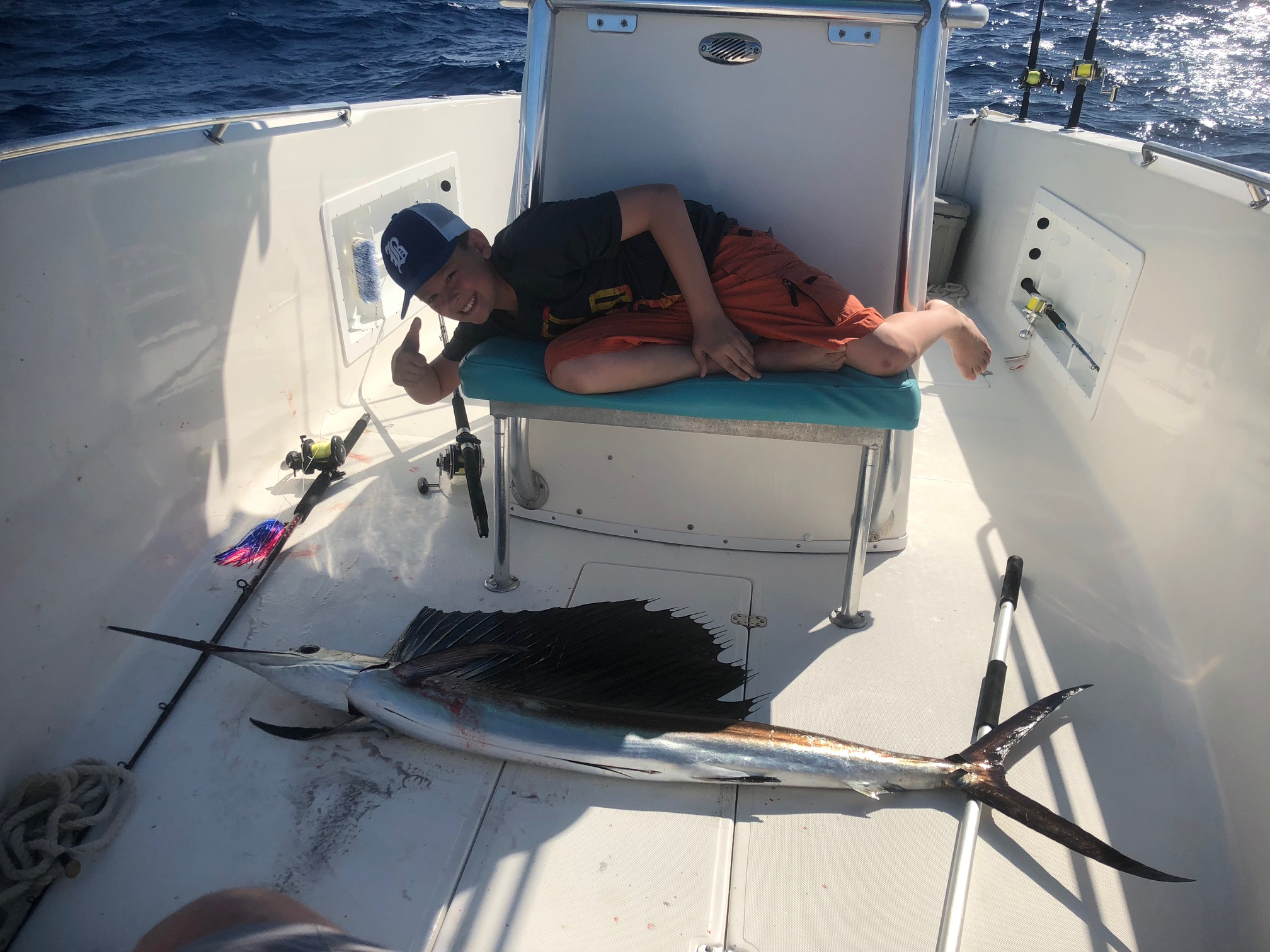 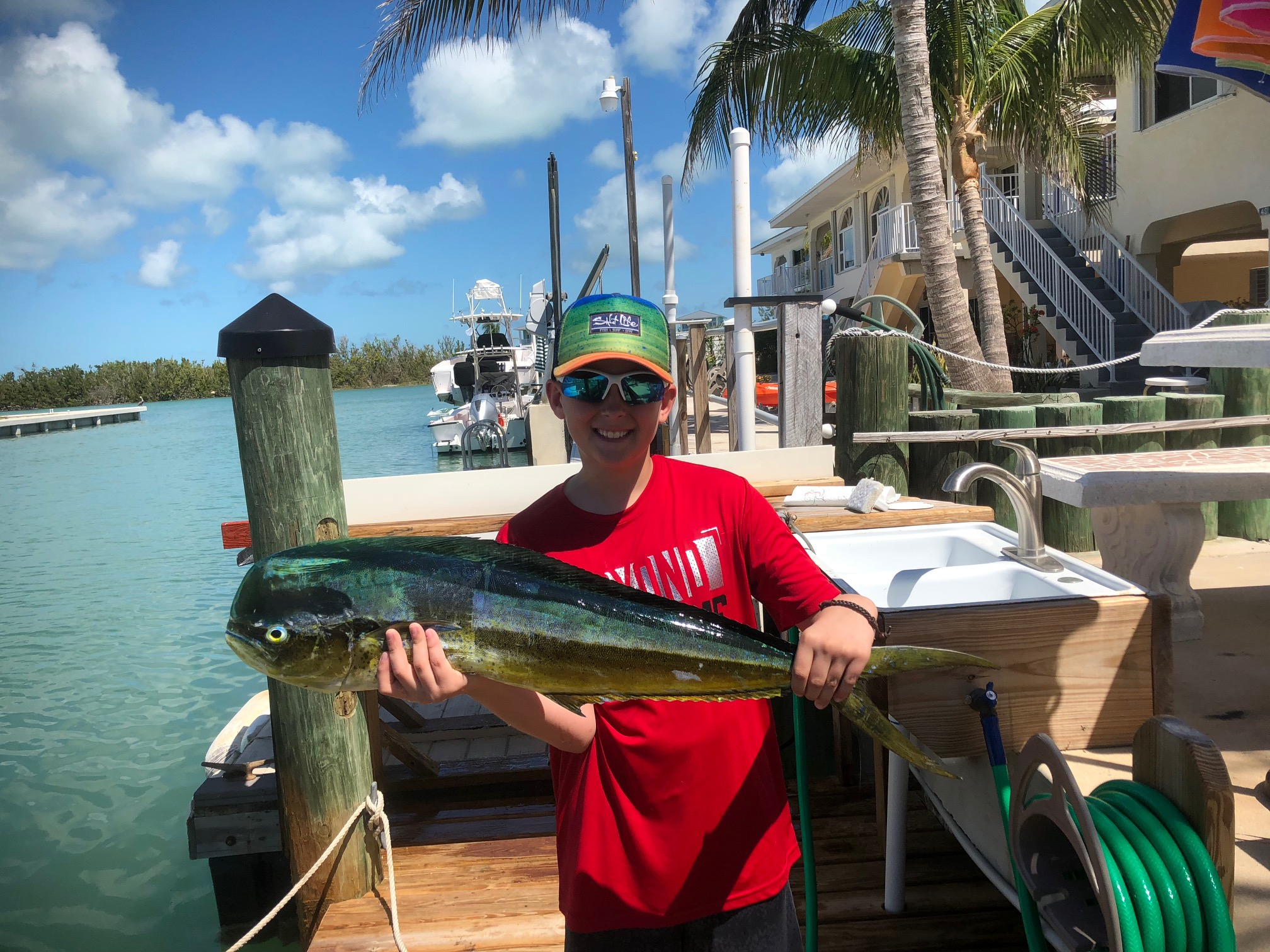 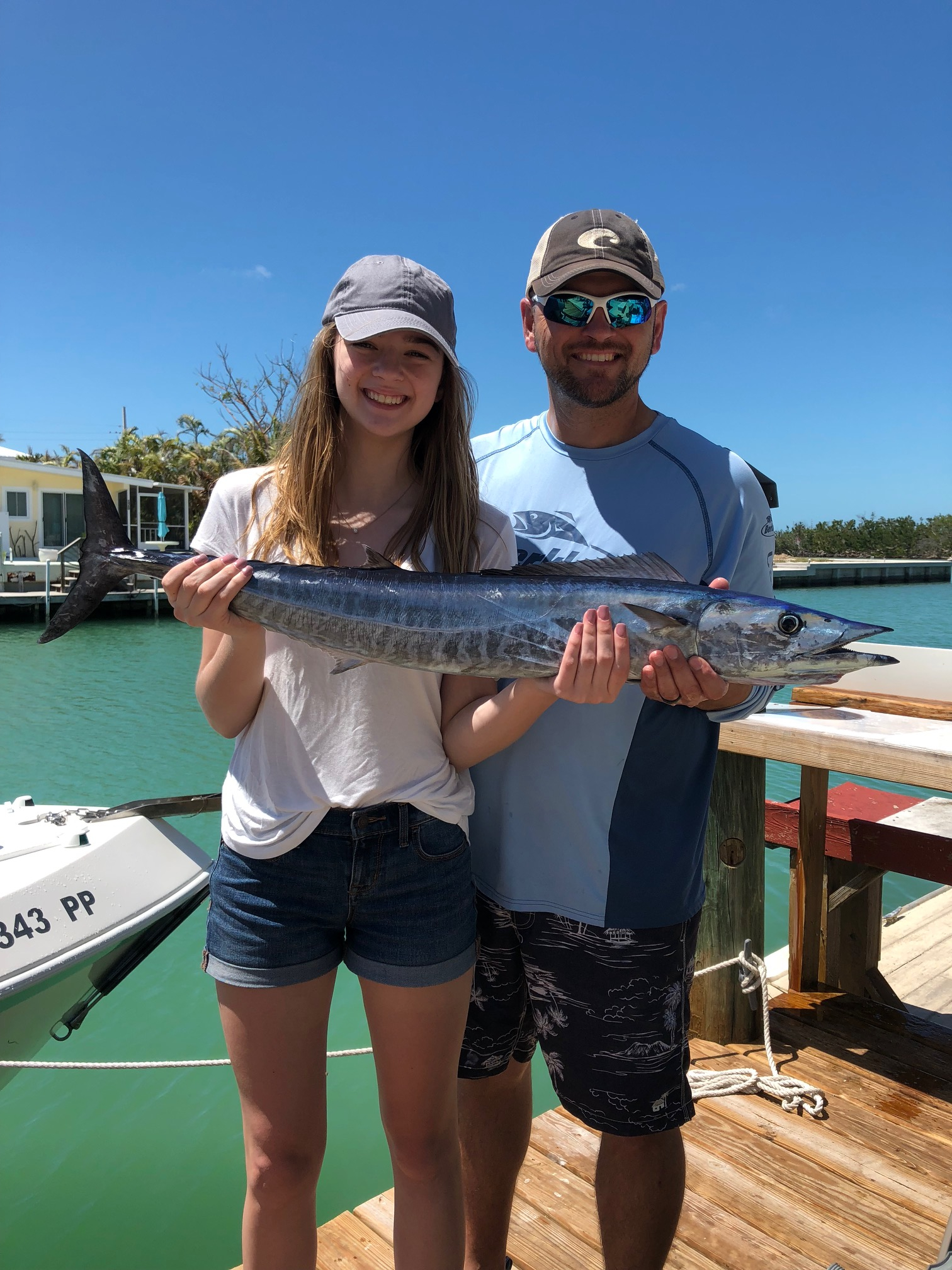 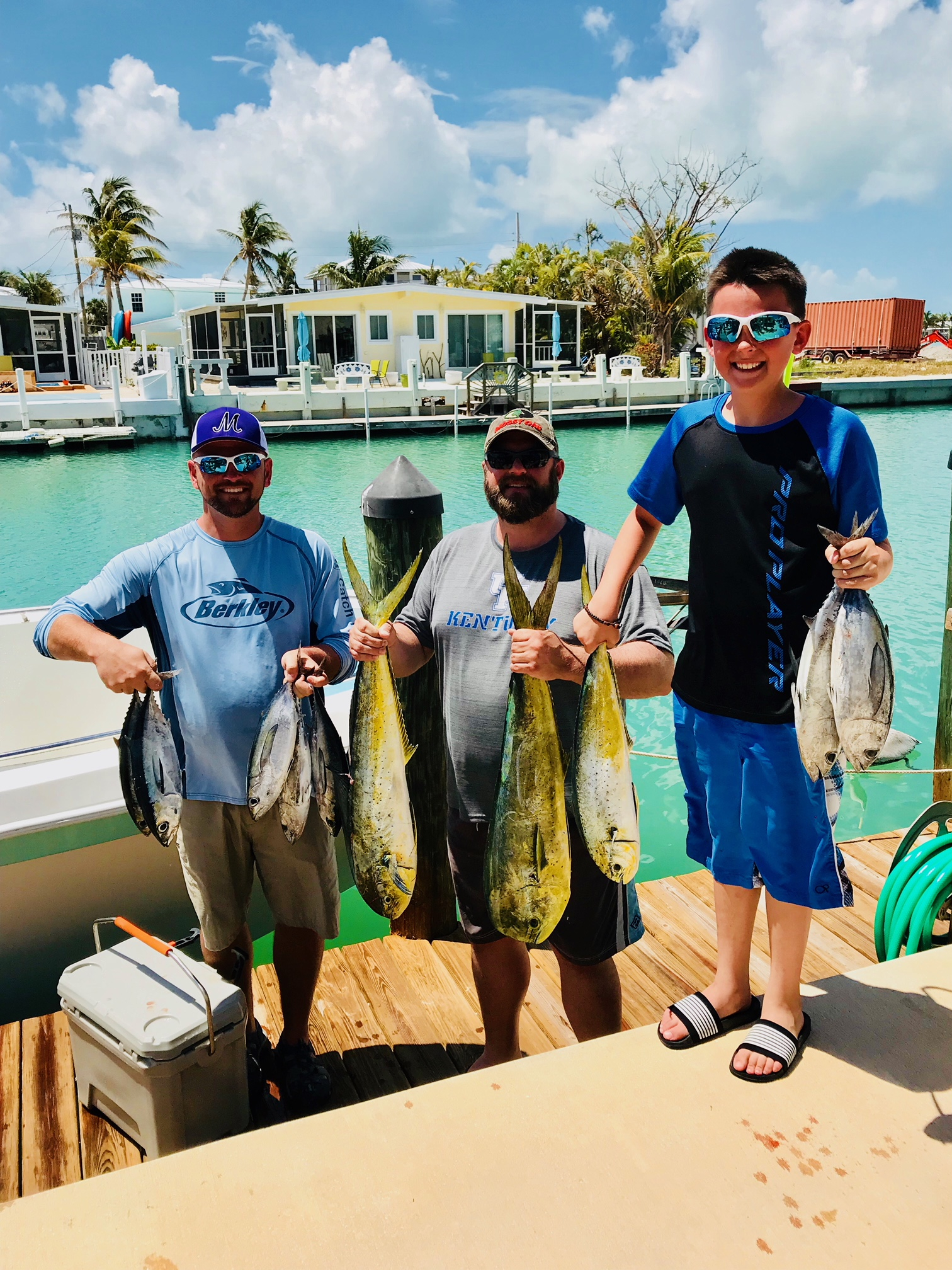