Our First Youth Turkey Season together - Bragging on my little man!

This past fall was my little man's first "full" hunting season going with me pretty consistent. The previous year he went a couple of times but not regularly as he did this year. It was to the point that I was told, "You cannot go hunting by yourself." When I inquired as to why I cannot hunt by myself I was informed that "You have to take me with you."

Christmas came and we bought him a little .22 and he'd been shooting that quite a bit. He also was talking and asking questions about wanting to shoot a deer and turkey and when he could try. Like and reasonable parent I told him he could shoot one as soon as he could prove to me that he could accurately shoot a gun. He's been pretty spot on with a .22 and, much to my surprise one weekend, he was shooting a 4" cube @ 50-60 yards out of a tree stand!

With the constant questions I asked if he wanted to try to take a turkey this spring. His immediate response was 'YES!' so we set out to make that happen. We started with borrowing a .410 from TeamOutlaw and practicing at 15-20 yards on paper targets with 2.5" #8 loads. Little 'foo is a truly "little" guy. At 6 he only stands 3'6" and only weighs 44lbs so his first shot was a bit of a surprise to him and actually ended that days shooting session. But, like a trooper, he got back on the saddle a few weekends later and did a bit more shooting prior to season.

Even with the #8s at 20 yards he would have been killing a turkey, but that's not what I had in store for him to shoot come "game time". I got into hand loading Tungsten shot for turkey loads as a collaborative effort between 3 of us. I did the math, we all split the costs on supplies and we now have loads for 16, 20 and .410 shotguns. The .410 shoots 13/16oz of #9 shot. Some of you might think, "#9s? That's a bit small for turkeys!" but if you follow the 'heavier than lead' trend, this stuff is the most dense shot out there (lead is roughly 11g/cc where tungsten is 18g/cc). I killed my 3 birds last year (one in GA and two in KS) at 45, 20, and 20 yards last year. TeamOutlaw killed them around 20 and then a bird this spring at 55. My 3 were all dead where they stood, no flopping, no kicking. TeamOutlaw's bird this year "Looked like his head wrapped around behind his fan and he went straight to his back with his feet paddling in the air". No flopping bird. So it is truly nasty stuff (if it wasn't so expensive, a 1oz load of #9s could be an interesting small to medium duck load at decoy range!)

The Florida Youth season comes and goes without much to mention. Some gobbling and little sign.

We returned this past weekend for a second attempt, in a different location, to see if we could wait out/call in a bird. Saturday morning was beautiful. Cool, calm, song birds opened the morning up as we walked in to the blind. After I got some decoys out and got him in the blind, I own hooted once. We were answered by two birds - both a long ways off, one on the property (and possibly on the wrong side of the creek) and the second off the property. One more time for good measure, and to make the birds gobble for him and to elicit that smile I was looking for. That might have been the downfall of the morning as the bird on our property never opened his mouth again. Opposite that was the bird off the property that didn't shut up until after 10AM and he would gobble to everything in the woods, including me on occasion. We sat until Noon when I asked what he wanted to do and he said he was ready to go home. On the way home I asked if we were going to hunt tomorrow and I got a big grin and a"Yes, sir!" answer from him. 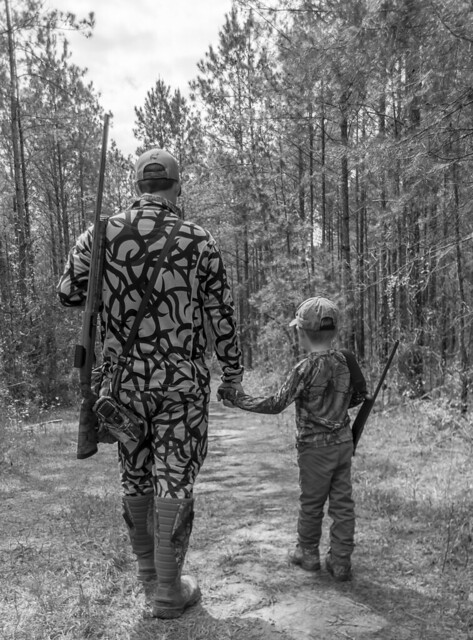 Sunday morning was the complete opposite to Saturday. The fog hung low to the tree tops, although not completely on the ground. The loud mouth bird off the property only gobbled 4-6 times on the roost and never said a word after. The bird on our property never opened his mouth, at least within earshot of us. Overall, the woods were eerily quiet and void of the usual song birds, owls, crows, hawks or wood peckers that notify that morning light has arrived.

It didn't take long before it was "iPad time" as he was fidgety without any further morning talking from our traditionally tumultuous feathered friends. Previously I had been instructed to inform him when I was going to call so he could listen too. This morning was so quiet I didn't even bother as I got into a routine of switching calls every 15 minutes and expecting a non-response.

He played on his iPad as I called and this went on until around 10AM when the woods suddenly seemed to "come alive". The wood peckers became vocal, the song birds started to sing and those pesky crows became extremely boisterous - enough so that they got a bird to gobble shortly after my calls!