Went shark fishing on Tiger key back in late November

Hope you're all well and resting up your fish-fighting muscles as the cold front blows through.
I've been meaning to post a report of my trip for a while now but I've been bogged down with work, life, etc.

I drove to EC on a Thursday night and slept in my car, as one does. Before I fell asleep I enjoyed a few cold ones while fishing that bridge between EC and Chokoloskee (where the construction was going on). Only a few hardheads to show for my efforts, but the current was ripping and it looked fishy. Anyone ever have any luck there?

I had planned to paddle out before dawn but realized that I left some critical shark fishing supplies at home. I hit Everglades bait and tackle when they opened at 6 and the lady running the shop was really helpful in getting me sorted. Great place, great location, great people.

I paddled out of the rod and gun club because the park was closed at the time. It was a smooth ride out, paddling with the current is great. Beautiful landscape and the marine life is amazing. I'm not sure whether November is tarpon season in the 10k, but they were rolling all over the place on my way out. It was so tempting to fish, but I had a long way to go so I held off. I made it to Tiger key within about 3 hours, set up camp, had a bite to eat and got to fishing for shark bait

I managed some jacks, and also netted some mullets and hooked a 20 lb stingray, so I was good to go.

I then proceeded to fish for the next two nights and hooked about 50 sharks, landing maybe half of them. It was awesome. I could only fish one rod, because when I paddled out 2 baits I would get double headers almost immediately, and I was on my own, so it never ended well. I actually had 3 baits out once and had 3 takes about 30 seconds apart. Total ***** show. All told I think I caught 7-8 species of shark, up to about 7-feet. Lemons, bulls, spinners, blacktips, a 6-foot hammer, some bonnetheads, and I think a couple of others. Unfortunately, I lost a lot of the bigger ones to oyster bars and other sharp things in the shallows. The night time selfies were tough and most of my gopro footage didn't turn out in the darkness, but I did manage a few decent pics and clips, so I made a short video, mostly to show some buddies back home in Canada how great the 10k are

Anyway, another great couple of nights in the glades. Here's a few pics and a video for your enjoyment. I look forward to getting back down there some time soon. 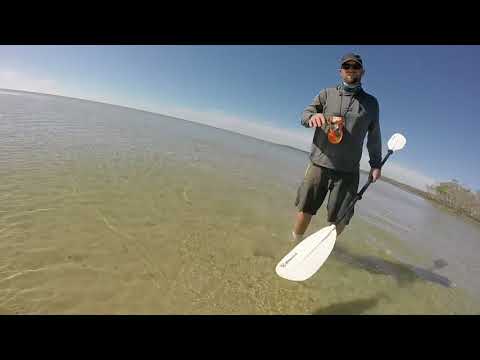