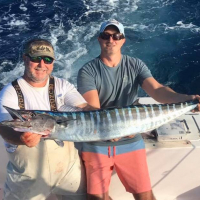 Captain Easy Posts: 150 Deckhand
November 2017 in Keys General Fishing & The Outdoors #1
I got to take my son Ian out this past weekend. Business has been slow since the storm, but the good side of that is there's been a lot more time to do things with the family. When we have gotten out the fishing has been excellent and this past Saturday with my son was no exception. We started the day on the patch reefs. The bite was decent and we put a dozen yellowtails and some nice muttons in the box. I also put a few grunts and a bunch of ballyhoo in the livewell while we where on the patches figuring we could probably use them later. I asked my boy what else he wanted to do and he said "lets go and try to catch a grouper", so we headed out to some spots in the 200' range and started dropping. After a few attempts we managed to put a nice black grouper in the boat. I could hear on the radio that the sailfish action had been steady that afternoon and asked my son if he wanted to give it a shot. He did, but I told him that with just the 2 of us on the boat and not much time left in the day we could give it a shot, but not to get too excited. Well that kid must be good luck. I ran into about 120 feet and slowed down to put out a live ballyhoo spread. I put the first bait in the water and handed him the rod and told him to put it up in the outrigger while I got another bait out. As I turned around and started to fish another bait out of the well he said, "dad I think we're getting a bite" The bait hadn't been in the water 10 seconds and I turned around to see a sailfish sinking down with the bait in his mouth. Ian went for it and hooked him like a pro and managed to get the release and a few pictures about 20 minutes later. We headed home after that, all in all a great day on the water with my best buddy. Here are some pictures from that day.