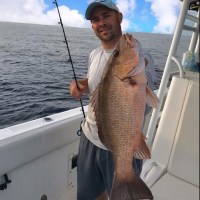 clarosa Posts: 777 Officer
July 2017 in West Central General Fishing & The Outdoors #1
So I had a fishing trip planned for my friend and his wife on Sunday and tried to plan ahead and get out on the water super early to beat the storms and get some Gags early in the am and then Mango's and ARS after that. Boy did that plan fail miserably. I met them at the ramp at 05:30 and we were on the water by 05:45. Got to my bait spot and had a well full of a mixture of big whitebait and pinfish of all sizes by 06:30. One problem...a big line of storms were just sitting about 7-10 miles offshore. Lots of lightning, wind and nasty looking skies. So I told them "this will probably move inland in no time and we can wait it out and then run offshore once it does". The storm had other plans...just sat there for hours not really doing anything other than building. I kept checking the radar on my phone and after about an hour I saw a little break just about where we needed to head so I figured I'd try to shoot the gap. We pushed and pushed and the wind got worse and worse with the convection from the storms and after about 10 miles, I throttled down(seeing their bewildered look from the slamming) and told them we're better off just sitting on the flats for a while and waiting to see if the weather would calm down. We sat at a little broken wreck for about 2 hours and were almost about to call it, and I do another look on my radar and it looks like it was breaking up. Another 30 mins went by and the winds lightened up and I said "lets see if we can fit in a lil fishing". It was now 11:45 but the waves were much more manageable and made for a quick run to the mango spot in 55'. No gags today since I planned on being on the gag spots early morning before the tide picked up. Worked a few mango's but the bite was tough with the full moon being the night of and there were no ARS biting even though in previous trips we were getting a lot of them on these numbers. So with a few nice sized Mangos over 20" in the box I figured we could go grab our limit of ARS so I headed to some numbers I have in 57' that I've been nailing them in. Once we anchored, the bite was sudden and on fire right away. Every bait down was getting hammered. Frozen dines and whitebait were best and got the bigger ones. We ended up getting our 4 person limit and all were from 22"-24 1/2". We sat there for a lil while just catching them until the current picked back up and it was now 3:30pm so we pulled anchored and started the trek back. Luckily we stayed resilient and waited the storms out because it ended up being a pretty good day and my buddy and his wife had a great time which was all the mattered.
bj charter.jpg 86.1K
bj charter2.jpg 55.7K
bj charter3.jpg 97.6K
bj charter4.jpg 97.2K
bj charter5.jpg 81K
0 · Share on TwitterShare on Facebook