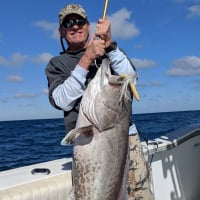 saltybum Posts: 1,660 Captain
August 2016 in Fly Fishing #1
I broke the tip section about two inches down from the tip top and sent the rod in to have a new tip section made.
Prior to sending it in I called and stated my desires to have the broken section returned with the new one. Since it was a NON warranty repair I was told to write it on the repair form and it would be returned.

Here's the short of it.

I got the rod back but not with the old tip section. They admitted their mistake then started making excuses like "a shorter tip DRAMATICALLY increases the stress on the next section leading to further breakage" thus why they trashed it.

I stated that would be my problem and the tip was my property and they had no right to trash it.

Here's the next reply back from the sales manager,
"(standard company policy -- loose shards of graphite are quite dangerous and we destroy them after measuring the fittings)". Quite dangerous? A very blatant insult to my intelligence, me thinks. I replied back "I spent four years in the Army in combat arms and a broken rod section would on the bottom of the list of things I would consider dangerous to me".

They gave me a cap the t-shirt, kind of like giving a kid a candy bar and saying "Now go away"

What's your opinion of this customer service and their statements about a broken tip. I think they owe me a tip section.