syd7792 Posts: 58 Deckhand
June 2016 in General Freshwater Fishing #1
I have become a fan of the management area ran by FWC in Lakeland called Tenoroc. The fish are healthy, the lakes are clean, and the people are great. I am normally out there fishing in my kayak. I decided to try one of the lakes I had not tried yet and a man named Bert gave me the tips on this lake. I ended up following him in my kayak while he lead the way in his john boat. Bert was talking up a storm about the Zoom Finesse Worm. It looks just like a trick worm but shorter in length. I decided to go with my initial plan and fish with a Doomsday tackle turtle. Literally, in the first ten minutes Bert had five hook ups on this worm. Being the hard headed woman I am, I continued with the turtle. An hour had passed and Bert is still constantly getting hits and catching fish while I have not had one bite. Finally, I tie on this finesse worm Texas rigged. First cast was under some suspending tree limbs. I took my eye off the line to look at Bert as I hear him fighting a fish. I look back at my line and it is slowing moving away from the limbs into deeper water. I set the hook and all of a sudden I was in a fight of a life time! During this hook up Im thinking this bass is about five to six pounds. As soon as that bass jumped and realized this bass was close to a double digit my adrenaline kicked up hundred times more. As I bring the bass in to net her I am freaking out like a kid on christmas morning. My hands are shaking. I can barely speak in complete sentences. This is what I live for. A fish like this is why I love bass fishing so much. Weighing in at nine pounds four ounces and measuring at twenty five inches long with a twenty inch girth. This bass is my official personal best! After getting some pictures this bass was realized and swam away to enjoy another day. 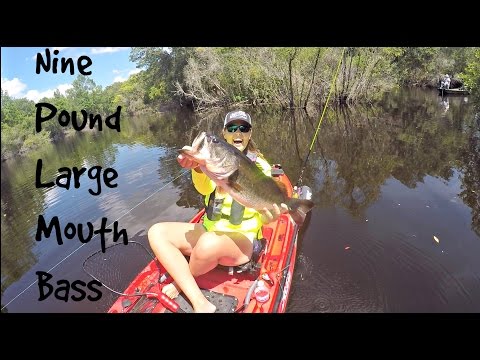