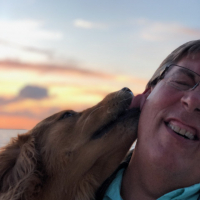 woodytoo Posts: 404 Deckhand
April 2016 in Keys General Fishing & The Outdoors #1
We sure have spent more time watching the wind blow than fishing that is for sure! Had an opportunity to spend two weekends in a row in Big Pine Key and finally we got one shot offshore. Best part is I had two friends in town Kai and Ted, so Robin and I got to turn them onto the offshore hunt.

Weather was decent, SE winds 10 to 15, seas 2 to 4. The water temp was hovering around 70, and the Gulf Stream was forecast to be 20 miles south of Looe Key. We left mid-morning the plan was to look for tuna on the way out, but head generally for the stream edge and chase down a Mahi bite if one was out there.

As per plan, when we hit the ups and downs in 500 feet we picked up birds chasing bait and tuna. Rods out, feathers way back and we picked up 2 decent black fin and a small Bonita. One of the black fin pulled the string pretty good, and it was fun to see Ted on the attack!


Not to be outdone, Kai got in the action too!


Things slowed down on the tuna as the sun got higher, so we ran on out to sea and hit a rip line marking the edge of the stream. We pushed out further and found a decent trash and weed line and set up shop for a mahi hunt. It was slow going, but we picked up 3 decent fish, nothing big fairly slow, but steady.
Here is Kai with his first mahi …

I figure we need a bloody cooler shot just for fun –

Back at the dock 2 tuna 3 dolphin, happy crew! Nice way to start spring off

Gotta finish it off with the food picks – we do love our black fin lightly seared!


But Robin found an Italian “Florentine” inspired tuna steak recipe that is awesome. Basically season a thick hunk of tuna like a steak – olive oil, Rosemary, sea salt, lemon zest and pepper then lightly grill it on fire as hot as you can get it. Serious those were big hunks of tuna, and I out it on the grill for 2 minutes a side. Lordy Lordy it is good!

Robin paired it up with a mushroom risotto and garbanzo bean salad, and it was definitely the ticket!