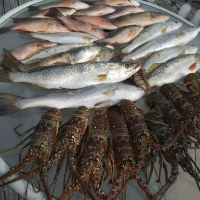 Klinger Posts: 2,119 Captain
October 2015 in Panhandle General Fishing & The Outdoors #1
Our parents left us a timeshare in Fort Walton on the Bay, so we spent last week there. I fished almost every day, but this is the only time I fish the area, and also almost the only time I fish inshore. I decided to take the skiff and do as much exploring and learn how to fish the Bay as best I could. Spent several days looking for areas that might hold fish (Like I'm an expert at this :willynilly). Finally found a couple of areas that produced a few undersized fish, so I'm making a little progress. Did a little more exploring and found an area with promising grass flats and a few deeper spots around them and did manage to catch a few keepers. one day I did manage 3 keeper trout ranging from a little over 15" to a little under 20", but didn't get any pictures, as the latter part of the week I'm fishing solo. Finally did catch an over slot Red and a trout a little over 20", so maybe I'll at least know where to start next year! Probably never be in the same class as Old Dog, but maybe catch enough for an occasional fish fry while there:fishing