Jack Hexter New Port RicheyPosts: 5,261 Moderator
June 2011 in Off Topic #1
I used to really enjoy going to the Serpentarium and watching Haast catch and handle the Cobras. Another legend dies

Bill Haast, a Man Charmed by Snakes, Dies at 100
By DOUGLAS MARTIN
Published: June 17, 2011
Bill Haast figured he had handled more than three million poisonous snakes over the years, and he had the hands to prove it. 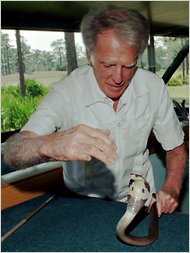 Phil Sandlin/Associated Press
Bill Haast in 1996 at his serpentarium in Punta Gorda, Fla., with a Chinese cobra. His first serious bite came at age 12.
An eastern diamondback rattlesnake left one hand looking like a claw. A Malayan pit viper mangled an index finger. A cottonmouth bit a finger, which instantly turned black, prompting his wife to snip off the fingertip with garden clippers.
Mr. Haast was bitten at least 173 times by poisonous snakes, about 20 times almost fatally. It was all in a day’s work for probably the best-known snake handler in the country, a scientist-****-showman who made enough money from milking toxic goo from slithery serpents to buy a cherry-red Rolls-Royce convertible.
A secret of his success was the immunity he had built up by injecting himself every day for more than 60 years with a mix of venoms from 32 snake species. He suspected the inoculations might have explained his extraordinarily good health, but he was reluctant to make that claim, he said, until he reached 100.
Mr. Haast, who was director of the Miami Serpentarium Laboratories, a snake-venom producer near Punta Gorda, Fla., died of natural causes on Wednesday at his home in southwest Florida, his wife, Nancy, said. He was 100.
Mr. Haast’s story was good enough in its day to land him in Walter Winchell’s syndicated column, on “The Tonight Show” and, hardly surprising, in Ripley’s Believe It or Not attractions. His original Miami Serpentarium, south of Miami on South Dixie Highway, attracted 50,000 tourists a year for four decades.
Outside was a 35-foot-high concrete statue of a giant cobra, forked tongue flicking menacingly. Inside, Mr. Haast, the self-proclaimed “Snakeman,” entertained paying customers by using his hands to grab snakes below their heads and force their teeth into soft plastic. Venom would then drain into test tubes fastened to the plastic. He did this 100 or so times a day.
The serpentarium was more than just another roadside attraction. The price of a gram of freeze-dried venom from exotic snakes, requiring 100 or more extractions to accumulate, could exceed $5,000. The substance is an essential ingredient in making a serum to treat snakebite victims. It has also shown promise as a medicinal ingredient.
Mr. Haast and a Miami doctor treated more than 6,000 people with a snake-venom serum that they and their patients contended was effective against multiple sclerosis and arthritis. After the CBS News program “60 Minutes” did a report on the subject in December 1979, interest in the serum surged. But in 1980 the Food and Drug Administration banned the product as useless after saying that numerous deficiencies had been found in Mr. Haast’s manufacturing process. Nevertheless, researchers have continued to work on drugs made from venom in the hope of using it to treat cancer, Alzheimer’s and other diseases.
Mr. Haast himself indisputably saved lives. He flew around the world to donate his antibody-rich blood to 21 different snakebite victims. Venezuela made him an honorary citizen after he went deep into the jungle to give a boy a pint of blood.
The favor was returned in 1989 when, according to The Associated Press, the White House used secret connections to spirit a rare serum out of Iran to treat Mr. Haast as he fought to recover from a bite by a Pakistani pit viper. (Different venoms require different antidotes.)
William E. Haast was born on Dec. 30, 1910, in Paterson, N.J. He caught his first garter snake at 7 at a nearby canal. His first serious snake bite came at age 12, when he was bitten by a timber rattlesnake at Boy Scout camp. The same year, a copperhead’s bite put him in the hospital for a week. When young Bill brought his first poisonous snake home to the family apartment, his mother left home for three days, he said. She finally agreed to let him keep a snake or two in cages.
“The snake would bite the mouse,” he said in an interview with The Miami Herald in 1984. “The mouse would die. I found it intriguing.”
He bought his first exotic snake, a diamondback rattler, from a catalog. Noticing that it had come from Florida, he knew then, he said, that Florida was his destiny. After dropping out of school at 16, he joined a roadside snake show that made its way to Florida in the late 1920s.
The snake attraction soon failed during the Depression, so Mr. Haast went to work for a bootlegger in the Everglades, where he was pleased to find plenty of snakes. The bootlegger was arrested, and Mr. Haast found his way to an airline mechanics school.
Finding a job as a flight engineer with Pan American World Airways, he began traveling around the world. That gave him a chance to use his toolbox to smuggle snakes, including his first cobra.
Mr. Haast’s dream of a first-class snake farm came true when he opened his Miami serpentarium in 1947. His near-fatal snakebites became legend in the news media, particularly after the total passed 100 in the mid-1960s.
His first wife, Ann, divorced him over his snake obsession. His second, Clarita, and third, Nancy, pitched in enthusiastically.
Besides his wife, the former Nancy Harrell, he is survived by two daughters, three grandchildren, two great-grandchildren and two great-great-grandchildren.
Mr. Haast closed the serpentarium in 1984 after a 6-year-old boy fell into his crocodile pit and was fatally mauled. He moved his venom-gathering operation to Utah. Six years later, he returned to Florida and opened the facility in Punta Gorda, where he raised and milked snakes but did not resume his snake show.
For all the time he spent with snakes, Mr. Haast harbored no illusions that they liked him.
“You could have a snake for 30 years and the second you leave his cage door cracked, he’s gone,” he told Outside magazine in 1997. “And they’ll never come to you unless you’re holding a mouse in your teeth.”
A version of this article appeared in print on June 18, 2011, on page B8 of the New York edition with the headline: Bill Haast, a Man Charmed by Snakes, Dies at 100.
0 · Share on TwitterShare on Facebook