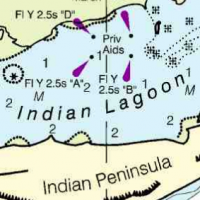 2 miles south of CSB is within the buoy line and very treacherous. I assume they had a mechanical issue that got them to the point of grounding? :nono

Watchstanders with Coast Guard Sector Mobile received a report that the fishing vessel AC III grounded about two miles south of Cape San Blas and began listing to its port side. The AC III crew attempted to refloat the grounded vessel without success.

The watchstanders directed the launch of a Coast Guard Air Station Clearwater, Florida, MH-60 Jayhawk helicopter crew to rescue the two fishermen. The helicopter crew hoisted the fishermen and safely transferred them to Panama City International Airport.
0 · Share on TwitterShare on Facebook