Temensisyakfishing Posts: 71 Deckhand
September 2014 in General Paddle Craft #1
I been itching and praying for some Tarpon since... Ever! Ive tried to catch them once with live shrimp and then once again with lures and I ended up buying live shrimp at Hallover Marina and I had two hook ups! I was taken on land to the Dania ICW and I was able to hook and almost land a 5 foot tarpon but it fell off the drop net when we were bringing it up. The itch got even stronger and I wanted to catch one from the yak so after watching the forecast the whole weekend my birthday which was sunday looked like it was going to be an amazing day. So I woke up at 4 and headed up north and found a nice area where to cast net some mullet and I was able to catch over 3 dozens in one cast, I mean there is mullet everywhere the finger size with a few bigger ones in the mix.

so I headed out and I found some nice little jacks to play with on a Rat-L-trap. After that I timed the drift. I launched north and the incoming tide was at its last 45 mins so I drifted south towards the bridges.

I past the first and I casted my mullet trying to give it a nice natural presentation. after 30 mins right before slack tide was there my line went tight and I started fighting a big fish. My target was tarpon so I was like TARPON TARPON! BUT since it didn't jump I knew it was a Snook. I hate to exaggerate but this thing had to be over 40 inches. I had a 35 incher that I caught the week before on artificial and I didn't fight this hard. this thing was a monster. unfortunately my inexperience fighting big fish was bigger than my luck and the sand paper-like mouth of the snook eventually cut the line... too bad but I wasn't mad.

second mistake of the day. playing on my phone... thumb.... line runs... Tarpon is gone... great day! thanks for reading and get out there catch some mullets theyre around! Tight lines! 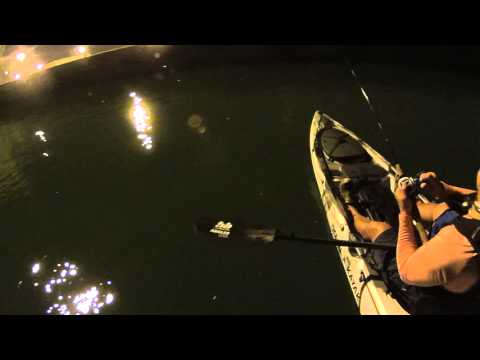