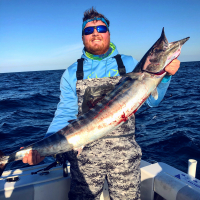 saltlife17 Posts: 192 Deckhand
August 2014 in General Freshwater Fishing #1
It appears I am one of very few people that can't catch a fish on a spinnerbait. everyone I know in the area swears by them. What size/color and what water conditions and weather should they be fished in? I've got 2 of them, one is orange and green and the other is red and black. I have NEVER caught a fish on a spinnerbait and have no idea where to start with one.
0 · Share on TwitterShare on Facebook