Morocco_madness Posts: 2,974 Captain
May 2014 in General Freshwater Fishing #1
The boats been in the shop going on two weeks and im feeling it! Had to get out and do something so, i decided to hit a nearby pond with the kayak. Me and my neighbor dropped our kayaks in and split up. I worked the west bank and he hit the east end. The Bass tend to stack up on one side. The plan was to locate the fish and then work the fish together once we found them. We circled the entire pond with absolutely nothing to show for it.... Not even a bite. It was blistering hot outside so i tried dropping deeper holes in hopes that the fish were in cooler water. The deeper areas of this pond are pretty deep at 20+ feet and we were tossing U-Tails weighted with 1/8th ounce bullet weights. Needless to say, it took a while to reach bottom. Once the bait made it's touch down, fish were on it nearly every cast. Many casts didn't require a retrieve as fish were picking it up on the drop. The bite was very aggressive. We had a great day with a lot of solid fish being caught including my personal best, a stout 6 pound Bass with a mouth big enough to put my fist in.

We threw an array of baits ranging from suspending twitch baits, Top Water plugs, Sub walking plugs, Crank Baits, paddle tails etc... Also tried a few new styles of plastic worm including, "Chompers", garlic/salted worm and Gary Yamamoto products. Did ok on the new worm brands, struck out on the hard baits. The biggest producer once again, was the "Zoom", U Tail in Junebug color pattern. They absolutely destroyed them bad boys.....

Here's some footage from our day. Did some under water shots of our releases on the better fish. Also contains slow motion shots of some big jumps(only the big fish). Trying to change it up a little bit to make the footage less predictable and exciting. Make sure to full screen the video and turn up the resolution for the full effect. The jumps will come out a lot better. 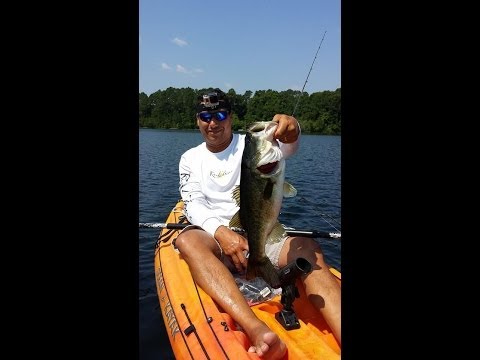