johnalki Posts: 514 Officer
May 2014 in Southeast General Fishing & The Outdoors #1
JUST REALIZED A LITTLE LANGUAGE. APOLOGIES FOR THAT.

The crew today aboard the Christine Marie was Chad (The Sailman), Eric (Plane Fish N) and John (Johnalki).

It was going to be a short day because of doctors appointments so we hit Sandsprit at 6:30am, bought baits at Dave's Baits (still the best guy around) and off we went towards the inlet.

We were greeted by a 2 to 3 foot close in chop about 2 or 3 second interval.

There was lot's of weed starting in about 110 feet so we dumped the trolling baits and went all the way to 300' without a single knockdown.

In about 235', John yells "fish coming across the spread" and about that time, the left long rigger goes ape s**t.

Chad is on the rod and we all see a large fish (appeared to be silver in color) skyrocket and we think we have a large kingfish on.

The next jump and Eric yells "Dolphin!"

Chad is fighting this guy when the left short rigger goes off and there is another peanut dolphin on that rod.

John is bringing the small dolphin in and expertly slings it in the box.

Meanwhile, Chad is battling with the large phin and we aren't quite sure who is winning.

After a bit over 35 minutes, Chad gets the phin boatside and John nails him with the gaff..and .... in da box he goes!

High fives all around and we are off for the inlet at 10:15am.

Lucky thing we left early because as we hit the inlet, we felt some rain drops and shortly after the fish is cleaned and the boat is on the trailer, the skies opened up.

Oh, this guy was looking for a handout.

All in all a great day with great friends. 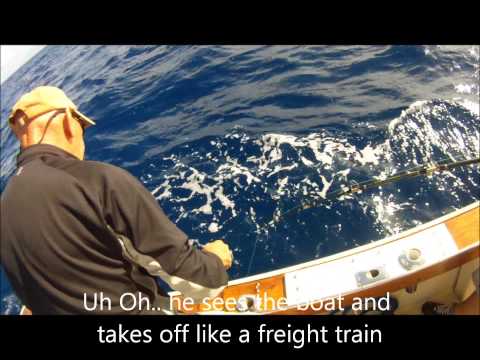