STUD YELLOWFIN, GAFFER DOLPHIN, BIG YELLOWEYES - BDAY WEEKEND ON THE OTHER SIDE!

PaulBoat Posts: 4,389 Officer
May 2014 in Southeast General Fishing & The Outdoors #1
May 31 update: video is now loaded at the bottom of this post

In almost similar fashion to the last report (http://forums.floridasportsman.com/showthread.php?153538-YELLOWFIN-DOLPHIN-MUTTON-TARPON-a-quickie-to-the-other-side-April-26-27), I was supposed to cross with a couple of friends the week before but mother nature did not cooperate.

She did however reward us with amazing weather this past Memorial Day weekend. It was my birthday and I decided to make another family fun-fish run. I called my "other son" and he was in. Momma picked up the kids from school at noon on Friday. Nick and I had just picked up our live bait and were waiting for them across the inlet at 2Georges. They jumped on the boat and off we went. We were at Old Bahama Bay to clear by 2PM. It was going to be a mad house there, and I had decided to stay at a nice quiet place further east by Lucaya (it was a good call!).

It was a smooth ride. Kids enjoyed the ride including my..... "other son" :grin

After clearing and fueling up, we continued our journey to our resort. Got our slip. Checked in. Unloaded the luggage. Joseph, Nick and I decided to poke our nose out to see if we get lucky out front. With no love in sight, and a long day already for Joseph, we decided to head back early and hit it the next day.


We met up with the girls, had dinner and turned in fairly early. Next day was my birthday and the girls were totally game to go fishing with us including getting up at 6am. Off we went looking for birds, and we found them!

Joseph let me have the first fish :angel as it was my birthday after all. I **** that thing in 10 minutes with my new "specialized" gear.


It was great having the family together for the day.


We reset and connected with another fish. This time it was Joseph's turn. He had command and control with his awesome Talica 16 setup. He was so awesome - he called his sister over and they tag teamed that fish. He would keep the rod in his belt, pump the rod, and let Sarah reel on the way down - just like I did with him only two years ago. Long story short, they brought that fish all the way up and handed me the rod when it was at the boat.


Wanting to keep it light for the girls, we decided to head to the beach and have some fun. Kids were jumping off the boat. I was taking boat **** pics...


We went into Port Lucaya at one point to top off the gas tank and Nick went off and came back with a dockside delivery of Miami Vice drinks - OMG - you can have 4 or 5 before you know what hit you!!


We headed back to our place, cleaned up and met up for dinner. We popped a bottle of champagne...


Lit up the old girl for the occasion...


Dinner was very good but the service was a bit slow because the place was packed. We decided to save the cake for the following evening as it was getting pretty late.


Joseph, Nick and I got up the next morning and took off in search of "some more"... We found it! In a very eery way, we repeated what happened on the previous trip. With a big tuna on the line, Joseph starts hooking dolphins. But he wanted to land those and he did. He pulled 3 gaffers while I was still working on that tuna. At one point, I saw Nick jumping over the fishbox and on top of the motor and stick a beautiful bull before he went into the motors - awesome!

After that, we decided to head toward the Isaacs for some deep dropping. We pulled a bunch of really nice buttons and a yellow jack. Joseph was on the jig tormenting the cudas... and a baby strawberry grouper...


We killed a few more tuna, then headed back to the barn to meet up with the girls. Joseph practiced his boat handling skills on the way back...


While I went to the pool bar to get something yummy with the wife....

Nick decided to gut our tuna and while at it gave Sarah a present!! She loved it!!!!!!!


Early dinner. Birthday cake. Nice cigar. And off to bed we go.

For our last day, we decided to head up to West End in the morning now that the crazy crowds are mostly gone. Sarah and Debra went off to Teasers to pick up some lunch for us while I was fueling up for the ride home. Sarah met up with her old friend Ms. Anne.


We then headed out front, popped a few BIG yelloweyes and completely filled the fish box...


I got back on the boat and enjoyed a fruit drink with Nick...


We took off around 2PM heading towards home. Burned a little extra gas at 40 knots for this big girl and were tied at the home dock in under 2 hours.


Oh yes, before I forget - bananas came too :grin


I've got some great footage I'll work on in the next couple of days... got some more deliveries to make in the mean time :wink

MAY 31 UPDATE: video is ready - let me know what you think 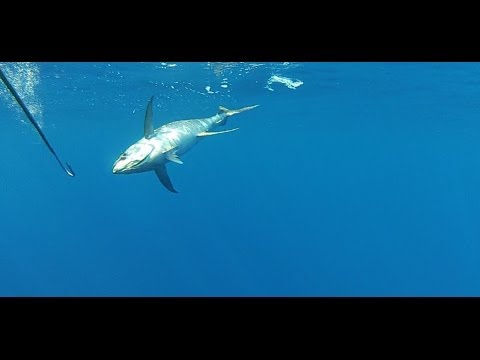