cubs83 Posts: 21 Greenhorn
November 2012 in Southwest General Fishing & The Outdoors #1
Launched the boat around 10:30 with my Dad at Coconut to no water. I saw gruntking at the ramp...hope you had a good day out there...it was blowing hard there for a while. Motored out of New Pass and caught a few Spanish on the edge of the pass. Motored out a mile or so and found a bunch of birds. I figured it would all be spanish but to me and my Dad's surprise it was all Bonita. We chased birds in the Gulf chop for 3 hours and caught 7 Bonita (one double header) and a few more Spanish. Motored on the flats around 2 and ended the day with a 22" redfish caught on a gold glitter DOA Shrimp.

All of the Bonita were caught on the new Gomame jigs by Williamson that aren't quite on the market yet. Small and green to mimic the glass minnows all of the fish were spitting up. 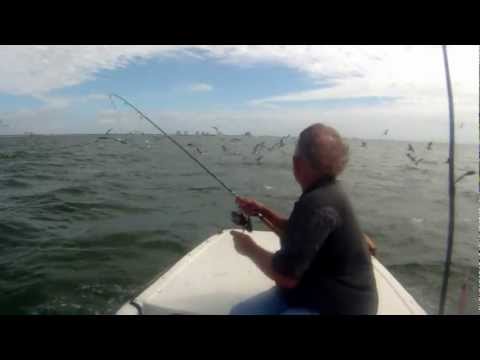