Tuna and dolphin off Delray/Boyton 3/31 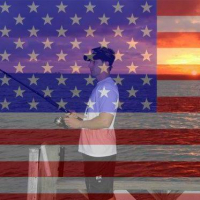 Reel Priority Posts: 80 Greenhorn
March 2012 in Southeast General Fishing & The Outdoors #1
We cleared Hillsboro Inlet a little before 8 am and headed out to about 500' where there were scattered weeds and trolled ballyhoo and blue/white and yellow/green lures heading north towards Boca. Not much going on so we head out to 800' and we picked up a lone tuna about 7 lbs. Continued north and got a lone schoolie dolphin off Delray off a nice little rip with some decent weeds and debris on it. Worked it for a while with nothing else. Trolled in to about 600 and picked up another little dolphin. We also had a few misses on what were probably small dolphin. We spotted a piece of plywood in 550' trolled by and got a peanut 'phin. Kept him by the boat and some more showed up, so we threw out a chum bag and started throwing squid chunks. Got one more that was just over 20" and about a dozen that were all about 18" over the next 1/2 hour. The school was huge but we weren't getting any keepers, so we pulled up and moves on. Wish we could stumble on this in a couple weeks when they are of size. So we trolled around to try to find the plywood again with no luck. We were off the martini glass by this time and started to head home about 1pm as it was getting a little bumpy. At least we know the schoolies are starting to show up again. All baits were productive. Sorry no pics but it started pouring as we got back to the dock in LHP.
0 · Share on TwitterShare on Facebook