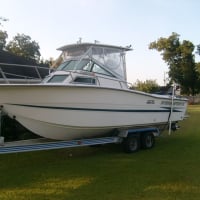 Well, if you’ve been following the Celestial Crab adventures you’ve seen that we got the Celestial one into her first ever Cobia the end of May aboard Marines Dream with Big Bend Gyrene and Sharkman; our son Josh caught/ tagged /released one as well. We then had the opportunity to repay the captain & took BBG out with our family on the CC and put him on his first ever Red Snapper, a not too shabby 22 inch fish. After a long day shuffling back and forth from Carrabelle River for forgotten bait and Celeste’s uncle Charlie we finally found fish for John and it certainly made mine and Celeste’s day, I hope John was happy with his catch as well since he was certainly the hot stick that afternoon with the snapper, a red grouper and guess what a cobia!

I think BBG’s first mate Sharkman was feeling a little left out since he was out of town for that trip and couldn’t make it, so Celeste and I offered to take him on the 25th with our regular (red2) fishing buddy Larry and our (red3) daughter Emily, Sharkman made the 6 am boarding call and off to the southern waters we went stopping to visit our local live bait store. We left the bait catching up to Larry, Emily and Sharkman after Celeste’s first load of baits landed a sabiki hook into the forehead of our guest Sharkman who was graciously trying to open the live well hatch and snagged a hook instead LOL, so we left it up to the other trio to throw baits over the gunwales of the CC for the awaiting Celeste to pop of the sabiki rigs into the live well. Emily sure seemed to steal the show as she managed to catch the good stuff (live cigar minnows) more readily than the other two. We had a little fuse issue shortly into the bait frenzy so we made the wise decision to head back up to C-Quarters to get a pack of glass style fuses; I had plenty of spades, but like always you don’t have what you need so before running to fish we had to run back in and then back out of the river, Déjà vu just set in, I wonder why??

Finally we get to fishing or running to go fishing and the big schools of bonito show up and of course we have to play with those for AN HOUR! Hooking one on top water and then Larry hooks a good king for a while then another unknown beast takes about half a spool of line before finally popping the leader so everyone is pumped up from all the action and we’re still seeing birds and bonito busting everywhere but I stop the chasing and call lines in for a run to the bottom numbers.

First stop we about threw the Sharkman over because that’s all anyone could catch was SHARKS!

Finally, some moving around and a sea bass shows up, but still 0 big fish in the boat and I have to make the call to find more productive numbers and I said hey why not go give the spot BBG caught his first snapper a looks see??!! I am not on the spot 10 minutes and Sharkman thinks he’s into another shark, but the wise Red ones could tell something was different and finally we see their hair color emerge from the depths and the “Crabby” captain puts the boga on Sharkman’s first ever Red snapper!

Fishing the spot more thoroughly this trip produced quite a good show of fish as Celeste brought in one of the biggest Triggers I’ve seen, Larry battled (shark) after (shark) TWO 24 inch red snapper he thought were sharks! Poor Emily was the sea bass and shark queen and took a nap and I put the hurt on some sea bass for her on a light jigging rod also made some sport of some small red grouper on the light tackle and finally Larry hooks a keeper red grouper which woke Celeste out of her bean bag nap on the bow. She climbs back to the fishing end of things, puts a freshly butterflied hardtail to work on a double dropper rig with some squid attractant on the upper hook; which a sea bass quickly hits, but instead of reeling it up Celeste left it to soak with the hardtail and is abruptly slammed to the gunwale and starts grunting up a big fish, some encuraging words later and the Celestial one turns the boat red again this time with a 12 lb red grouper (and the keeper sea bass on the other hook).

Well the fish tails are getting deep so we’ll end the story with a big thank you from the Captain to my crew, the ever present Lord our God who makes this possible and his believer our friend BlueH20Fisherman who also makes this all possible . I also want to thank those forum members for their helpful fishing advice (you know how you are) the staff at C-Quarters for always being friendly and accommodating and the chef at the Pit Stop restaurant for fixing this crew a feast of feasts from the days catch.

Also want to say special thanks to that wonderful woman I have been blessed to share the last 7 years with Happy Anniversary Love! Thank you for putting up with this old Crab.
OH BTW we took Wednesday off for our Anniversary drove back down to the coast and stopped in to see some restaurant friends in Apalachicola! This was done at Up the Creek Raw Bar by Chef Bret with one of our Snapper from Saturday. AMAZING!