JerryB Posts: 189 Officer
December 2011 in Southeast General Fishing & The Outdoors #1
The team gathered at Captain Jerry's house to board the Lucky Us at 6:45 AM. On board with the Captain were Dan (Reel C's), Bo (Let's GO) and Eric (Plane N Fish. What a Motley Looking Crew.:grin Got out to 1 to 2 seas, 11 seconds per NOAA and guess what, they were wrong.:huh Was 2 to 4 and 2 seconds, a very rough, choppy sea but fishable.
Set a nice spread at 90 ft. and headed east to about 180. Heard radio chatter about someone losing a 75# Wahoo at the boat. Nothing had happened and suddenly the left rigger went off and everyone made a dive for the rod but Bo prevailed and the fight was on. Could see action on the surface way back but not jumping, just skirting the surface. Cleared all rods and Bo did a masterful job of getting the Man in Stripes to the boat and Eric put the gaff to him and invited him on board for dinner. High five's around and then set up again. Had what turned out to be a small shark messing with a bait and Dan teased him into a hook up and release. Stayed in 90 to 180 water all day just South of the inlet. Suddenly the left rigger went off again and this time Eric was the man and it also was a Wahoo but a little smaller, Bo on the gaff. I'm guessing 40# on one and 30# on the other, may be a little high but they sure made a bunch of nice filets. Both Ho's hit a skirted Ballyho which was pink and black. A great way to end the year and a good time was had by all.:thumbsupTally was 2 for 2 on Wahoo's and no other hits but for the Shark.
HAPPY NEW YEAR:) 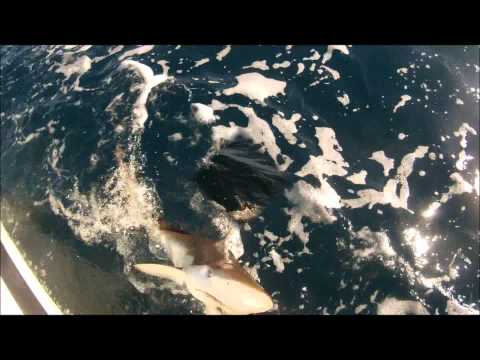